Hey, Manchester Gamers! As we race to the finish line of 2020, it’s time for another GAME ON article!

I know we’ve all been busy with Christmas and getting ready for new years 2021, so let’s take a time out and ‘relax’ to a game we can all play! This holiday season come check out ROCKET LEAGUE!!

Welcome to Rocket League, where we play soccer from inside of a car!

Ever wanted to play soccer with your car? Crazy right? WRONG! Welcome to Rocket league, a highly popular video game that throws you into high-octane action-driving from the start by playing the world’s most popular sport! Rocket League is a cross-genre arena battler so have fun with friends on Xbox, PlayStation, Switch & More!

Rocket League offers both the casual and competitive atmosphere to fit your liking. Rocket League is one of the most popular games streamed on Twitch.TV. Almost at any given time you can find a RL stream online. Rocket League has 10.9M followers on Twitch so the games community is HEALTHY & THRIVING! Here is a link to the Rocket League Category on Twitch.TV

Rocket League has up to 8 players assigned to each of the two teams, using rocket-powered cars to hit a GIANT ball into their opponent’s soccer goal, just like real life soccer! 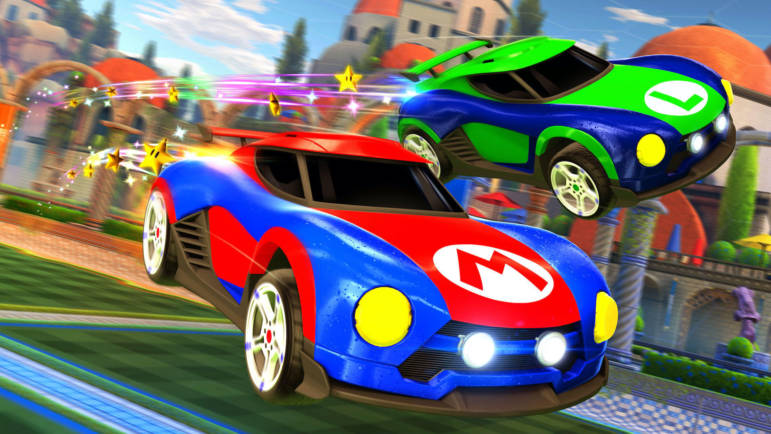 Players control a rocket-powered car and use it to hit a ball that is much larger than the cars towards the other team’s goal area to score goals, in a way that resembles a soccer game, with elements reminiscent of a demolition derby. Players’ cars have the ability to jump to hit the ball while in mid-air. The players can also pick up a speed boost bypassing their cars over marked spaces on the field, enabling them to quickly cross the field, use the added momentum to hit the ball, or ram into another player’s car to destroy it; in the latter case, the destroyed car respawns moments later on a random side of the field. A player may also use a boost when in the air to propel themselves forward in flight, allowing players to hit the ball in the air. Players can alter their car’s orientation while midair, which combined with midair boosting allows for controlled flight. Players can also perform quick dodges, causing their car to do a short jump and spin in a given direction, which can be used to nudge the ball or gain positioning advantage over the other team.

Matches are usually five minutes long, with a sudden death overtime if the game is tied at that point. Matches can be played from between one-on-one up to four-on-four players, as well as in casual and ranked playlists. The latter serves as Rocket League‘s competitive online mode, where players compete in various tiered ranks within game seasons, with victories or losses raising or lowering a player’s rank, respectively. The game includes a single-player “season” mode, with the player competing with computer-controlled players.

Explore a whole new world that is Rocket League!

So like in normal Mike Lowe Fashion, I want to leave you all with a reveal trailer so you can see how much fun this game is for 2020 and hopefully you will play deep into 2021!