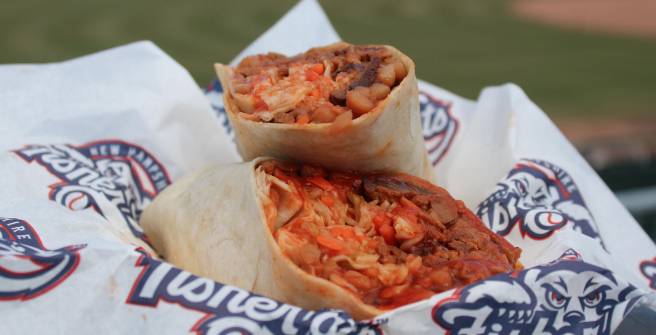 The Quadruple B has advanced to the semifinals of the 2018 Bush’s Baked Beans Home Run Recipes contest.

Beginning on June 1, the contest launched with 60 recipes from all over the minors, with the Fisher Cats’ Quadruple B surviving to now face the Pensacola Blue Wahoos’ dish: Bush’s BBQ Falafel and Pulled Pork platter.

The Double-A affiliate of the Cincinnati Reds, Pensacola’s entry combines onions, herbs, garlic and seasonings combined with Bush’s BBQ baked beans in a mixture that is deep fried and then served atop a bed of slow roasted pulled pork and “slaw-dressing” sauce.

“It’s a complete backyard barbecue wrapped in a burrito blanket,” said Fisher Cats President Mike Ramshaw. “I’d put the Quadruple B up against any ballpark menu item in the country – it’s that good.”

The contest ends on June 20, with fan voting underway at the Minor League Baseball website’s page for the contest. Fans can vote for their choice by clicking on the white heart within the entry’s picture.

Win or lose, Fisher Cat fans can taste the Quadruple B next time they head to Northeast Delta Dental Stadium, with the dish sold on the concourse behind section 111.