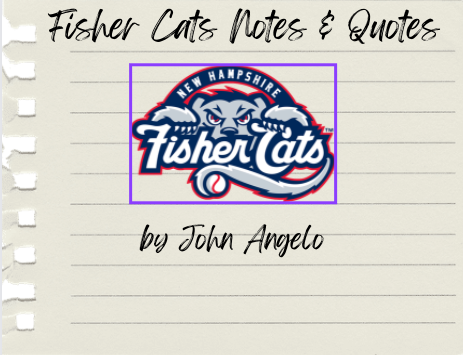 After flirting with .500, the Double A New Hampshire Fisher Cats have dropped four straight at home to the Somerset Patriots, the Yankees Double A affiliate. They’ll be home through June 26 with the Altoona Curve chugging in next.

Thursday night’s game saw three unusual plays. The first was when the Cats Orelvis Martinez hit a rocket to Patriots third baseman Max Burt. In a wise moment of self-preservation, the Patriots infielder brought his hands up in a hurry to preserve vital organs. The ball hit him hard with a flying object visible. Was it his teeth? Burt had popped the chain around his neck in the quick motion and recovered enough to get Martinez at first. Fortunately, the chain flew away from the play. “Third Baseman Hoisted by His Own Petard” would have made for an uncomfortable headline.

The Cats had been teeing off early on Pats’ pitcher Mitch Spence. Left fielder Cam Eden made that clear when he tagged a liner right at Spence an inning later, one of three line drives he hit in the game. In a wise moment of self-preservation, the pitcher brought his glove hand up in a hurry to preserve a vital organ, namely his brain. Eden’s bullet hit Spence’s glove hand so hard the glove headed toward the second baseman while the ball dribbled clear. Infield single.

Call the third play “I Almost Fell to Pieces.” It resembled Yankee infielder Billy Martin’s key grab of a Jackie Robinson wind-blown pop-up in Game Seven of the 1952 World Series. In this case, Fisher Cats catcher Charlie Clarke took a bead on a pop-up while rotating to face the plate. He threw his catcher’s helmet behind him, right into the path of charging third baseman Luis De Los Santos. De Los Santos came close to stepping directly on the helmet, but lunged late to catch the fair ball one-handed.

Outfielder Cam Eden is looking tons better at the plate. We caught up with him pre-game Wednesday. Our first impression was that the kid is refreshingly no stone-faced Bill Belichick. Gotta be the California sunshine.

“There’s definitely a difference between the pitching in A and Double A,” Eden said. “It’s more consistent here-the consistency of the velo (velocity). I think you just get more fastballs in Low A. Here, if they see you can’t hit a slider, well, that’s what you’ll get a lot of. The pitching is better overall here and the off-speed pitches are better too.”

Eden pointed out the tricky right-field fence at Delta Dental, noting that the several feet of brick above the padded wall can result in the ball kicking off the brick unexpectedly hard.

“You don’t get many flat fastballs at this level,” Eden said. ”It’s guys who have a rise, a sinker or a cut. There are times I’ll sit on the off-speed. My problem right now s seeing the off-speed and swinging too early. I’m just a little too up front.”

Eden, who hails from Sacramento, is excited about his parents visiting next week. He admits to Double A being an adjustment, of pushing himself too hard his first week here. Then again, New Hampshire is already his third stop this season. If it’s Wednesday it must be Manchester. We look forward to seeing him play more. The 6’2” 195 lb. player has what the coaches call “wiry pop” to his bat. He cleared the bases with a hard-hit double in the Cats 5-4 Tuesday loss to Somerset.

The Altoona Curve is a hairpin track turn just outside of Altoona, Pennsylvania. If the train is long enough, one can see the second half of the train from the first half. It’s like slowly watching your investments go by these days on the Dow Jones Flyer.

Marketing Director and between innings emcee Maddie Saines is playing through the pain. The 2021 Cleveland State University grad was within three figure-skating forms of National accreditation but has undergone surgery for a torn ACL in her knee and for calf muscles that are strung too tight.

Still, her optimism is infectious and her invention of Pierogi-in the-Pants is typical.

“Corporate clients are great to work with,” she explained. “I did something similar in Akron (Where the RubberDucks are now the Homers!) They don’t want something boring. They want a spectacle. I ordered 2X gray suits from Amazon. Of course I wash them, but I also have people sign them if they catch all the pierogis.”

Saines put a lacrosse stick in the pierogi mix and Jaju pierogis are now flying objects.

The Wheeling, West Virginia native recalled a wedding proposal unknown to the bride-to-be as she was the tosser with her back turned to her beloved. “They got engaged during the production! She said. It was a complete surprise. I’d worked with the fiancée-to-be to coordinate the whole thing.”

Saines works with several spotters who are marketing team members to work the crowd for contestants. Waving helps but don’t literally jump at the opportunity. The marketing department doesn’t want anyone hurt.

“I’ll go into a section of kids and there’ll be like 20 of them,” Saines explained. “I do my best to include as many people as a I can, but I often have to divide and conquer.”

Saines grew up fairly equidistant from the Pittsburgh Pirates and the Cleveland team, but her father was a Cleveland fan and going to games with her Dad were the start of her love affair with the game.

“I want to give these kids the same experience I had, an experience that made me want to work here,” she said.