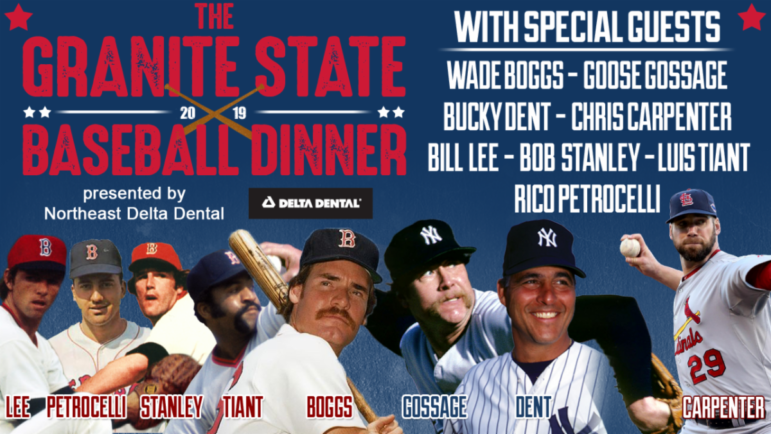 Other speakers include baseball legends Bucky Dent, Bill Lee, Luis Tiant, Rico Petrocelli and Bob Stanley, with an autograph session held between 5 and 7 p.m. before they share stories from their careers and their time inside the Red Sox/Yankees rivalry.

New Hampshire’s own Chris Carpenter will join the festivities, as the 2005 Cy Young Award Winner and two-time World Series Champion continues to donate his time to raise funds for the Children’s Hospital at Dartmouth-Hitchcock and the Fisher Cats Foundation.

Since 2007, the event has hosted over 13,000 guests and donated more than $1.75 million to the Children’s Hospital at Dartmouth-Hitchcock (CHaD) and the Fisher Cats Foundation.

This year’s fundraising event will be held on Saturday, November 23 at the DoubleTree by Hilton Manchester Downtown Hotel Expo Center, with doors opening at 5 p.m.

About Andrew Sylvia 1796 Articles
Born and raised in the Granite State, Andrew Sylvia has written approximately 10,000 pieces over his career for outlets across Massachusetts, New Hampshire and Vermont. On top of that, he's a licensed notary and license to sell property, casualty and life insurance, he's been a USSF trained youth soccer and futsal referee for the past six years and he can name over 60 national flags in under 60 seconds according to that flag game app he has on his phone, which makes sense because he also has a bachelor's degree in geography (like Michael Jordan). He can also type over 100 words a minute on a good day.