WASHINGTON, D.C. – According to a recent study done by the financial website WalletHub, Manchester is 4th best out of 180 U.S. cities when it comes to unemployment trends.

In the study, Manchester was tied with Miami and Springfield, Mo. with the best June 2022 unemployment rate in the country at 2.0%. Manchester’s unemployment dipped 82.14 percent from June 2020 to June 2022, putting it only behind Orlando and Garden Grove, Calif.

“The numbers for Manchester indicate that the city is among those with the best labor market recoveries from the (COVID-19) pandemic,” says WalletHub analyst Jill Gonzalez. “Right now, Manchester has fewer unemployed people than it had before the pandemic.”

Nationwide, Gonzalez says that labor shortages began with those being laid off during the pandemic not returning now that the pandemic has subsided, with only a quarter of those laid off returning.

“If the shortage continues, there could be rising wages and even more inflation in the short term. In the long term, it could slow or stop GDP growth and bring about a recession,” she said.

Nashua also made the list, at No. 8. The full study can be seen here. 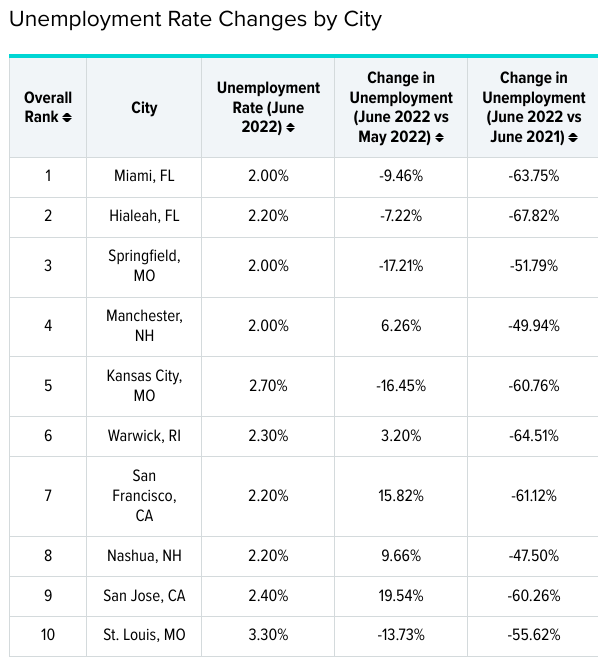