It’s no secret that we, the people of New Hampshire, love to drink. We rank 9th in the country for breweries per capita, having more doubled our number of craft breweries since 2014. With so many options to choose from, how do you know where to go? What do you drink when you get there? Who are these people making your beer? We’ve set out to find these answers for you, the hard way – one beer at a time. Featuring one location every week, we’ll provide you with a guide to all your friendly neighborhood brewers.

So relax, crack open a cold one, and welcome to the Fellowship of the Hops. 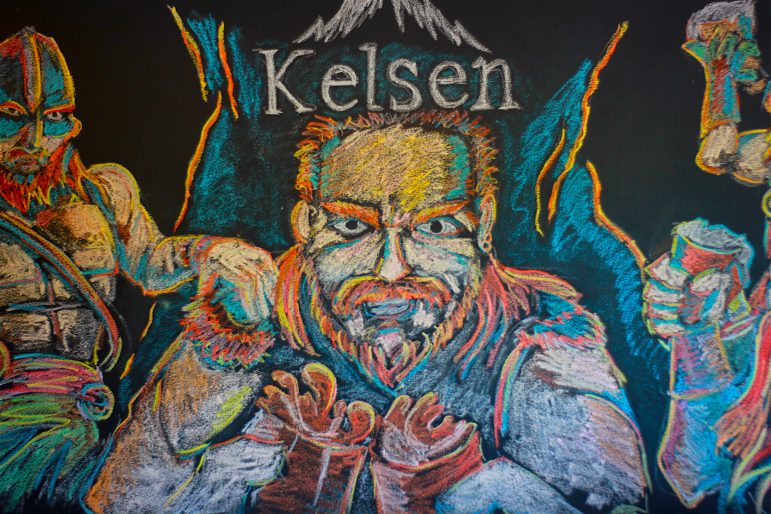 DERRY, NH – Anyone who’s seen one will recognize a Kelsen beer. A 16-oz. can sporting a cartoon-ish, axe-wielding Norse warrior on the label; an equally World-of-Warcraft inspired dwarf on another. They stand out on the shelf.

Anyone who’s tried one knows that the taste deserves equal distinction.

Paul Kelly, owner and co-founder of the Derry-based brewing company, has a well-secured foothold in a market that is constantly changing and adapting. But for Kelly, it’s all about experimentation. “I love the process of making beer,” he says. “Now that it’s going well, we can go back and say, ‘OK, I want to try all these different styles of beer.’”

When Kelly was starting out he skipped the John Palmer stage of hobbyist brewing and got right to the nitty-gritty. “If you understand the theory – why the beer does what it does – you can do a lot,” says Kelley.

That same year, Kelly took home two more at the U.S. Open Beer Championship. A bronze for their double IPA, and a gold for their Brown.

The Paradigm Brown Ale went back-to-back gold at the U.S. Open Beer Championship the following year. The crew re-entered Paradigm in the GIBF for 2015, and that year left with the brew’s third gold medal. Kelsen’s Battle Axe took home the gold for IPAs.

With a permanent place on taps at 7th Settlement in Dover and 900 Degrees in Manchester, Kelly has reason to be optimistic about the future of Kelsen. But beneath the massive fermentation tanks and ‘80s N.W.A. memorabilia that adorn his loading-dock-turned-brewery, he is all modesty.

“I’m just happy people are buying my beer,” he says, gazing at the medals on display in the front room of the facility. “I still get pumped when I win something.”

Kelly’s brewing career may be marked by more accolades than the average kit-and-barrel production, but he started out in much the same way as many who try their hands in home brewing: in the driveway.

It all started in 2011, when Kelly and a longtime friend had a not-so-novel idea: ‘Let’s make some beer.’ At first it was all yeasts and yuks – they brewed enough for their friends and themselves to keep a small stash, but it wasn’t long before something unusual happened.

“We wanted to do something different. We wanted to make a hoppy-brown,” Kelly recalls. “We wanted a brown that had more flavor.”

When he tried that first batch of what would become Paradigm Brown Ale, he knew he had something special. “We said, ‘hey, this is something way different than we’ve ever tasted. It’s a different kind of brown… it’s the reason we started up.’”

Kelly decided to open a facility in Derry, a significant step-up from the driveway.

“We went from a 20-gallon driveway system to three barrels, to seven barrels…and just continued to grow,” says Kelly. Three months later he quit his job in finance. “If I was going to actually make this work I had to quit my job,” says Kelly. “It was either I’m going to make this work or I’m not going to bother.”

Kelly knew he was on to something. That once-in-a-lifetime, “ah-ha!” moment when friends with a common interest create something valuable and new. The way Seth Rogen and Evan Goldberg must have felt when they wrote Superbad, or when Jimmy Iovine turns to Tom Petty and says, “we’re gonna be rich.”

Kelly sees himself as better off for his late-in-life career change. “I don’t miss doing what I used to do. I love doing this.”

Eight months after Kelsen opened its doors, they were taking home the gold in the American Brown Ale category from the U.S. Open Beer Championship.

Today, Kelsen has three full-time employees and part-time help on the weekends. Kelly is still occasionally involved in beer-making – he brews the second batch of all quad-batches –  but the daily chores of running the business take up most of his time.

Still, his passion for experimentation sets the tone at Kelsen. That, and his love of ‘90s hip-hop, which is on heavy rotation on the brewery’s sound system. The 6.7 IPA is a rotating batch, made totally different every time, though it’s still an IPA and maintains the same ABV. “We use different hops, different wheat,” says Kelly. “That’s why 6.7 is great, it’s made to be changed.”

According to Kelly, the future of Kelsen will be more risks and new challenges. “As long as I can keep my production with Battle Axe and Paradigm… we can go beyond that to new beer styles.” Future productions will mostly be tasting room only, if not very limited in the marketplace. 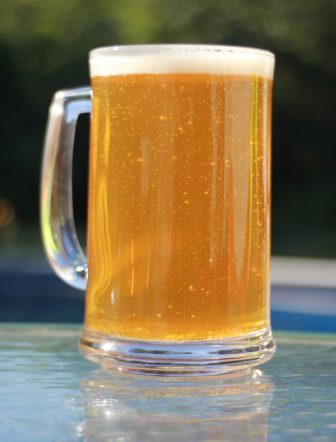 A refreshingly hoppy IPA. It’s well balanced by wheat and rye malts which are present in the base of the mouth at the consumption’s genesis, gradually phased out by complex, heady hops that flitter about the tip of the tongue and roof of the mouth, providing a warm, gentle tingle, which lingers long beyond the final swallow.

The hops greet you, and the malts invite you in. Ultimately, the hops stick around like a close friend come to visit from far away, and even though their stay is extended, you don’t mind – you even allow yourself an extra night in their guest room. You enjoy the company and don’t want the moment to end.

Kelly anticipates rolling out 10 to 15 kegs of his newest brain-child, which (spoiler alert) may or may not be a Saison.

“I’ve been really liking the Saisons,” says Kelly. “They’re just a funky, farmhouse-style beer… I want to get more into the Belgian style. The farmhouse has so much variety, you can do sage and juniper and add fruit to it… we’re probably gonna make one of those soon.”

For Kelly, drinking beer and making beer are the same passion. “It’s hard not to drink a beer and think, ‘oh, we could do this,’ or, ‘what if they added that?’” he says. 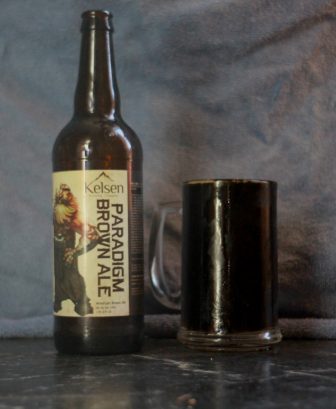 Dark color, deep amber, mostly opaque. Light, full bodied foam. Smells of dark, chocolate malts and caramel, which can be felt percolating up through the frontal lobe. A joyful scent.

A slightly hoppy brown, where the malts lead the charge but the hops bring up the back of the brigade. It’s deep, it’s dark, it’s sensual.

Dark chocolate malts melt right into the tastebuds, as if someone had laid a truffle upon your tongue. Caramel flavor intensifies as the beer airs.

Smooth. Sweet but not too sweet – wouldn’t quite call this a dessert beer. One of the most drinkable browns I’ve ever encountered.

The crew at Kelsen liked their newest experiment, a Belgian White currently on tap, so much that they had a signature warrior label made up and started canning it for distribution.

“It’s hard to perfect it because everyone’s palates are different, but as long as it’s perfected to where I like it, then somebody’s going to like it,” said Kelly with a grin.

And what’s with the Medieval warriors on the label? 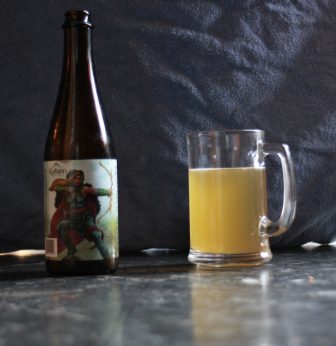 Lemon, lemon, lemon. Warhead. Nutty aftertaste. Walnut? Cashew? Hazelnut? First this beer kicks you in the mouth, then it kicks you while you’re down. The nutty aftertaste grows stronger on the tongue in between swigs. Drinking this beer is such a shocker, it makes you want to throw your hands up and shout.

Kelly explains that it was inspired by his partner, the childhood friend from way back in the driveway days. He was of Norwegian descent, and the two found it amusing to give their beers warrior-type names in the Norse tradition.

Since Kelsen opened its doors, seven more breweries have sprung up in the immediate area. It’s that type of growth that causes some to call the craft-beer market unsustainable – that, and a marginal decline in new openings – but Kelly is optimistic.

Along with new beers and new Medieval labels, Kelly expects that within a few years (second spoiler alert) there will be a new and improved Kelsen Brewery. 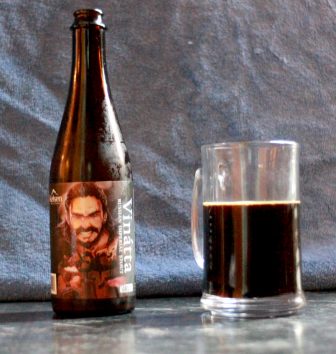 Pours like motor oil. Thick, beefy – blood brown. Dark, entirely opaque, almost black. No foam at all, or very little to speak of. Looks like a cold brew coffee. Smells like a womb of malts. A river of malts running down your nose. Toffee.

Flavor profile literally beyond comprehension. Strong, sweet, sour, smooth, thick… imperious. It has the bright vanilla, dark, smooth feeling of a stout, almost immediately balanced by a bitter root-like flavor in the back of the palate.

Dark and complex, like a midnight in Paris. A dance of toffee on the tip of the tongue. A down blanket. A gentle, wet kiss on the neck of your lover, followed by a deep slumber.

It’s a move of necessity. The state has talked about putting an exit off of Route 93 right through their current location. Kelly says he hopes to stay in the community that has supported him the past six years.

“We’ve been known as a Derry brewery and I don’t want to change that,” he says. The new facility is rumored to have a larger tasting room, and one might speculate, a larger brewing facility.

Kelly goes back and forth between average beer-maker and aficionado. “I’m a normal guy,” he insists, “I like pretty much anything. When I go hang out with my dad we’re drinking Coors.”

But when asked about his process, it is clear that Kelly’s palate for complexity never really turns off.

Keep on getting there, Paul. The Fellowship of the Hops is along for the journey. We’ll be right behind you.

The Fellowship of the Hops is comprised of Bill Robidoux and Eli Maroney, two local reporters here at Manchester Ink Link.

If you have a favorite NH brewery you’d like featured, give us a shout at nhbrewtour@gmail.com.