Everyone knows Zevos.  Everyone has seen Zevos play in one form or the other.  The Manchester musician is likely someone you’ve either followed, stumbled upon or maybe heard just once play alongside one of his many bands and projects — from classical music, to hippy shake to greasy rock and roll.

The man does it all, literally, with a guitar in hand.

“Lichen,” the band John Zevos has led for over 30 years, was born out of Plymouth State, a hotbed of college rock back in the ’90s. Many of those bands never made it past playing those beer-sticky basement floors.  But John has because John has never stopped playing, writing, teaching, ripping, gripping and singing his heart out.

Countless shows, endless hours loading and unloading equipment, playing to nearly empty bars or packed small arenas, it doesn’t seem to affect the level of intensity or professionalism that John puts into his work.  He is there to entertain, influence and inform your soul of the power of music.

This Friday night at 7 p.m. at the “Spotlight Room” on Hanover Street, John and his trio, Divergent Strings (Wayne Hughes and Roger Ramirez), will play a wide variety of music, from classical to South American to Spanish with original pieces and fresh arrangements of rock tunes mixed in.  You will hear them play variations of the Beatles, the Eagles, Stones, Grateful Dead songs.

“People really enjoy our versions of these tunes played on classical guitar and mandolin, “ said Zevos.

I suggest you get your tickets here (just $15 bucks) and gift yourself a little something that will enhance your life.  Pay yourself back.

Till then, enjoy the interview GSM did with John Zevos, below. 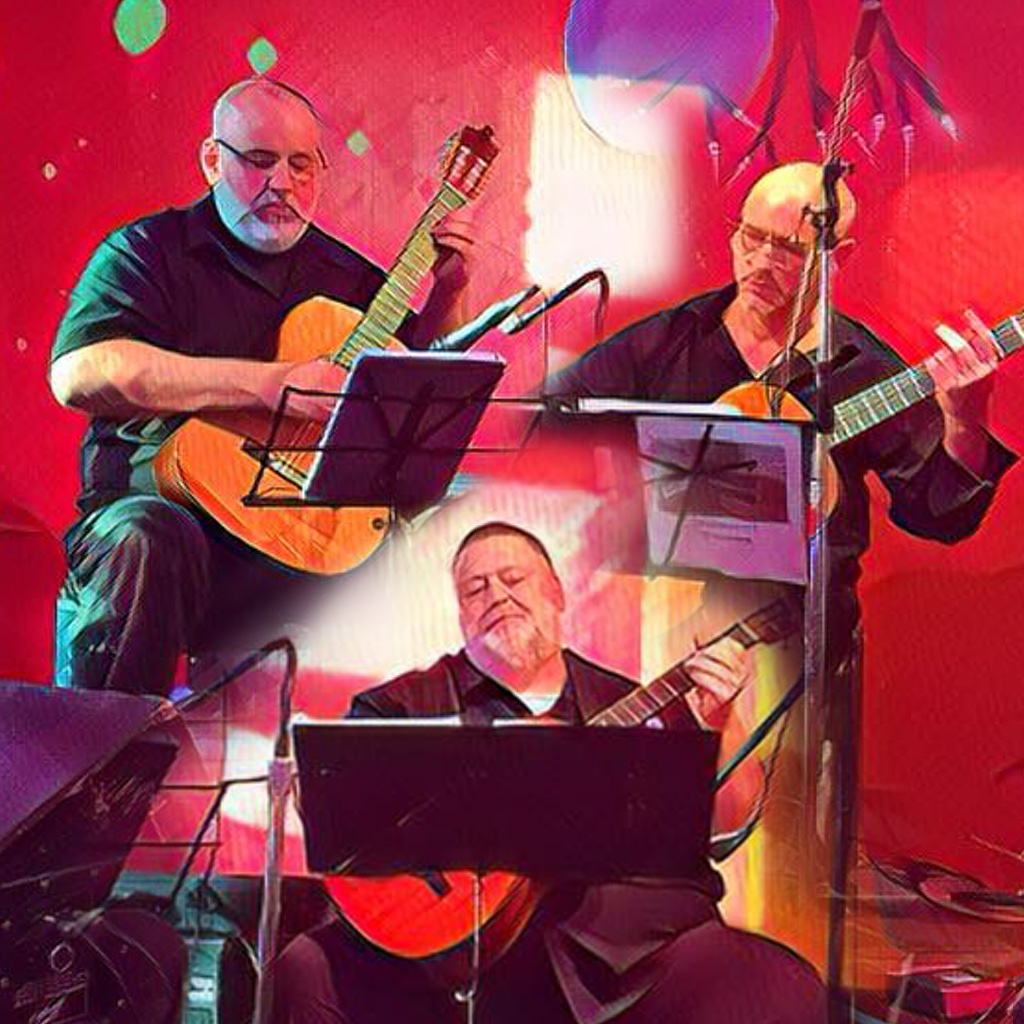 Q. This style of classical guitar playing can enhance any listeners’ lives.  But how has it enhanced your life, John?

I find that playing classical guitar really improves my playing in all styles of music.  I first noticed this when I was going to Plymouth State in the 90’s. I was studying classical guitar pretty heavily while playing a lot of rock, bluegrass, and Irish gigs.  So I guess it enhances my life by making me a better guitarist which is a big part of my life.

Q. Is there much of a mental transition taking place when you go from a Spanish song to a Rolling Stone song?

For me, there isn’t a big mental transition going from a Spanish tune to a Stones tune because I have arranged the rock tunes to fit the classical guitar trio format and I love both types of tunes.

Q. As the longtime leader of the rock/country/hippy/jam band, Lichen, how do you move so effortlessly from these different formats of music?  Is it your inner cycle that needs variety or just a need to jam out to anything?

As for moving between all of the different styles I play, I guess it is in my inner cycle.  I made up my mind long ago to only play music that I really like because music means so much to me.  I’ve had offers to play in bands that made more money playing stuff I really wasn’t into, but I always decline.  Luckily for me I like quite a few different styles of music and my two main instruments, guitar and mandolin, are two of the best instruments for many genres of music.

Q. Recording classical music in a quiet space is one thing.  But, how do you approach the music for a live show?

The way I approach playing classical music live depends on where we are playing.  Divergent Strings has played quiet concert halls, breweries, libraries, and once even the SNHU Arena.  For the places with a lot of background noise we have to use microphones and project more. One thing I love about this group is that we are bringing the classical guitar trio to spaces where it has never been before.

Q. Musically, what’s the hardest song to play in your set list and why?

Our most difficult piece is the “Rondo for Three Guitar” by Paul Hindemith.  It has a lot of uncommon tonalities and tricky rhythms but we all love it and when we nail it, it is a great feeling.

Q. The Manchester Community Music School Folk String Ensemble is joining the trio on Saturday in the Spotlight Room.  That sounds big and daunting. But fantastic! What can the audience expect?

The Manchester Community Music School Folk String Ensemble is a group that I started and directed.  That group will be performing some European folk music, an Irish reel and even a Beatles tune. For the finale of the show we will all play together on “Ashokan Farewell” which was the main piece used in Ken Burn’s Civil War film.  It is a beautiful melody and the two groups sound great together playing it.