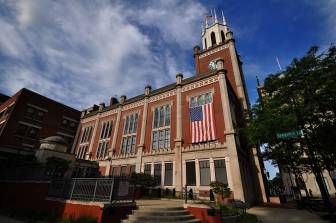 MANCHESTER, NH – Official election resultsare now available on the city’s web page. A total of 22,830 votes were cast during the Non-Partisan Municipal General Election held on November 7, 2017, at Manchester polls. This total represents a 40.8 percent turnout of all registered voters in the city, and the highest number of votes cast in a city election since 1999.

No significant changes to outcomes from Tuesday’s election resulted in the final tally of hand-counted ballots.

City ballots also featured two questions – the first seeking approval for Keno in the city of Manchester and the second seeking voter support for one of four options to represent the city as the official flag of Manchester. While Keno received 58 percent of the vote (13,293 “yes” to 8,315 “no”), the current City flag was supported overwhelmingly by over 76 percent of all Manchester voters receiving 17,411 votes on Election Day.