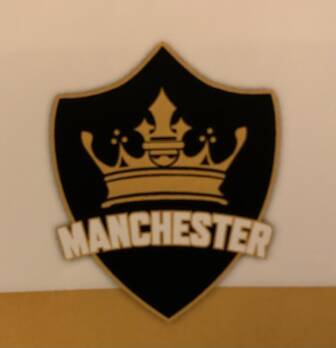 The Kings (2-1-0) blew the game open with four goals in the third period, including in a span of 52 seconds.

Trailing 2-0 entering the third period, Nashua South had a golden opportunity to make a game of it with two power plays in the first seven minutes. But not only was Manchester able to kill off the power plays, they added to their lead.

Nashua South had another chance to climb back in the game when Manchester defenseman Mack Tripp was sent off for roughing, following a brief scrum in front of the Kings’ net. This time, Manchester didn’t wait for the penalty to expire. Duclos picked up the puck in the neutral zone and made a brilliant rush. He used a nifty deke and draw sidestep a defender, walked in on Veilleaux and slipped it through the five-hole for a shorthanded goal, making it 4-0 win 7:36 left to play.

Manchester co-head coach Eric Fisher said it was good to see players get rewarded in the third period for the hard work they had put in all game.

“They can’t start off fast and then slow down, that’s been really tough for us. But they really maintained (the effort) and that’s what we’ve been working on.” said Fisher. “I think we are on a good trajectory. They guys are starting to feel it. It’s coming together.”

This is the first season in which all three Manchester public high schools have combined for a co-op team. Last season, Memorial enjoyed some success while playing alone in Division 2. Meanwhile, the Central/West co-op team struggled through a winless campaign in Division 1. So part of the challenge for coaches Fisher and Chuck Goss has been to finding the right chemistry with players from three schools and two previous teams. That process has been further complicated by multiple early season game postponements. The win over Nashua South kicks off what promises to be a very busy few weeks for the Kings.

“We’ve got three games next week and I think that’s the way it’s going to be for a while,” said Fisher.

Against Nashua South, Manchester got off to a strong start, thanks to a pair of first-period goals by Duclos. He opened the scoring just 4:30 into the game when he picked the pocket of Nashua South defenseman Ryan Duscharme, walked in alone and beat Veilleaux to the glove side. That type of aggressive forechecking by Manchester gave Nashua South fits throughout the game.

“We try to tell the kids they have to set the tone and they have to start it right from the opening faceoff,” said Fisher. “When we come out and we set the tone, we’re not allowing them to come back into our zone and put on those heavy shots (on goal) that we faced last year.”

Later in the period, Duclos added a power play goal, converting a beautiful feed from Fields (3 assists) in the slot and snapping a wrist shot just under the cross bar to make it 2-0.

“(Duclos) is one of those players that you wish you had 10 of him because he plays so hard. He’s dedicated, he’s diligent and he just works. He’s a grinder,” said Fisher.

Aside from those two goals by Duclose, Manchester spent much of the first two periods frustrated by the outstanding play of Veilleaux (30 saves). The sophomore made some terrific stops to keep the Titans in the game.

On the other end of the ice, Manchester junior Landon Wilson wasn’t facing the quantity of shots as his counterpart, but while the score was still close, he made some excellent stops to keep Nashua South off the board.