The Currier Museum in Manchester is putting us all on notice. They don’t just hang pictures on the walls anymore, people. They’re getting downright funky!
Killer Heels exhibitions, Moulin Rouge shows, and now, come Friday night, a couple really fantastic national performers named Will Porter and Carmen Nickerson will take to the stage of the 185 seat music hall inside the museum.
Concord’s own country recording artist, Dusty Gray, is opening the show.  So, bang!
Peg Gaillard has been a trustee at the Currier for the past seven years, and last fall she started the “Side Door Music Series,” looking to build not just a night of music for the patrons, but a whole experience that goes far beyond a fishnets and murderous stilettos.
“The Side Door Series” has a Prohibition feel to it, something out of the speakeasy days, which seems to be making a comeback. Good food, a secret “side door” entrance, incredible music, professional sound and some good old community love.  And maybe a gin and roses at intermission.
GSM caught up with Gaillard and she did a fantastic job selling the “Side Door Music Series.”
Let’s see what you think.

Q: Do you think people would be surprised to know how great of a little venue the Currier has for music?

I’d like to think that people will be delighted rather than surprised by the 185-seat venue, I guess. Over the past several years, the Currier has consciously created unexpected, “out of the box” offerings in an attempt to broaden our audience (this past summer’s Block Party, the Moulin Rouge extravaganza in November, the Killer Heels exhibition of 2016, the Alzheimer’s Café Program, and most recently, the Currier’s program with Partnership for Drug Free Kids to work with families impacted by the opioid crisis, as a few examples). With this series we’re trying to do it once again. The name of the series “The Side Door” elicits a bit of the old-time speakeasy vibe: those “in the know” enter through the side door. And, sure enough, for these concerts, patrons enter through the side door (usually used only by museum staff) on Beech Street rather than the formal front entrance of the museum. Once inside, the setting feels like a hip, happening night club! Fun!
Q: How do you decide which artist to book for a show? Is this based off your own personal musical taste?
There are few things I love as much as the Currier Museum but live music is one of them. I seek out live music wherever I go. About five years ago, my husband and I created a music series in our hometown of Exeter. Through that experience I established connections with a few different music agents and cut my teeth on the ins and outs of booking artists and setting up concerts. I go to music festivals of all sorts — last year I went to Firefly in Delaware and also, FreshGrass out in North Adams, MA and countless concerts from Austin, Boston, Cambridge and beyond. The group we have committed for the June concert is one I saw at FreshGrass last September. I look for individual performers and groups who have serious talent, coupled with clear passion and joy for what they do, combined with exceptional audience rapport.
Q: How did you decide to have Dusty Gray as an opener?
The Currier Museum of Art has long been dedicated to finding and featuring local artists. This mission is in the museum’s blood, so to speak. So featuring local talent in The Side Door Music Series was fundamental. To create an exceptional series, we’re dedicated to including and highlighting local talent while also featuring nationally acclaimed artists. Dusty Gray is born and raised in Concord, NH and an established talent. His full band, The Dusty Gray Band, formed in 2013, has opened for countless big acts and he is a notable musician and song writer in his own right. His song, “Let the Rain Come Down”, performed by Brent Cobb was nominated for a Grammy in 2017. Dusty Gray’s charismatic booming, gravelly vocals and distinctive songwriting will be a unique treat for the Side Door audience and the perfect complement to Willy Porter and Carmen Nickerson.
Q: Are there other venues throughout the state that you visited and felt inspired to do your own thing?
There is so much incredible music talent at our doorstep! Manchester was lacking a vibrant, eclectic, mid-sized music venue and we saw this as an opportunity to both fill a need and broaden our audience. Museums can’t remain vital by offering a one-dimensional art experience: art hanging on the walls isn’t enough anymore. I like to think of the Currier Museum of Art as the new cultural arbiter for the Manchester area offering a unique and expansive art experience.
Q: In your mind’s eye, what does a perfect night of music look like at the Currier?
The side doors of the Currier open at 6 p.m. to a large crowd of concert goers eager to enjoy some food, drink and community connection before the show. It’s a sold-out show and everyone is abuzz. The audience consists of engaged music lovers and Currier enthusiasts of all ages: some familiar with the featured artist, but many merely interested in experiencing and supporting amazing live music in this unique space. The audience and artist bond during the concert is intimate, joyful, dynamic and energized. Everyone, including the performers, feel a high come the end of the show and leave the venue knowing that they shared in a truly awesome experience. As people exit they eagerly ask: “When is the next Side Door concert?” To answer that question: The next concert is Friday June 8 and will feature the band Whiskey Treaty Roadshow from Western Massachusetts. 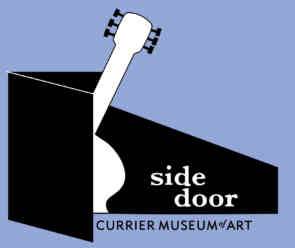 Q: OK… For those who don’t know Will Porter, sell him for us… Go!
Performance Trifecta.  Extraordinary talent (guitarist and vocalist) in his own right and paired up with Carmen Nickerson, an even more amazing treat.  Delightful, engaging performers: funny, sincere, humble songs and lyrics that are sophisticated, funny, poignant, rockin’ and smile-inducing.

Advance tickets $25, tickets are $30 at the door. 6-10 p.m. at the Currier Museum, 150 Ash St., Manchester NH, which features cash bar and buffet dinner/snack menu options for sale on site.        ⇒Click here for more details about the Currier’s “Side Door Music Series.”