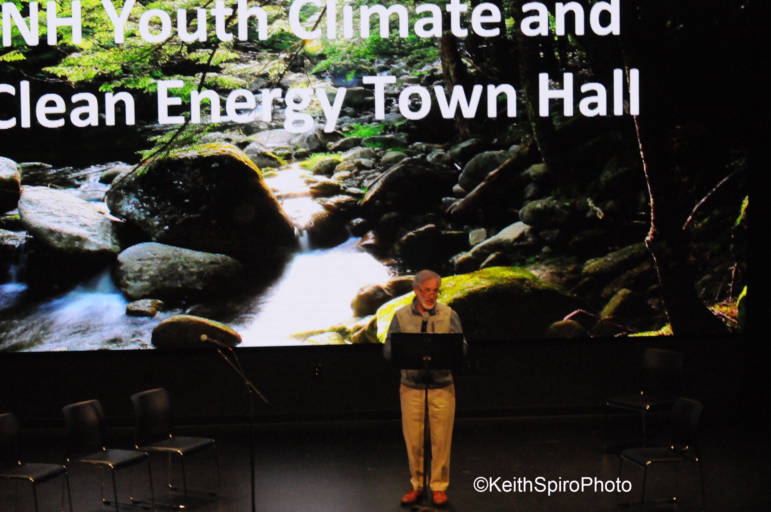 “Listen for solutions that will rebuild scientific policies, be grounded in practicality talking about real dollars from day one and look to those offering solutions with relevance to average folks.  In the end the best way to predict the future is to invent it. ”

Both Klobuchar and Buttigieg used examples showing great leaders make decisions and look through the lens of seven generations into the future. Bill Weld, two-time Massachusetts governor and long-time environmental champion, admonished that talking about dollars in the abstract doesn’t get the job done. There needs to be a price to polluters.

Andrew Yang got pointed questions from Caitlyn Hatzell (Antioch University of New England) wanting solutions for young farmers (they have high suicide rates) and Laura Walk (Dartmouth College) who directly addressed his Carbon Fee.  Yang noted that corporations are, by their very existence, driven to do things for the bottom line. “Put a price on pollution and a price on packaging” and use a carbon fee to reward companies that take creative action otherwise “everything in this country revolves around cost and doing the cheapest thing possible.”

While some might have wanted to dismiss former two-term Massachusetts Governor Deval Patrick’s late start campaign, he offered a different and experienced voice for undecided voters. His collaborative style and results helped turn Massachusetts into the Life Science powerhouse it now is. His strength lies in his ability as a “convener” to bring others with deeper expertise into discussions and action.

Unlike the other speakers at the daylong event, he took notes, he stood when panelists like Ashley Lang (PhD candidate Ecology Dartmouth) stood to ask questions. “It felt like the respectful thing to do,” he said. He matched empathy with actions as an amateur Regenerative Farmer and beekeeper, “there is always a way for better stewardship,” he told Ashley. He matched wit with Kevin Yuan’s (2020 MBA candidate Tuck School Dartmouth) comment on his great “kicks” (that would be “shoes,” if you don’t know the term) as we learned that Kevin is about to join Nike upon graduation but moved eight times before settling in the USA.

Patrick also gave hope noting that “we do innovation well but we stink at transitions. It’s not like we ran out of stone and ended the Stone Age.” His style was inclusionary right down to staying on for an extended meet and greet.

Candidates appearing in person, on stage: Amy Klobuchar, Pete Buttigieg, Bill Weld, Deval Patrick, Andrew Yang and Tom Steyer.  Visible throughout were members of the Union of Concerned Scientists and others concerned with conservation.

About Keith Spiro 52 Articles
Business Strategist, Community Builder with a keen interest in working with high impact startups and other organizations that can make a difference in community and health. Advisor & Contributor Manchester InkLink
Website Instagram Twitter YouTube LinkedIn