MANCHESTER, NH  — According to a listing on Atlantic Retail developer’s site, Starbucks is still a viable option on Elm Street, where an overhaul of the Citizen’s Bank building by project general partner Bill Binnie includes a mix of apartments, retail/commercial space, and a restaurant with outdoor seating.

Although Starbucks is “not firm” yet, according to Sam Koonce, a broker with Atlantic Retail Properties, the property owners look forward to completion of the project, which has great potential for revitalizing the heart of the city’s downtown.

“The owners of the property are in the process of downsizing Citizen’s Bank and moving them to the space shown on the plan. They hope to finish all their interior/storefront construction by July and we hope to have tenants in there and operating by Q4 of this year,” Koonce said.

The project will include outdoor seating in the courtyard out back for any restaurant that buys in, as well as the opportunity for patio seating out front. There is also an exclusive parking garage for tenants, shoppers, and restaurant-goers, Koonce said.

In January, Manchester’s Board of Aldermen approved an application submitted by the project developer for an RSA 79-E tax credit program, which allows developers who improve “blighted properties” in the downtown to delay property tax payment on the value of the improvements.

According to the city’s Economic Director Will Craig, an applicant must meet several requirements to receive the RSA 79-E tax credit, such as the cost of the project must be at lest 15 percent of the assessed property valuation. 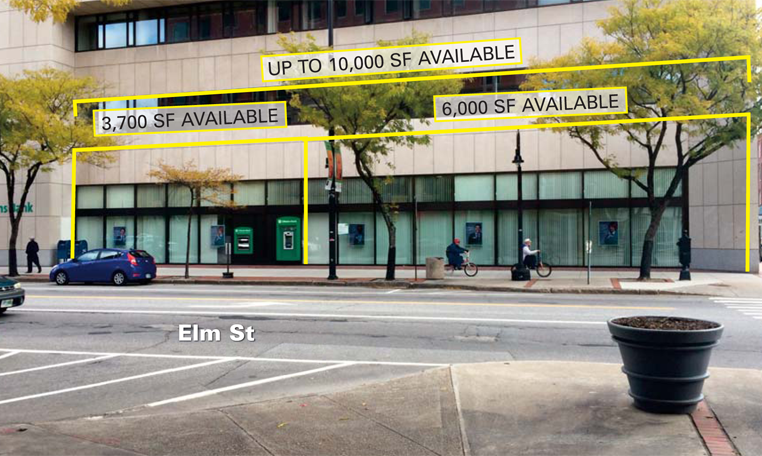 The building, more than a century old, is assessed at $10.2 million, while the proposed renovation is currently $3 million. Binnie paid $8.4 million for the building, and has said he would not seek a tax abatement on the property.

The project is expected to be completed in three years, with apartments being occupied by the end of 2016, according to current estimates. Binnie projects apartment rentals would run $1,100-$1,900.

A spokesperson for Starbucks contacted in January by Manchester Ink Link said the company had no plans for adding a site in Manchester.

⇒The intent of RSA 79-E is to protect public interests and increase benefit:

79-E:7 Public Benefit. – In order to qualify for tax relief under this chapter, the proposed substantial rehabilitation must provide at least one of the public benefits, and the proposed replacement must provide one or more of the public benefits to a greater degree than would a substantial rehabilitation of the same qualifying structure, as follows:
I. It enhances the economic vitality of the downtown;
II. It enhances and improves a structure that is culturally or historically important on a local, regional, state, or national level, either independently or within the context of an historic district, town center, or village center in which the building is located;
II-a. It promotes the preservation and reuse of existing building stock throughout a municipality by the rehabilitation of historic structures, thereby conserving the embodied energy in accordance with energy efficiency guidelines established by the U.S. Secretary of the Interior’s Standards for Rehabilitation.
III. It promotes development of municipal centers, providing for efficiency, safety, and a greater sense of community, consistent with RSA 9-B; or
IV. It increases residential housing in urban or town centers.

Public Documents: Below are links to the paperwork and correspondences between the city and developer, part of the public record.