A month or more before that I was reading another post by a friend on Facebook written in a similar tone: “So sick of feeling depressed. Don’t know why I always feel this way.”  Or something to that effect.

And you know what I did about it? Nothing. Absolutely nothing.

I just signed off and went on with my day.

I didn’t make a call, didn’t send a text, didn’t contemplate the range of our relations. I didn’t even “like” the post because how can you like such soul-crushing observations?

I ignored both posts, not because I’m a total heathen, but because depression scares the shit out of me. I don’t want to talk about it, recognize it, feel the heat coming off the disease, because it seems that once “it” gets under one’s skin, well, you either try to burn it out with pills or tighten the belt all on your own.

I know, because I have been there.

Years ago, I found myself in a mental rut.  I just couldn’t shake my lousy mood, licking the curb of life. Maybe it was late winter. Could have been the dead of summer for all I know.  I just don’t remember. But I was down, and not just hangover humble or mentally beat down by my job or going through a tough stretch in my marriage. I wasn’t.  Quite the contrary.  I have a wonderful family, warm water to bathe in, clean sheets to sleep on, a shit-ton of friends to crawl around town with and about the best (three) jobs in the world; radio, writing and peddling rollators.

Still, I suppose I was going through a “low grade” depression. Sounds clinical, I know. But I didn’t seek out any professional help for my ailment or order up any anxiety medication, either. I have other ways of numbing my senses, if I so choose. In fact, I didn’t reveal my state of mind to anyone — not my wife, my producer, not a single friend, stranger, no one. I just marinated in my own malaise, hoping it would just go away. 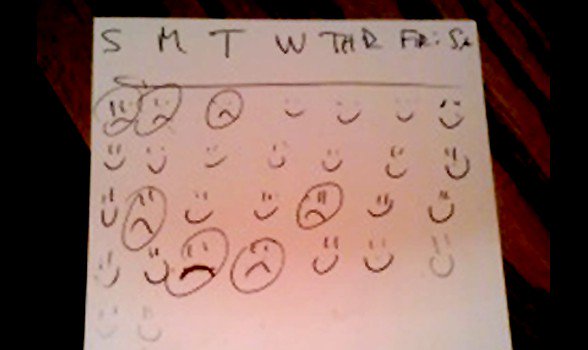 Then, a week and a half after this mental fatigue started, I decided to take matters into my own hands by charting my daily dispositions.

Something wasn’t right with my mind space, and I knew I was heading straight into a full-blown depression if I didn’t work this out. And it paralyzed me with fear.  My dad suffered the disease, my uncle, many friends, co-workers, and now, whether I owned up to it or not, probably me too.

So, for the next 30 days, around eight o’clock at night, after my kids went to bed and my wife started noodling around the house, I took to my desk to contemplate my level of happiness that day.

I was to be honest with myself, that’s what I said. No bullshit.  I was either happy or sad that day, no in-betweens. Then, under that particular day I would put either a happy face or a sad face.  Simple as that.

The first three days scared me — a lot — because there was no change in my senses and I was forced to put sad faces under S, M and T. I rationalized this period, at first, to yet another wild weekend with the fellas and the possibility that my endorphin levels were simply depleted.  So, I hit the gym, the treadmill, the weights to try pull up my levels.  Still, nothing but black shone on my soul. Ugh, I thought, I don’t have the ego (or the biceps) to deal with depression. It goes against my own coda that a shower and a workout is the cure all.

Then, on a Wednesday night, as I sat down to diagnose myself again, I quickly put a smiley face under W.  It was legit, too!  The dark cloud had lifted  and I was filled with promise again, ready to take on the world. Then, over the next week and a half,  I drew a smiley face under THR, then FRI and so on.  This lasted for 12 straight days.

I was out of the woods. Or, so I thought.

Of course, the 13th day of tracking my mood lead to another sad face.  Then two days of happy faces.  Then another sad day. Then four more happy days followed by two straight sad-faced days.

Thankfully, at the very end of my 30 days, I ran off five consecutive days of happiness and I felt content with my condition.  I was manic, yes, but I was also batting .766, having gone 23 days out of 30 feeling happy.

Fucking Hall of Fame numbers!  I had never thought of it that way. I was being greedy.

I also hadn’t thought of my charting experience in some time, not until I read about Anthony Bourdain committing suicide last week, alone in a hotel room in France.  Sometimes those that suffer from depression beat the night, and sometimes the night beats us.  That night, for Mr. Bourdain, tragically, the night beat him.  So, I pulled that now faded piece of white paper out from my desk drawer where I stored it years ago and studied it.

Indeed, it is too late for Mr. Bourdain to chart his days of happiness to see that there were plenty more good days being lived than bad ones. But, it’s certainly not too late for any of us that are either full-blown depressives or just hovering around the bowl of the disease to start averaging out the good and bad days.  We all might not be hitting at the Major League level, day in day out, but at least we’re still in the game, pushing, pushing, pushing our way toward the light.  The light of life.