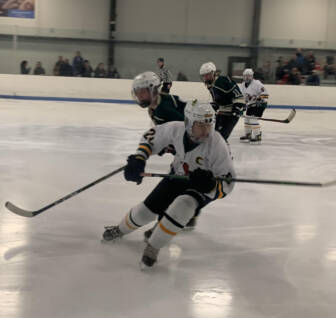 But sometimes that result isn’t what matters.

Defending state champion Bishop Guertin, the No. 2 seed in this year’s tournament, took care of business Friday, dispatching No. 7 Bishop Brady-Trinity (Brinity), 10-2, in a quarterfinal matchup at Cyclones Arena.

It was a gutsy effort by Brinity, which suited up just eight players (a goaltender and seven skaters), to take on a state juggernaut on its own sheet. This meant Coach Dan Early had just two players on his bench at any given moment against a squad that could roll out multiple lines. It’s a situation Early and his team has dealt with throughout the season but one they overcame to upset powerhouse Concord High, 4-3, on the road in January and to knock off Jeene-Mon-Fall Mountain in the opening round of the tournament. 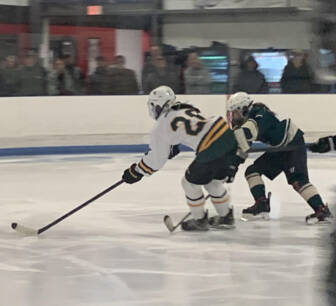 “I didn’t come in here thinking we were going to lose. I thought we had a shot (against Bishop Guertin),” said Early. “Against Concord, we forechecked aggressively. We kept up the pressure and made it hard for them to get out of their own end. We tried to do that tonight but they just have so many talented players.” 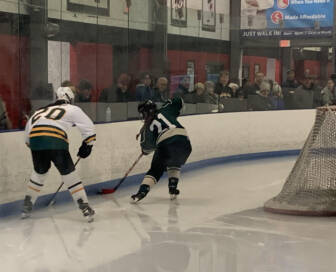 Maggie Berleth had both goals for Brinity, which ends its season at 11-9-0.

Bishop Guertin settled matters early on Friday. The Cardinals scored four times in the first period, including three in a stretch of just 2:01. Lynch had two of the goals in the period and assisted on one by McGloughlin.

Brinity answered with an unassisted goal by Berleth at the start of the second period, cutting the BG lead to 4-1. Brinity tried to build on the momentum but Bishop Guertin would not be pressured into a mistake. Instead, the Cardinals kept working to wear down the out-manned visitors and broke the game open with three more goals.

Gracie Menicci scored off a feed from Riley Goldswaite to make it 5-1. Later, McGloughlin notched her second  and Lynch completed her hat trick to give the Cardinals a comfortable 7-1 edge after two periods.

Bishop Guertin kept up the pressure in the third period, not wanting Brinity to even contemplate a comeback. Lynch’s fourth, came when a loose puck was kicked across the crease and onto her stick. All she had to do was flipped the puck past Brinity goalie Kacey Yorston (27 saves). Just 20 seconds later, Shattuck netted her second to make it 9-1.

Still, Brinity kept attacking and it paid off on Berleth’s second goal of the game, which came 3:24 to play. Taking a lead pass from Finley Hollenberg and made a strong rush down the left side, used her body to shied the puck from the defenseman as she cut in front of the net, then flipped a nifty backhand past Cardinals goalie Makenna Reekie. 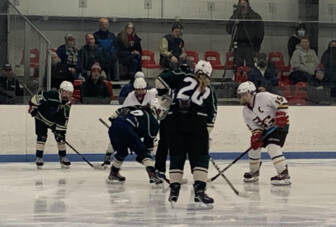