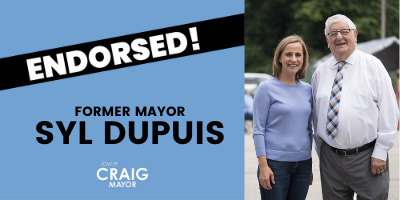 “I am enthusiastically endorsing Mayor Joyce Craig for re-election,” said former Mayor Syl Dupuis. “Her strong leadership of Manchester comes from her deep commitment to our community. Under Mayor Craig’s tenure, I’ve seen so much positive economic growth in our city, support of our school district, and a hands-on approach to tackling issues of public safety. With so much opportunity for the Queen City in the next two years, Joyce is the right person to continue the job.”

“I am thankful to earn the support of Mayor Dupuis, a long time leader and champion for Manchester,” said Mayor Joyce Craig. “I admire Syl for his commitment to public service and his passion for the City of Manchester. He is a man of integrity, wisdom and strength, and he builds consensus wherever he goes. I am grateful for his support.”

Sylvio Dupuis served the city from 1972 to 1975 as mayor and has dedicated his time as a community leader, volunteer, and philanthropist. Along with acting as Mayor of Manchester, Dupuis served as president of the Catholic Medical Center, Commissioner of the New Hampshire Insurance Department, and Commissioner of the New Hampshire Department of Health and Human Services.  He lives in Manchester with his wife Cecile.