MANCHESTER, NH – Police are investigating another attempted armed robbery, the second in three days as the Shop-N-Go, 188 Massabesic Street.

At 7:25 a.m. on Jan. 8 a man entered the store and, holding a mini-gun and a sledgehammer over his shoulder, demanded cash from the clerk.

The 24-year-old clerk refused to give the would-be robber money, so the man fled the store in an unknown direction on foot without any cash. The male clerk was not injured in the incident.

If you recognize the clothing pictured in these surveillance photos, or know the person responsible for this robbery, please contact the Manchester Police Department at 603-668-8711 and reference MPD Case # 19-335.

The robber was last seen wearing a gray hooded sweatshirt with black designs on the shoulders, blue Levi’s jeans and black sneakers. He is described as a black or Hispanic male, approximately 5-foot-5 to 5-foot-8 inches tall, and approximately 140-160 pounds. 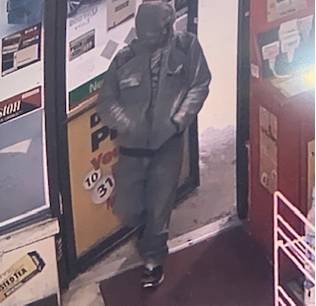 You may also leave your anonymous crime tip with Manchester Crimeline at 624-4040. You may be eligible for a cash reward should your crime tip lead to the arrest and conviction of the person responsible for the robbery. There are no further descriptions at this time.

This is the fifth armed robbery or attempted armed robbery at a convenience store as reported by Manchester police since Dec. 28.