If you don’t want to get towed, read on.

After two towing emergencies so far this year, the city has towed twice as many cars, on average, as last winter – 185 per event this year, compared to 97 per event for the 2014-2015 season.

During a citywide snow emergency, all cars are to be moved off all city streets. To inform residents, a strobe light flashes atop traffic lights at major intersections, and text messages are sent to those who subscribe to the city for alert. A notice is also posted on the city website.

Resident Julie Senneville says she noticed some unequal distribution of tow trucks during the last storm, which left many cars parked and piled with snow where city plows went around them.

It also raised some questions in her mind.

“The night of the storm the police were lining up plow trucks on Grove Street so that at 10 past 10 p.m. the cars start getting towed. I reached out to someone about it, who said they tow from areas where they can’t get fire trucks through, and that’s a valid concern,” says Senneville.

“But I live in the semi-North End, toward Sagamore and Blodgett, and noticed as I was leaving the city that there were cars piled with snow on Chestnut, and places on Blodgett, even this morning, where cars had been parked when they shouldn’t have been. Obviously those cars didn’t get towed,” says Senneville, who provided a few photos she took Monday morning.

Senneville says even though she’s not typically a huge advocate of social justice issues, she couldn’t help but notice that there is a disparity when it comes to towing in the city.

“I do like a level playing field, so I have to wonder why aren’t we up here towing in the more affluent areas as well? I’m just wondering if the city is doing enough to educate people in certain areas of the city where there is more regular towing. I know I can’t afford to get my car out of impound at $110 cash. I wonder if we are getting the word out, to make sure people concentrated neighborhoods that are poor or where newer residents live, know their options. I want to make sure everyone is being treated fairly and equitably,” Senneville says.

Winter parking bans magnify what Senneville sees as a persistent citywide parking problem, in general, but particularly during snow emergencies. She wonders why JFK ice arena or Market Basket on Elm Street can’t be designated as alternative parking areas, and why there is no designated “safe place” to park on the city’s West Side, given there are parking garages available on the East Side of the river.

UNH grad Mike Pelletier raised similar questions last summer. He spent months crunching the numbers and learned a lot about the city’s snow emergency practices, which resulted in a 40-page report submitted to the city.

His takeaway was that we tow more cars every winter compared to other cities, both here and in cities of similar size and demographics in neighboring states. Consistently, those being towed during snow emergencies are on average, new residents under age 30 and of comparatively lower income.

“My study was the only time I know of that someone has gone to the impound lot and surveyed who was being towed. I went last year during the last eight snow emergencies, and interviewed 15 percent of 837 people towed for a total of 133 people,” Pelletier says.

“Two of the aldermen I spoke with said they want Manchester to be a destination city where people live, work, play, and get educated in. Yet, if you look at Annex B, almost 60 percent of those I spoke to were under age 30. And 57 percent had lived in Manchester under two years – a third of those, less than a year, and a third  were earning less than $25,000 a year,” Pelletier says.

Over the summer Public Works Director Kevin Shepard admitted that it’s hard to get the entire city on board and off the streets in advance of a snow emergency.

“Could we do better? I’m sure we could. There’s only so much you can do to increase awareness. I don’t believe there will ever be a time we won’t find a vehicle parked illegally during a snow emergency,” Shepard said.

Notices are printed in English and Spanish and distributed in stores around the city, Shepard said. “Believe me, it’s something we continually try to work on. You do have people who’ve moved in since last winter, so we try to use car registration as a tool to inform people about the process.”

As for Pelletier’s report, Shepard said he wasn’t sure if enough data was gathered for him to draw some of the conclusions he came to.

“I don’t doubt some of those conclusions are correct. When you look at Manchester, we do have a lot of vehicles and a large urban core.  The urban core is where a lot of the vehicles are towed from,” Shepard said.

Another observation from Shepard was that while notices go out with city tax bills, those are sent to landlords and property owners, and so there’s no way to know whether that information is being passed along to tenants.

“Last year’s average was 97 cars towed per event.  For this year, they have towed an average of 185 per event [192 for the first snow emergency + 178 for the second.] The highest number towed for any event last season was 160,” said Pelletier.

Although he says objectivity is a key part of the research process, it looks like the city has not employed any new tactics to reduce the number of cars towed. [See his full report below.]

“Just looking at the numbers it appears that if there were any mitigation techniques being employed, the numbers show the city is towing more volume of individuals than in the past – almost twice as many on average than last year,” Pelletier says.

In his capstone project for the University of New Hampshire Masters of Public Administration course, completed in 2015, Pelletier looked at the who, where and why – who was being towed from where and the various reasons why. 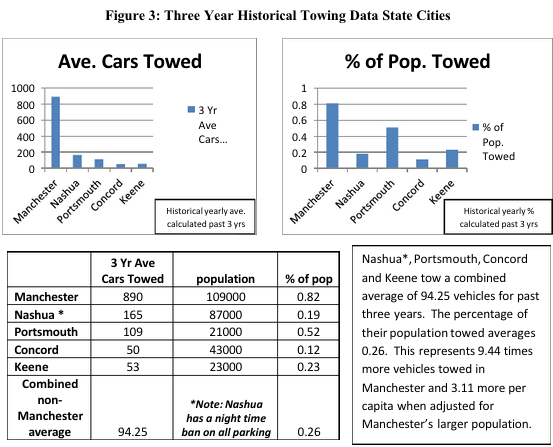 In the process of information gathering, Pelletier surveyed five of the six tow companies contracted by the city to ask why they thought such large numbers of people were getting cars towed during snow emergencies (one of the six companies declined to answer).

The general consensus was that people can’t find off-street parking and don’t fully understand the concept of a snow emergency and how it will affect them.  Pelletier found it surprising that two of the five companies didn’t want to take part in towing since it was not profitable for them based on the amount of time and resources needed to do the towing. [See an excerpt from Pelletier’s report below.]

Pelletier’s remarks: “The problem they mentioned was that they needed to complete complex coordination of their drivers and equipment to be available from 10 p.m. to 6 a.m. And, since they must participate to be licensed in the city annually, the drivers must be confirmed to participate and obligated to show up. If a towing company does not deliver the directed number of vehicles and drivers then they are in violation of the city contract and could be terminated from doing business in the city. The number of vehicles towed to ‘break even’ in their finances is not a guaranteed number so they take a risk of losing money.” [See Annex A for details.]

He also noted in Annex A  of his report that for the city to “break even” it must tow an average of 102 vehicles per towing event.

Pelletier did not draw conclusions, but did recommend that the city’s Mayor and Board of Aldermen appoint a study committee to work on policies to reduce the number of vehicles towed annually – which Pelletier concludes has a negative impact on the community.

“These are the people who live, work, visit, get educated and play in the city where they have now had their vehicle towed to the east side of Manchester to an outdoor impound lot. They must go through the inconvenience in recovering their vehicles which includes: realizing they have been towed, finding out where their vehicle is located and what it will cost to get it back, finding a ride to the bank to obtain the $110 cash needed if they don’t have it on hand, finding a ride to the impound lot and then paying the fee. It is estimated this unscheduled process can take approximately 45 to 75 minutes for the hundreds that are towed every year. Businesses in the area of the towed vehicles are also affected by the Snow Emergency process. Since the towing starts at 10 p.m., any business that relies on customers past that time will have their customers who depend on parking on the street not show up, or leave early,” wrote Pelletier in his report.

He also concluded that the towing practices negatively affect landlords who rent in areas of the city where there is no off-street parking.

“These businesses will have their renters or customers negatively affected by being towed and thus potentially decrease the value of their product, which is rental units. There was anger witnessed by some of the towed renters that their landlords are not informing them and sometimes ‘misinforming’ them about this topic,” Pelletier wrote.

On Monday Pelletier said he’s more than happy to break down the results of his survey for anyone who wants more information. So far no one from the city has asked him to make a presentation, although he was present the night the Board of Alderman changed the even/odd nightly parking to even/odd monthly parking.

“That wasn’t something I addressed in my report, but I was there that night. I was asked to be there in case there were questions about my report, but it never came up,” Pelletier said.

“And if the city wanted a report on the effectiveness of the new even/odd winter parking regulations, there are more than enough students at UNH who would be happy to help out,” he said. “I didn’t see any data for them to base the decision on when they changed the process this year, but I guess not having data hasn’t stopped them in the past.”

[Read Pelletier’s complete report, “Manchester Snow Emergencies: Who is Being Towed from Where and Why,” below.]

⇒Click here for everything you need to know about winter parking

If you have any concerns about plow damage to property or mailboxes, contact Public Works.