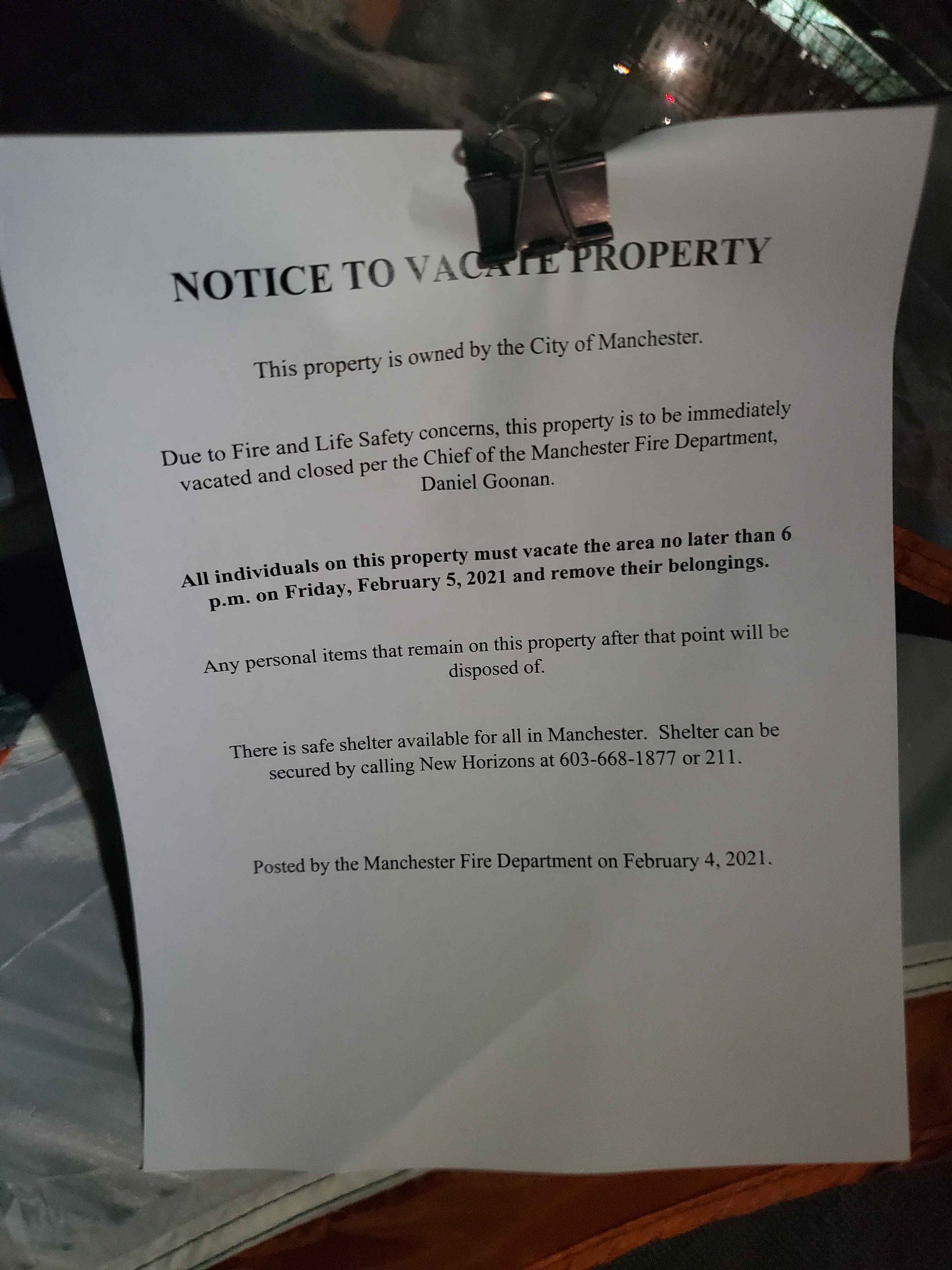 MANCHESTER, NH – A day after a fire destroyed a makeshift tent at a homeless encampment near the Amoskeag Bridge, the fire department posted a notice ordering everyone to leave due to “fire and life safety concerns.”

No one was injured in Wednesday’s fire at the encampment located under the bridge near Canal Street, across from the New Hampshire National Guard Armory.

Those who make the encampment their home – currently about 20 people – have until 6 p.m. Friday, February 5, 2021, to leave.  Although the posted notice said any unwanted personal property left behind would be disposed of, Fire Chief Dan Goonan said personal items that need to be temporarily stored will not be thrown away.

“We’re not doing what state did at the courthouse. We’re not cutting up tents or throwing anything away,” Goonan said. They are working with city Public Works Director Kevin Sheppard on a storage plan through the city’s highway department.

It comes down to a matter of safety, Goonan said. Wednesday’s fire was called in via 911 at 10:20 p.m. The tent was fully involved when firefighters arrived and extinguished it. Miraculously, no one was hurt or killed.

“The thing that made my mind up is that we have about 20 people down there, and in investigating that fire,  in that camp alone there were something like 10 propane tanks – and all the other camps are similar. There are good-meaning people dropping off propane tanks to help keep people warm, but they’re pretty dangerous,” Goonan said. “We’ve had significant fires at encampments – not just the one on Wednesday, but others, as well as that tragic fire in December in which that poor fellow died.”

Goonan said Wednesday’s fire could have easily taken out the bridge or taken more lives.

“I’m worried about the wellbeing of occupants of that camp, trying to get people into the shelter. We’ve reduced the number who are unsheltered by a pretty good amount and trying to get people connected to services,” Goonan said.  Most of those who remain are the ones with the most persistent mental health of substance use issues, he said.

“I know I will be criticized either way, but I don’t want to relive what we went through in December with a fatality,” he said, referring to the Dec. 5, 2020, fire that claimed the life of Gary Silver, 64, who died inside a tent that caught fire at a homeless camp behind 168 Willow St.  A 911 call was made about 1 p.m. that day after an explosion.  When firefighters arrived, the tent was fully involved in flames.  Silver died as a result of smoke inhalation, authorities said.

Goonan says there has been daily contact by the city’s outreach team to those living in tents, informing them that there are enough shelter beds open right now to keep people safe and warm, and beds can be found by calling Families in Transition/New Horizons at 603-722-1250 or 211. City Welfare is also involved with connecting people to services.

At the height of the pandemic the city’s outreach team was visiting more than 30 encampments, and had counted as many as 500 individuals living unhoused. That number has decreased significantly – to about 120 individuals, Goonan estimated – with the change of season and the transient nature of that population. Some have gone to the shelter, others into drug treatment or mental health care programs. Many have moved on.

Thursday was a  long day of deliberation among city entities over how best to proceed, Goonan said. Much consideration over the legal ramifications of posting at the homeless encampment, and the practical implications of making sure each individual is provided the information needed and opportunity to move into a safer sheltered situation, was discussed at length.

He said he is constantly looking through fire codes to determine what’s legal, or whose rights they may be impinging on with every decision.

“In the end I have to act with common sense. If some attorney or judge says we erred, we’ll have to deal with that, but we already had a fire death and other fires over last month, and I will take action and try to protect the neighborhood and those in the encampments. This is the best way to do that,” Goonan said.

“I have a lot of heartburn with people staying down there. But in going there every day, in seeing who this population is and what their particular issues are, medically and psychologically, knowing that with all that propane down there that what happened Wednesday could easily happen again, I had to make a decision – and it is a tough decision. Those who remain unsheltered have their reasons, but we also know that many of them aren’t in a state of mind to be making the best decisions for their own safety,” Goonan said.

Families in Transition spokesman Kyle Chumas said capacity at the Manchester Street shelter is at 110 beds, and that right now they have about 50 open beds across the city at several different locations, including emergency beds. They have been working closely with police, fire and mental health to make sure those individuals in need can be helped.

Goonan noted that the power of social media has activated the community to help. Following Wednesday’s fire there was an outpouring of items dropped off near the camp.

“Sometimes you’re taken aback by the power of social media. There are so many people in our community who care. Just while I was there at the campsite yesterday,  a half-dozen cars showed up dropping stuff off, whether food or toiletries. Right now we’re trying to coordinate everything thru FIT/New Horizons. They are the biggest player in this, so I would tell anyone who wants to help that the best thing to do is to coordinate through them,” Goonan said.

He is also preparing to hire a Director of Homeless Services for the city, who will act as a liaison between organizations locally and at the state level with a focus on housing and mental health services. That hire should be finalized within the next week, Goonan said.

“We’re down to four finalists, and what we’re looking for is someone who can hit the ground running, take the lead, communicate with the Board of Aldermen and coordinate efforts – someone who is not the fire chief,” Goonan said.

“I’ve been criticized for my role with the homeless and those dealing with substance use, but it has risen to the level of emergency, and I stepped up. I’m no expert, but I am tasked with public safety and what I’ve learned through my experiences is that we can’t forget about the humanity of these people,” Goonan said.  “Some of these people are terribly ill, physically and mentally. Some of these people suffer from developmental issues, or severe autism. They’re separated from family. They have no one who cares for them or who can help them. The least we can do is keep them safe and try to get them the help they need.”

On Friday afternoon Families in Transition/New Horizons posted the following update on Facebook:

Our on-going response in support of our community members living unsheltered in Manchester:
The Families in Transition Outreach team is working directly with unsheltered individuals from all encampments throughout the city who need a safe place to find shelter and locate stable housing opportunities alongside our partners at other outreach providers.
Beds are currently available at our adult emergency shelter. Bed numbers are fluid on any given night based on utilization and the need for social distancing and COVID safety measures. After check-in last night, there were upwards of 45 beds available for individuals experiencing homelessness.
FOR PEOPLE SEEKING SHELTER:
If you are experiencing homelessness, you can call (603) 722-1250 or check-in at 199 Manchester Street in Manchester during check-in hours.

Additional reporting for this story by Carol Robidoux.