MANCHESTER, NH – The city has announced a new free mobile app, Manchester NH Connect, now available for use by residents.

The app was announced during the Oct. 7 meeting of the Board of Mayor and Aldermen by Manchester Economic Development Director Will Craig.

“After several months of planning and coordination with various city departments and integration testing with city systems, I am pleased to announce that our new mobile app, Manchester NH Connect, will improve the delivery of City services, increase government accountability, and make City Hall more accessible to the residents of Manchester,” said Craig.

This official city app is free and available for download in the app store on iTunes for iPhones and Google Play for android phones.

Manchester, NH Connect encourages citizen engagement by allowing anyone to report a problem directly from their mobile device. 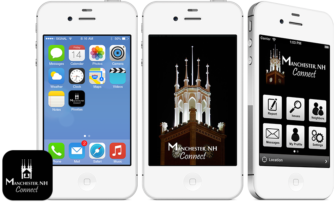 From potholes, to street light outages and more, a report can be made by simply snapping a picture and pressing send. An issue ticket is created and then routed to the appropriate city department for corrective action.

Manchester Mayor Ted Gatsas, who spearheaded the city’s initiative to develop an app and announced in his inaugural address in January, applauded the commencement of this phase of development.

“This app is a must-have for city residents, visitors and professionals. From the convenience of your mobile device, you can access all aspects of city government from contacting the Mayor and your local Alderman, to locating various athletic opportunities available to children, to finding out what exhibitions are featured at the Currier Museum of Art and purchasing tickets. Where technology is certainly a large and essential part of our everyday activities this is great news for the City of Manchester,”  said Gatsas in a prepared announcement.

The next phase of the app development will include the addition of the Manchester School District while new features will be continually added to Manchester, NH Connect.

“It is our hope that Manchester NH Connect will continue to grow and that we can further increase access to city government and the Queen City community,” Craig said.