MANCHESTER, NH – Jordan Moura was thrown out of Cheers & Beers bar on Elm Street Saturday night but, a prosecutor said, he forced his way back inside and shot a 29-year-old man, the brother of a woman he had insulted.

Police said the victim got into a fight with Moura who crudely told his sister, “I’m gonna f–k the sh-t out of you.” 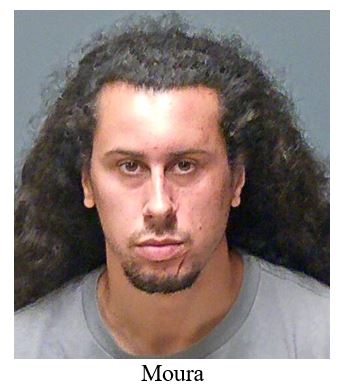 Judge Amy Messer ordered him held in preventive detention saying the state had proved by clear and convincing evidence that his release would endanger the safety of himself or the public.

The shooting happened just before midnight Saturday inside the 1055 Elm St. club.  Officers patrolling the area were flagged down outside the club concerning a man who had been shot.  They found “J.C.” suffering from a “through and through” gunshot wound to his lower left abdomen and immediately began to treat him.  He was taken by ambulance to the Elliot Hospital for further treatment.

According to court documents, Officer Brendan Newell rode in the ambulance with him.  J.C. told the officer he was at a VIP table with family and friends in the bar when a man he’d never seen before approached the group and began gesturing towards his sister, “S.C.”  He took exception to the gesture and exchanged words with the man who struck him in the side/back of his head.  J.C. said he grabbed a bottle and swung it at the man, but was unsure whether or not he hit him as a bouncer attempt to remove the man from the bar.

J.C. told police the man then pulled a black handgun from his waistband and fired one shot at J.C., hitting him in the lower abdomen.

Officers also spoke to his sister.  She said Moura was standing beside the VIP table and started to flirt with her before telling her, “I’m gonna f-ck the sh-t out of you,” which her brother overheard.  JC told the man to leave and the man pushed J.C. backward.  She said the man then pulled out a black firearm and fired one round toward her but missed, then fired another round at J.C. , striking him, before finally firing a third round into the ceiling.

Another witness, who was outside the front door of the club, said he saw a man exit the bar with blood running down his face from the nose down.  He said the man came outside, muttered something and then went back inside the bar.  He said he saw the man shoot J.C. before fleeing the scene.  The witness said he recognized the man because he was a frequent customer at 603 Bar and Grill/Penuche’s where the witness used to work. The witness showed the officers a Facebook page for “Anthony Jordan,” the alleged shooter.

Later, a  passerby approached an officer to say they observed an article of clothing which was covered in blood in the Hanover Street/Nutfield Lane area.  Police recovered a blood-stained blue and white striped shirt in that area.

A screenshot of the “Anthony Jordan” Facebook page was distributed to officers and soon after an officer identified the man as Moura, who he had “Field Carded” in August.  According to court documents, at that time Moura was riding a bicycle and was found to be in possession of a loaded Beretta APX (9mm) handgun which was tucked in his waistband.

Police reviewed a video recorded by Cheers and Beers of the shooting.  The recording begins at 11:39 p.m. when Moura walks from the back of the bar to the front and stands alongside the VIP area where J.C. and his sister are located.  Four minutes later, Moura and J.C. exchange words and Moura pushes J.C. with his right hand in the face/neck.  J.C. swings an unknown object at Moura, hitting him in the head/face before Moura is pushed out of the front of the bar by security and bystanders.

A minute later, Moura pushes his way back into the bar, pulls a handgun from his waistband and fires one shot at J.C. before fleeing the bar, according to court documents.  J.C. is seen limping and bleeding from the lower left abdomen/hip area before bystanders begin assisting him.

Police said the shirt Moura is wearing is a match to the one recovered.

Police located Moura two days later.  When searched, police found a receipt from Wildlife Sports Outfitters, 2188 Candia Road, indicating he sold a Diamond Back DB9 9mm handgun to them for $200, on Sept. 26, after the shooting.  He also was in possession of a check made out to him for $200 from the same store.

Moura, when interviewed by detectives, said he did in fact shoot the victim and that he had sold the gun.

Police later learned that prior to selling the gun to Wildlife Sport Outfitters, he attempted to sell it to Manchester Firing Line.  Staff there said Moura came into the shooting range on Sept. 26 and said he “wanted to get rid of the gun.”  He was offered $50 but refused to sell for that low amount.

Public Defender Julian Jefferson asked the court to release Moura on personal recognizance bail to house arrest.  He noted Moura’s criminal history consisted of convictions for misdemeanor offenses.  He also said there was a discrepancy concerning how many shots were fired, with police saying a video recording showed one shot was fired while a witness  reported three shots.

Assistant Hillsborough County Attorney Matthew Cessna said it doesn’t matter if there were one, two or three shots fired.  Moura, he said, was the one who was removed from the bar but pushed his way back inside and began shooting.

Whether there was one, two or three shots fired, Cessna said, “he’s a danger to the community and should be held.”

The judge ordered Moura preventatively detained but said the defense could file a motion requesting an evidentiary hearing if “after review of the surveillance video, the accuracy of the state’s offer of proof regarding defendant’s reentry in the location of the shooting is genuinely in dispute.”

On Sept. 27 police said as part of the ongoing investigation and response to this incident, the New Hampshire Liquor Commission, Department of Enforcement has issued an emergency suspension of Cheers and Beers liquor license for a period of 10 days pending a hearing with the board of licensure.  This suspension will allow for a review of business practices and filing of any violations of licensure.