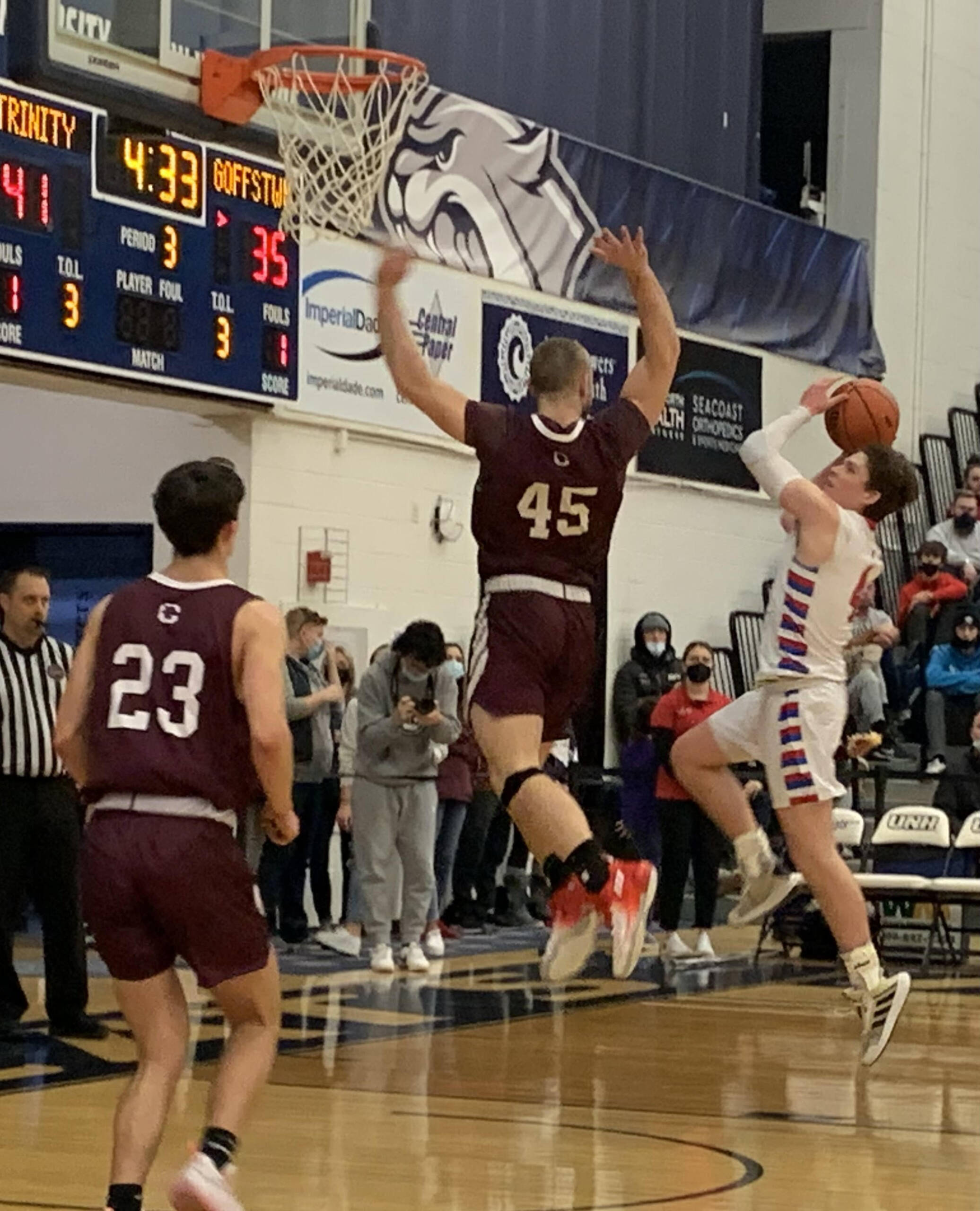 DURHAM, NH — Trinity sophomore Tyler Bike saw his opponent’s eyes. He saw the pass, the ball and the open floor.

Then he saw his dad., Pioneers’ Head Coach Keith Bike. And in that moment, both knew something very special was happening.

Tyler Bike stole a pass from Goffstown point guard Robenson Baguidy with :06 seconds left, then dribbled out the clock to clinch the Division 1 State Championship for the Pioneers, 64-62, over Goffstown High, before close to 2,000 fans at the Lundholm Field House on the campus of the University of New Hampshire.

“It was nice. I got the steal and I look up and I could see him tearing up and I thought, ‘oh, man, this is about to be waterworks,'” said Tyler, who hit his first seven shots and finished with a team-high 23 points, to go with four assists and two steals. 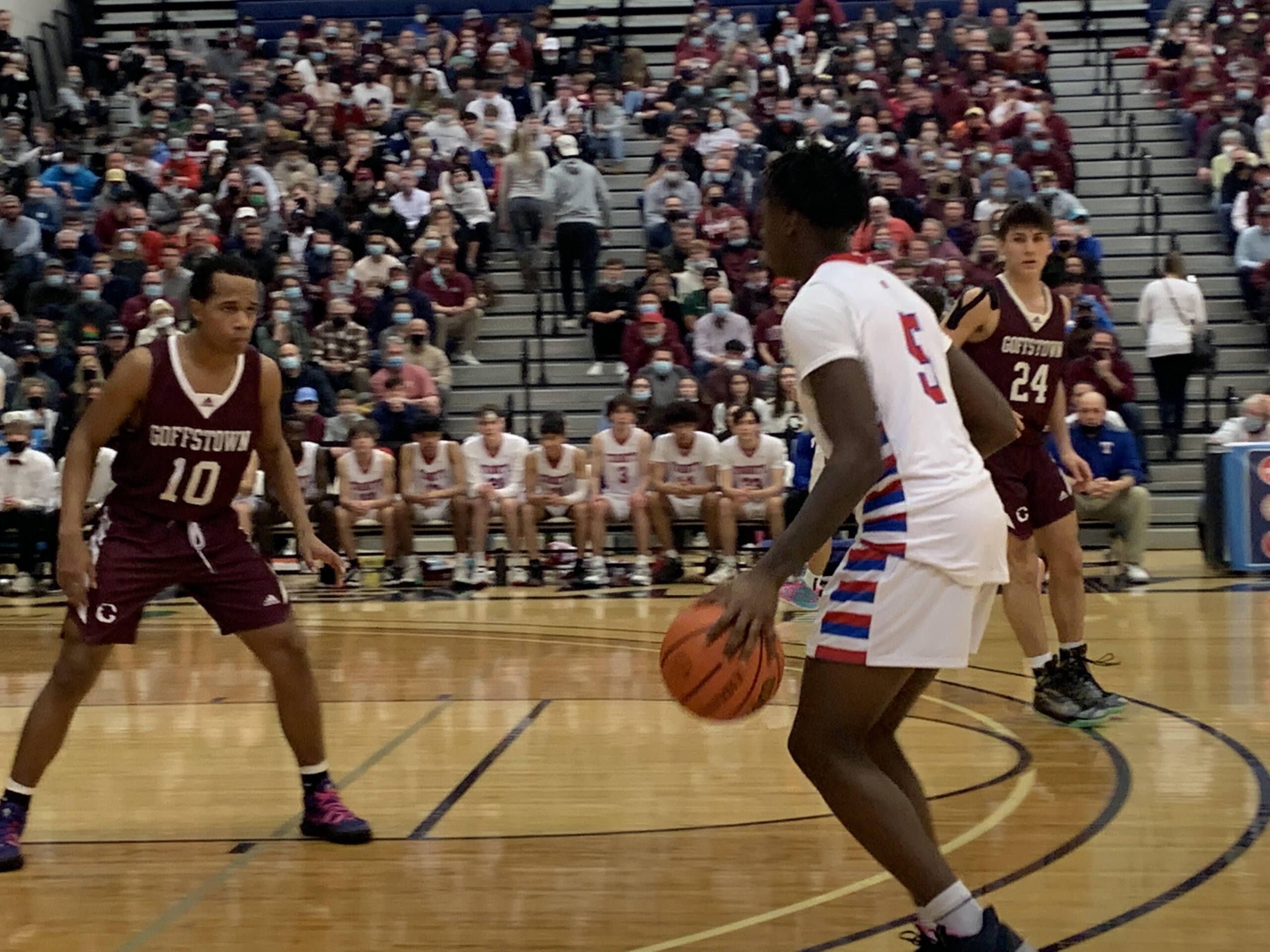 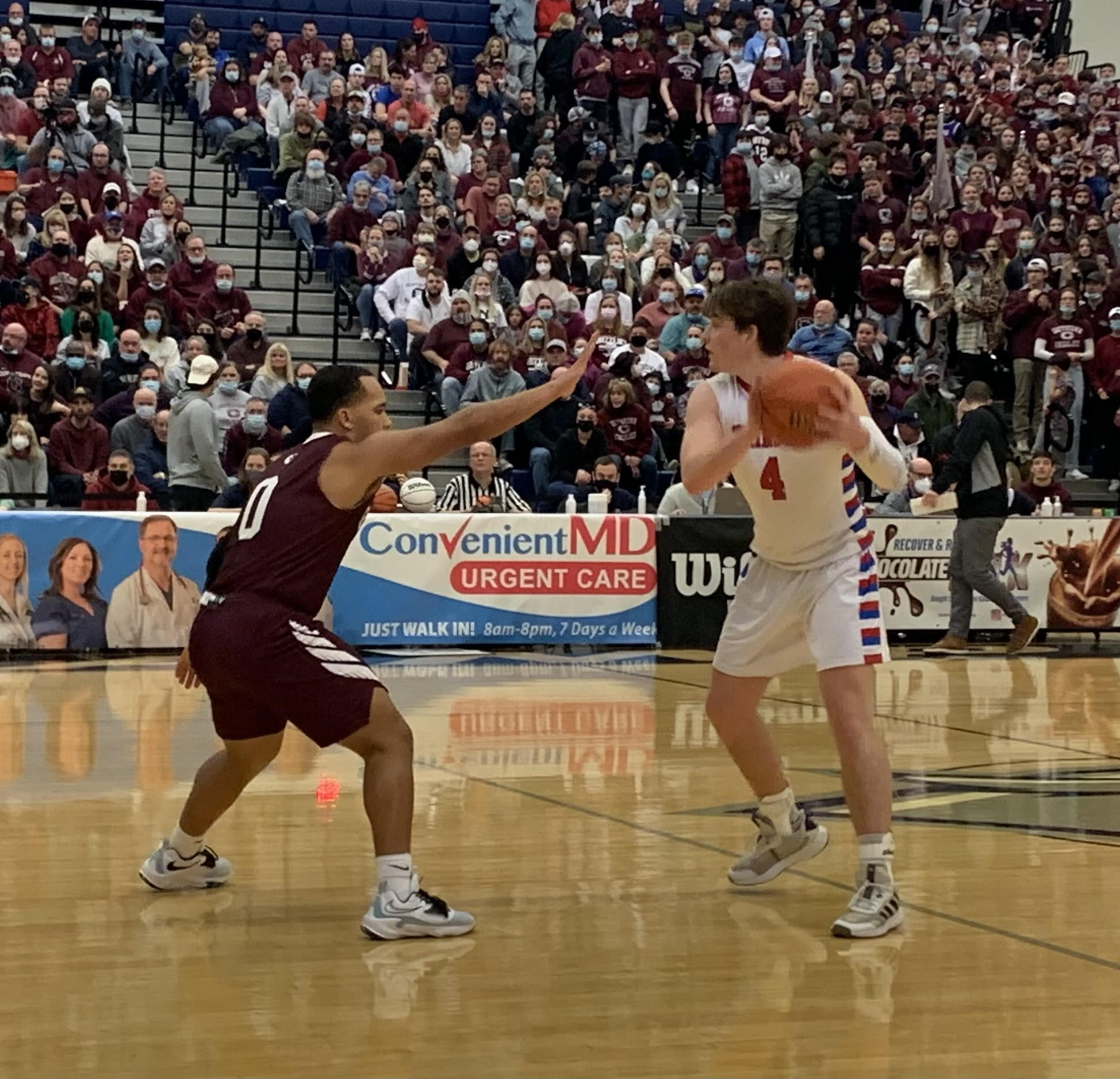 The state championship was the first for Trinity since 2013, and the first for Keith Bike as head coach, made extra special by being able to share it with his son.

“It’s great, it’s a memory I’ll never forget,” said Bike. “I never had the chance (to play for my father), my father was a great coach but he refused to coach me, even when his assistant coach (at Sacred Heart) was recruiting me coming out of high school without his even knowing. So this is just a great memory.”

For Keith Bike, his players and coaching staff, the victory marked the conclusion of a dream season, that began with a huge home win over crosstown rival Manchester Central and included a championship in the Queen City Holiday Tournament. The Division 1 State title was the icing on a very tasty cake. 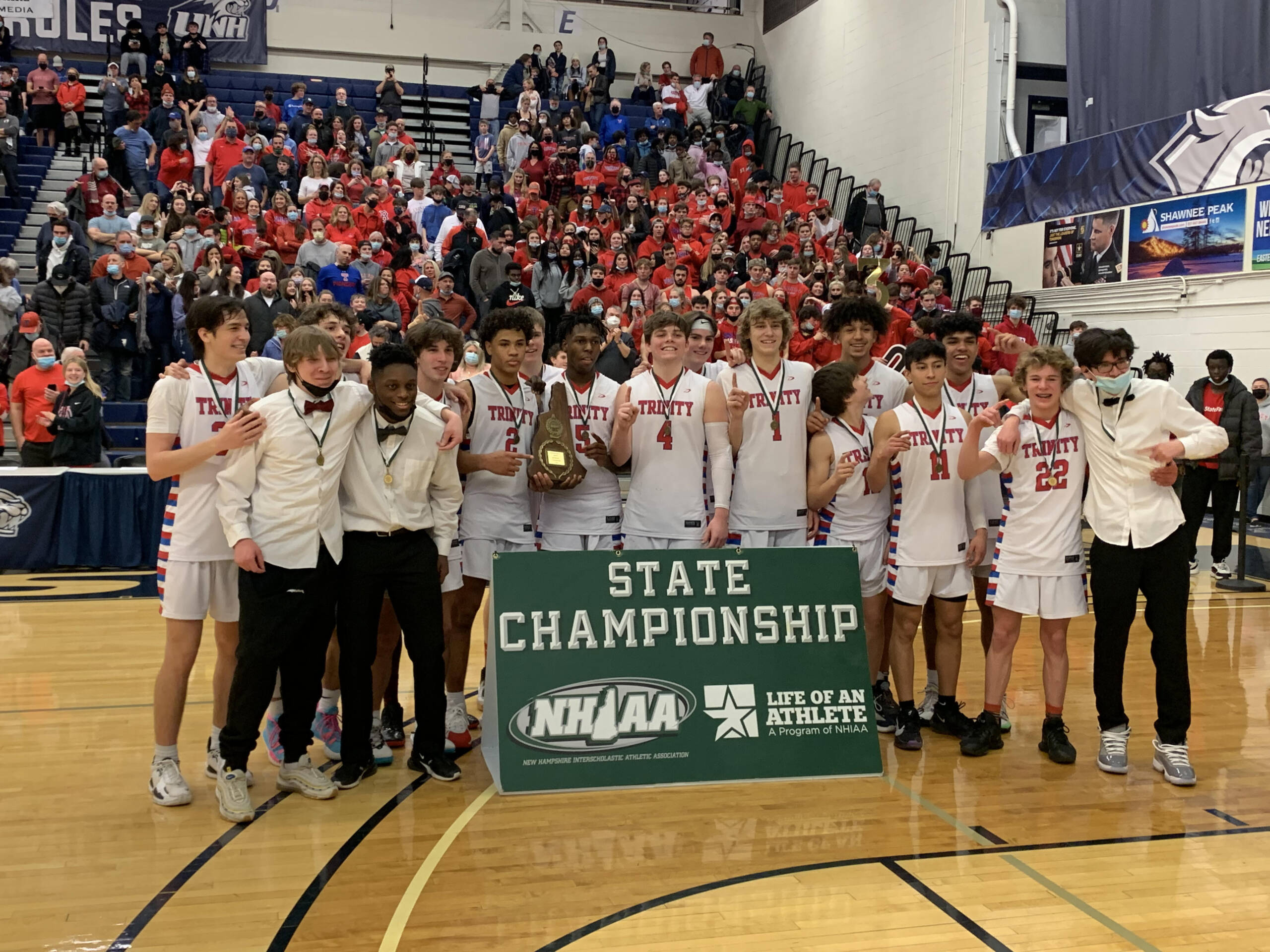 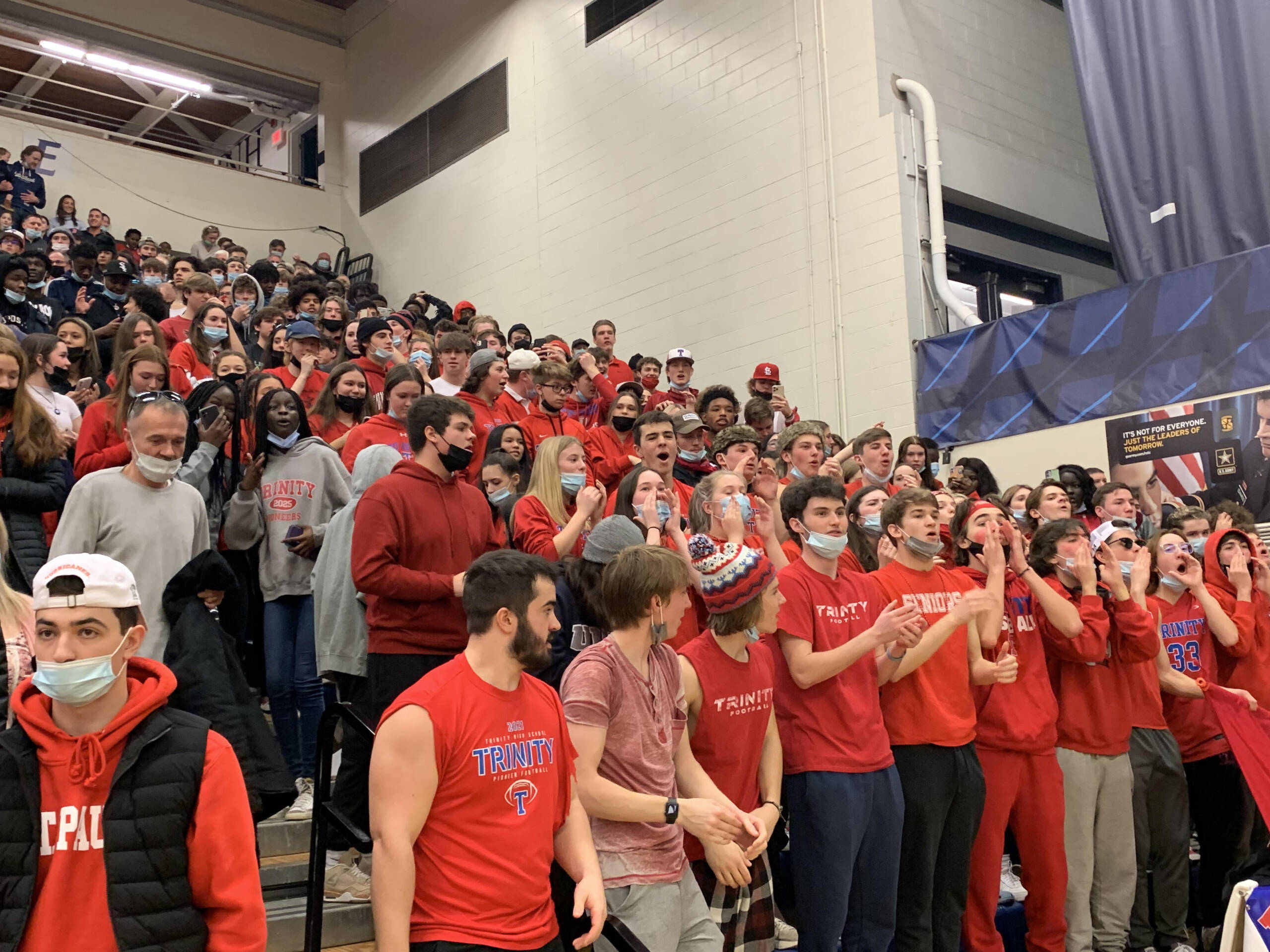 The Pioneers got another strong game from sophomore Mark Nyomah, who had 12 points, eight rebounds and a blocked shot, despite playing much of the game in foul trouble. Senior Andrew Politi left it all on the floor in his final high school game. Politi played all 32 minutes, finishing with 12 points, five rebounds and three of Trinity’s nine steals.

“This is great. It’s the best feeling in the world,” said Politi. “All the hard work we put in finally paid off.”

Goffstown carried a 50-46 lead into the fourth quarter and looked ready to tighten its grip on the game and the championship. Instead, as it has all season, Trinity found a way to ramp up its defense and make the other team pay for its mistakes. 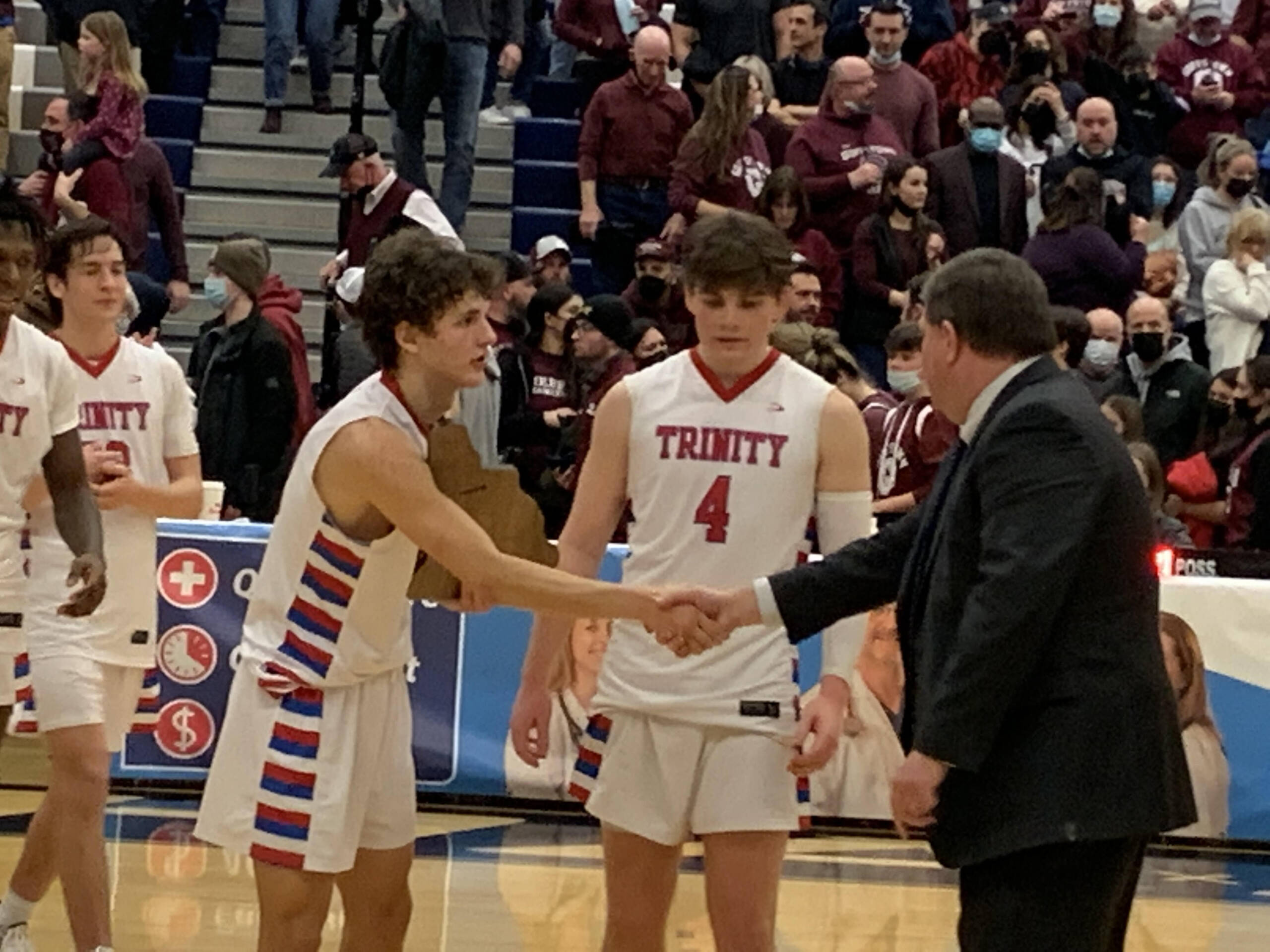 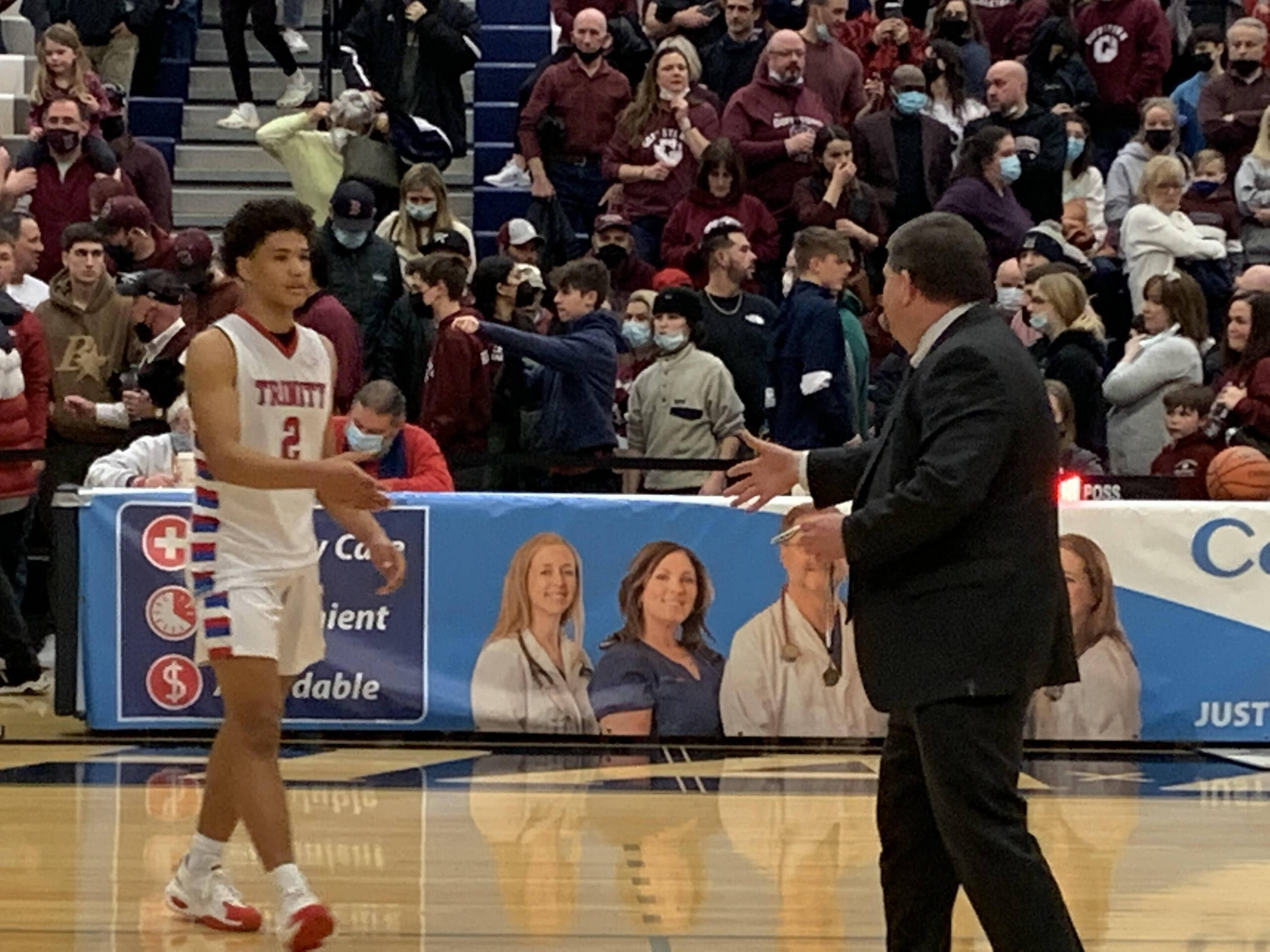 A 3-pointer by Trinity’s DeVohn Ellis cut the deficit to 50-49 with 4:55 to play. On the ensuing possession, a steal led to Tyler Bike getting sent away on a fastbreak. Bike was fouled hard by Gofftown’s Jonah Lopez. Seconds later, during the stoppage in play, Grizzlies’ center Peyton Strickland bumped Bike shoulder-to-shoulder, hard enough to knock the Trinity guard to the ground. Strickland was hit with a technical foul.

As a result, Bike went to the line for four free throws — two for the shooting foul and two for the technical. Bike drained all four to give Trinity a 53-50 lead with 4:29 left. Momentum swung completely to the Pioneers’ side and they weren’t about to let go.

Gofftown’s Aiden O’Connell did everything he could to keep his team in the game. O’Connell, who finished with a team-high 23 points, drilled a 3-pointer from the wing, then converted an old-fashioned three-point play on a baseline drive to pull the Grizzlies to within 62-60 with 1:11 remaining. 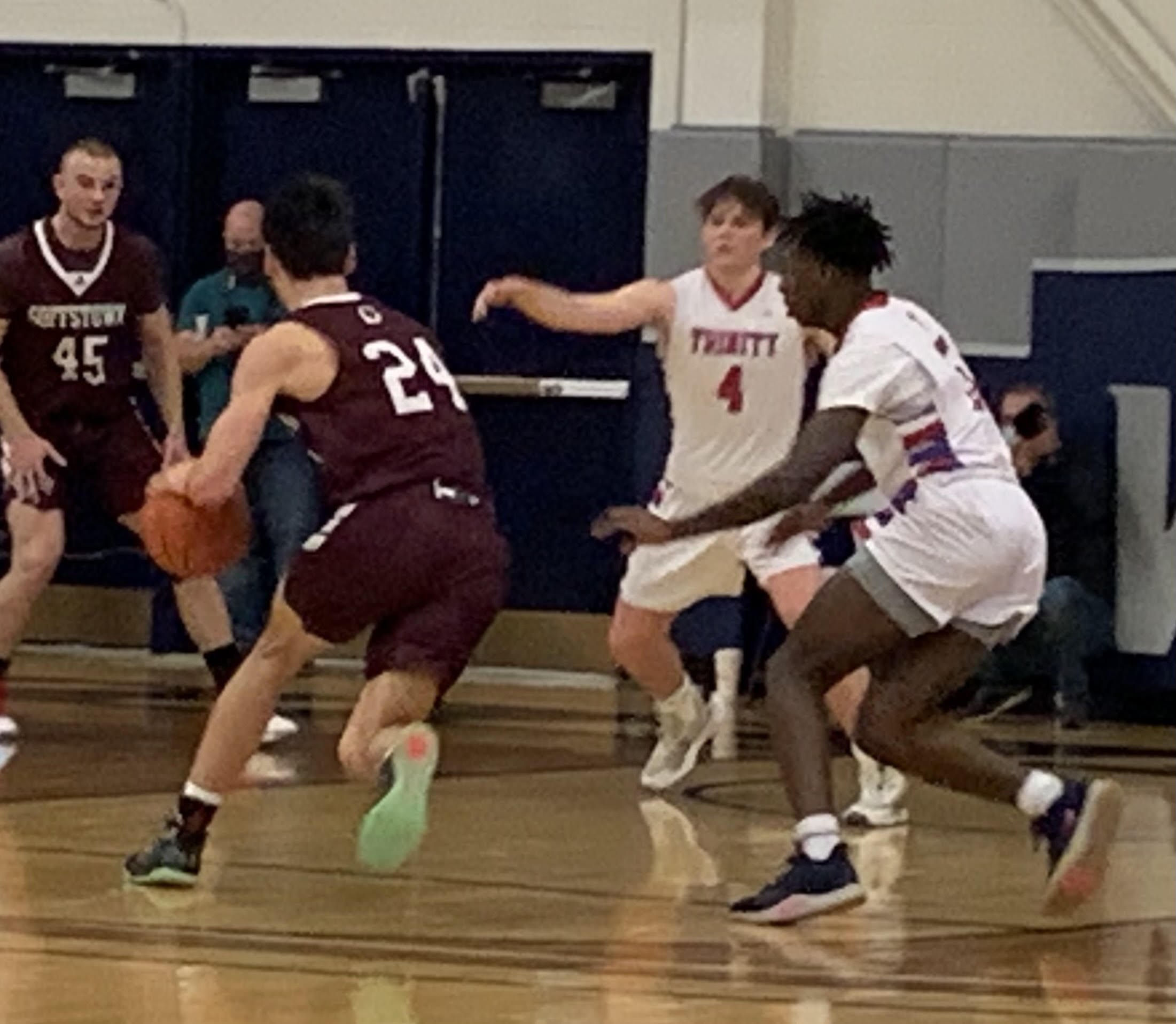 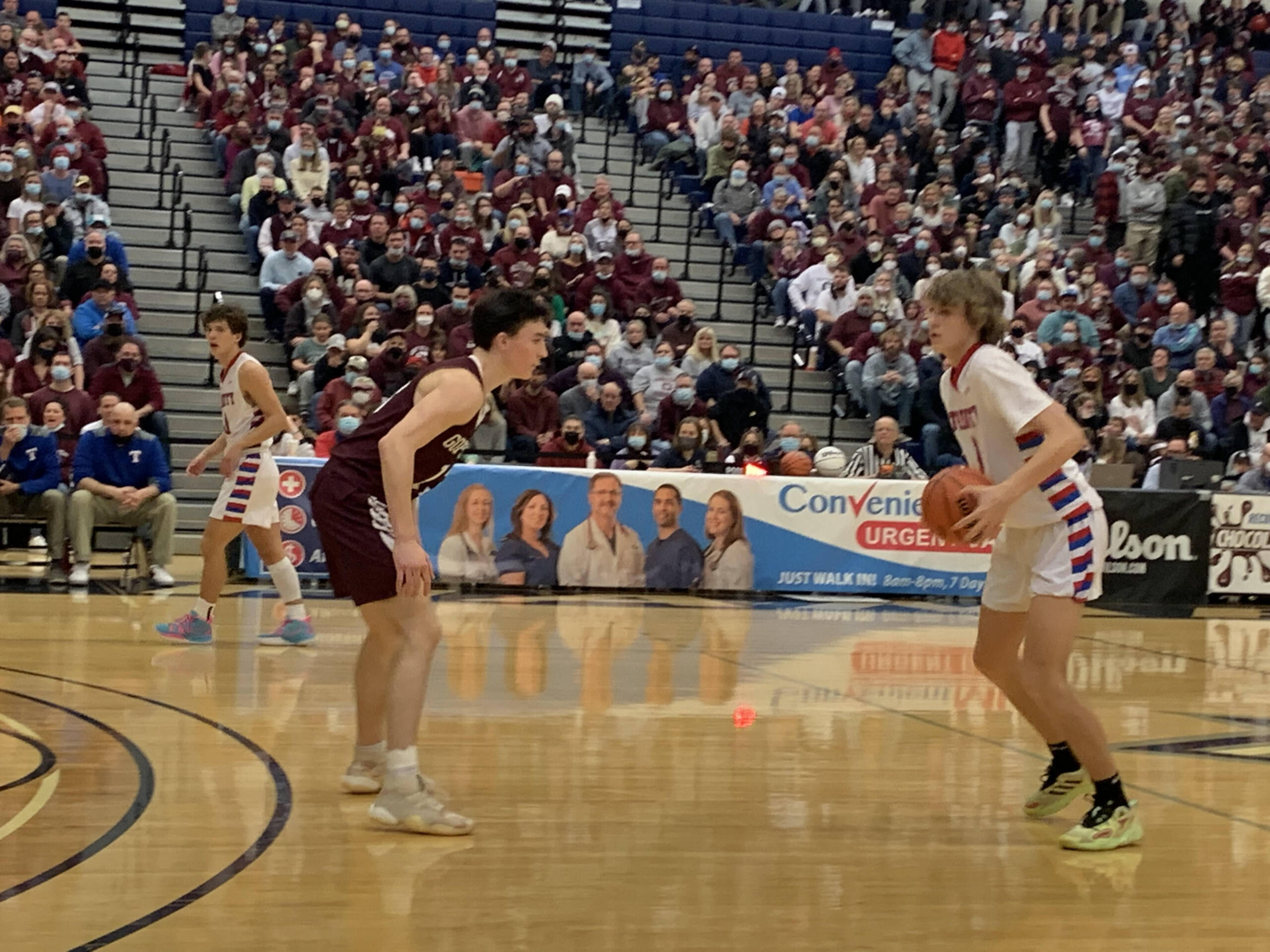 After a free throw by Bike made it 63-60, Goffstown had a chance to tie but Nyomah went high for a monster block on a 3-point attempt by Strand in the corner.

After an inside hoop by Strickland made it a one-point game, Nyomah made one of two free throws to make it 64-62 with 27 seconds remaining.

Again, Goffstown had a chance to tie, but Baguidy missed a runner in the lane and Politi was able to tap the rebound to Nyomah, who was fouled with 12 seconds left. This time, the sophomore rimmed out both attempts, giving the Grizzlies one final chance.

Baguidy brought the ball upcourt and looked to rotate the ball around the perimeter. But Bike had sloughed off his man and was watching Baguidy’s eyes. He anticipated the bounce pass to the wing, reached into the lane, made the steal and sealed the championship. 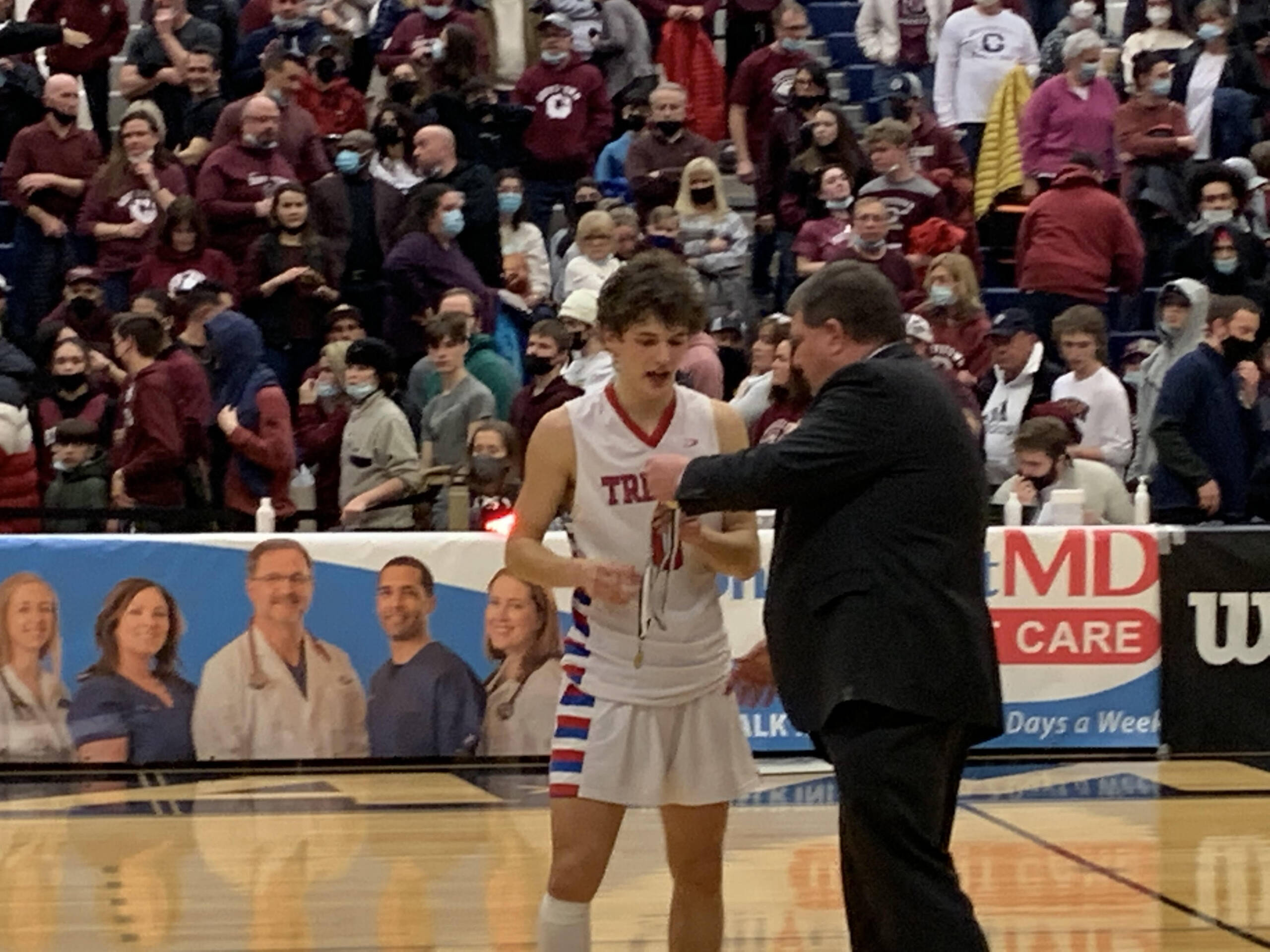 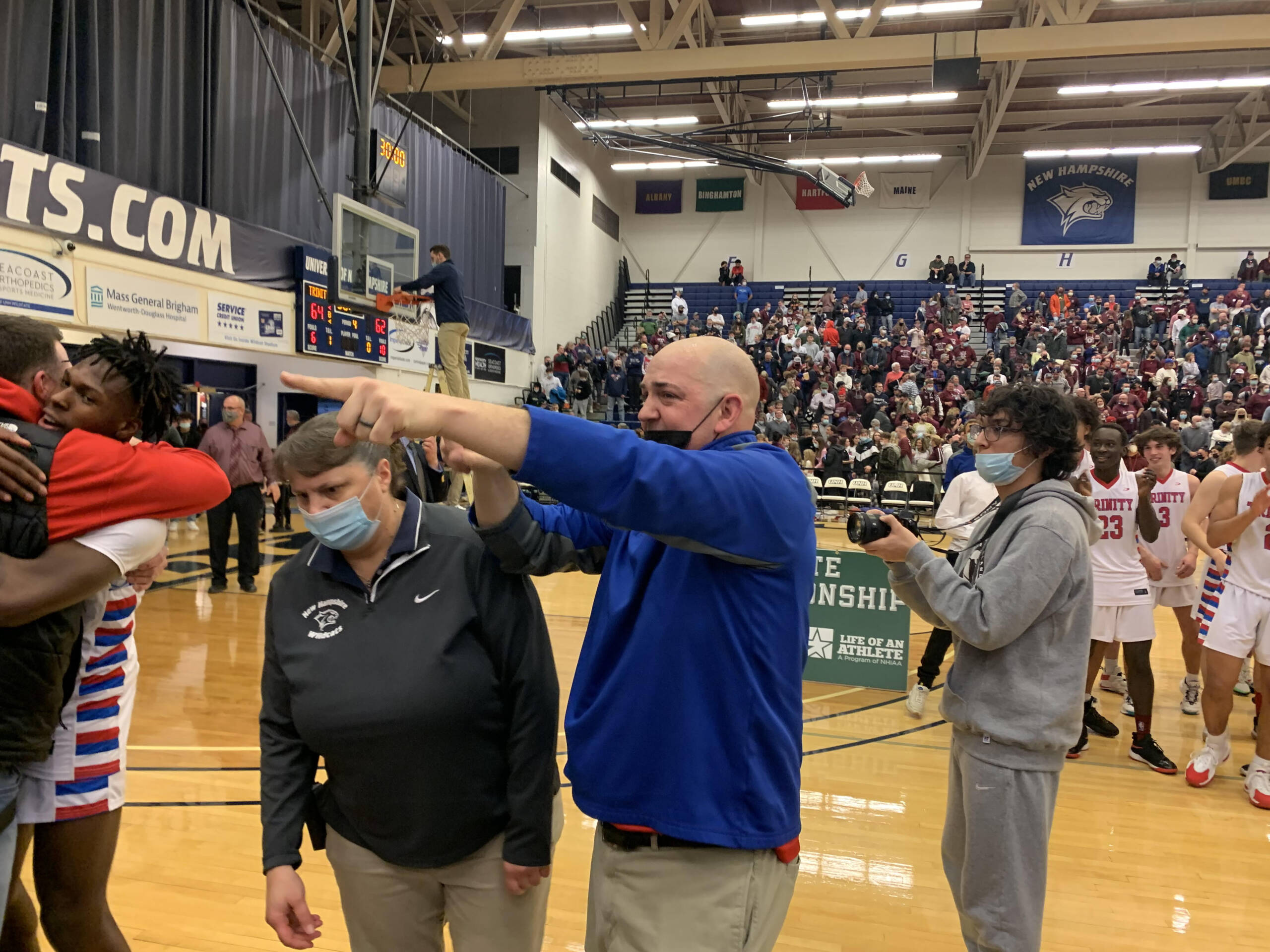