MANCHESTER, NH –  Eddie Edwards, a Republican candidate for Congress, announced Wednesday at the Hilton Garden Inn in Manchester that his campaign filed a complaint with office of Gordon MacDonald, the New Hampshire attorney general, and said it will follow up with similar complaint to the Federal Election Commission, charging a federal law was also violated.

The complaint charges that an attack mailer sent on behalf of opponent Andy Sanborn  portrayed “The Real Eddie Edwards” as being pro-gun control, pro-abortion, pro-illegal immigration and as being a government insider-turned-lobbyist, and that it did not include a statutorily required disclosure of who paid for the advertisement. The Sanborn campaign said the mailer was produced by Manchester-based Spectrum Marketing. 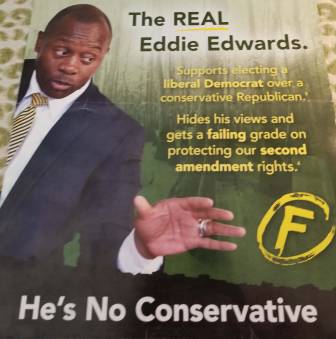 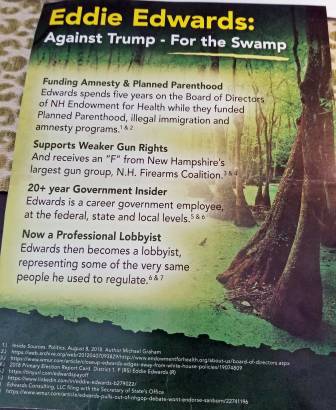 Edwards broadened his attack, charging that Sanborn has shown a pattern of “predatory behavior” at the New Hampshire State House. Edwards showed a thick stack of transcripts of state Department of Justice interviews earlier this year of people who worked or served in elected positions at the State House. The interviews were conducted as part of the Attorney General’s probe into whether a former state Senate intern was bribed with money and a staff job for not reporting a sexually explicit comment made to him by Sanborn in in February 2013. Sanborn has maintained the comment was a joke and has charged the probe was prompted by his “establishment” political enemies. But Edwards said Sanborn’s inappropriate behavior has gone far beyond that one instance of what Sanborn has described as telling a crass joke.

When WMUR reporter John DiStaso asked about Edward’s support for President Donald Trump in light of his Access Hollywood statement, which was released on October 7, 2016, about grabbing women by the genitals, Edwards said that he was satisfied by Trump’s apology.

Some of Edwards’ leading state supporters vouched for him during the press conference, including:

“State Senator Sanborn’s illegal actions are part of a pattern and highlight the character flaws in his behavior. In haste to cover up his numerous sexual misconduct scandals, Senator Sanborn took action that was not only illegal, but also untrue. In today’s press conference, Eddie was joined by leading Granite Staters and showed why he is not only a strong conservative, but he is the only conservative candidate who can win in the general election in November.”

Sanborn and Edwards will be among five Republican 1st Congressional District candidates participating in a Granite State Debate, co-hosted and to be televised on WMUR on Sept. 6 at 7 p.m.