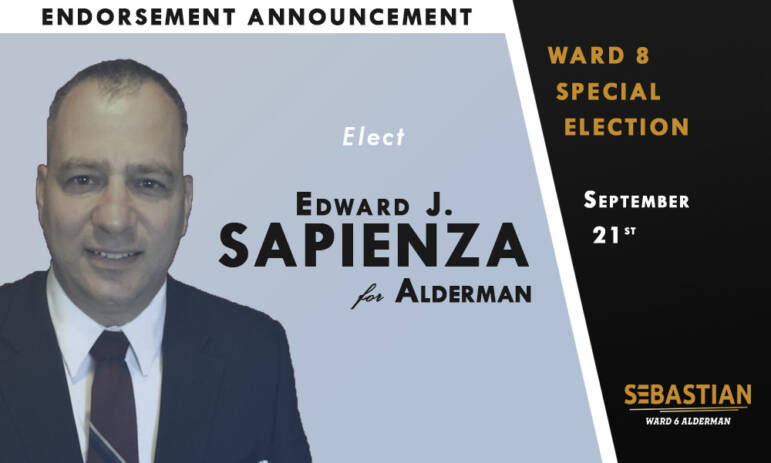 In the three-way Aldermanic race in Ward 8, Ed Sapienza has picked up another endorsement.

All three men filed in both elections.

“Today, I am proud to endorse Edward Sapienza in his bid for Alderman in Ward 8 Special Election. He is a veteran, a retired correctional officer and a “working-class guy,” who will serve the citizens of Ward 8 honorably and selflessly, and will be an outstanding addition to the Manchester Board of Aldermen,” said Sharonov. “Ward 8 desperately needs to fill in the vacancy with another strong advocate for taxpayers. Out of the three options voters will have on Sept. 21st, Mr. Sapienza is the clear choice both by ideology and by overall background. I look forward to working with Ed Sapienza on the Board.”

To date, Girard has announced just over two dozen current and former elected officials that have endorsed him in his campaign.

On Monday, Girard also announced that he will be holding a meet and greet with retired U.S. General and 2022 U.S. Senate Candidate Don Bolduc on Monday, Aug. 16 from 6:30 to 8 p.m. The event will be held at NewVo Interiors at 60 Rodgers St. in Manchester. More information can be obtained by e-mailing sandygnh1@gmail.com

As of 5 p.m. today, Manchester Ink Link has sent out voter guide questionnaires to 36 candidates running for Mayor, Alderman and Board of School Committee member. The deadline for replies is Sept.14, and Manchester Ink Link will post responses as they are received on vote.manchesterinklink.com