And for each of these, vice-versa.

Social drinkers and alcoholics of my type are in the same position. I may have briefly been a social drinker. Very briefly, since the first time I drank alcohol I was in 8th grade at a high-school cast party for a production of “Oliver.” My social drinking career may have begun at, say, 10:15, when the party started, and lasted until shortly before I ended up passed out on Jack Edwards’ lawn, face down in my own vomit. When one of the high school kids called my dad, he had to drag me to the car. To be very generous, my social drinking period lasted a bit less than two hours. After that, I drank for effect. I drank to get drunk. Apparently, social drinkers aren’t like that.

As for effect, I really believe alcohol interacts with me differently than it does with non-alcoholics. From the moment I take a first drink, I want to get to that brief space between the fourth and fifth drinks, that place where my perception of the universe changes and I am, briefly, on top of the world, able to look down with disdained amusement at all beneath me. I am 10 feet tall and bulletproof. After that, I drink until I am either knee-walking drunk or passed out. Apparently, social drinkers aren’t like that.

As I write this, it was a week ago that I spent my last night in Pittsburg, five miles from the Canadian border, alone outside the Tiny White Box. Wanting to mark the occasion, I built a small campfire in a fire pit as the sun was going down. There, I meditated on what I’ve lived in the last nine months, reviewed the writing I’ve done (and left undone) and thought about the next stage of my journey. In short, I looked back with pride and forward with excited anticipation. As the sun went down, the fire grew brighter until I was engulfed in darkness but for the glowing wood in front of me and the stars above me. After a couple hours, I spread out the fire’s embers, covered them with sand and went to bed. While I didn’t need the fire, it added to the experience.

From conversations with social drinkers, that campfire is analogous to their experience with drinking. On certain occasions—a wedding, a barbecue, a neighborhood party—they have a few drinks. These drinks add to the experience, lubricating fellowship, increasing celebration. Although they like having alcohol as part of the wedding or barbecue, the bride wouldn’t be any less lovely nor would the grilled chicken be less delicious without booze there.

So, if normal drinkers see a few drinks at the right time as being like a campfire to mark a passage, how does this alcoholic view drinking? 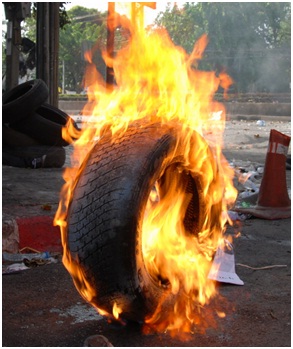 That’s what starting with a few drinks does for me. On a typical Thursday night. When I’ve got things to do in the morning.

On a night when I can drink the way I want always to drink?

Imagine that gasoline-drenched tractor tire burning on an ammo dump. At best it’s going to smell real bad. At worst someone’s going to lose a life.

I am not a social drinker, although for a long while I thought if I just learned to stop at the fifth drink I could become one. Now I know if I were a social drinker, I’d be drunk all the time, with the odor of burning rubber lingering in the air and the sound of explosions soon to come.

Keith Howard used to run alternative schools and an improvisational theater until he had the chance to drink the way he’d always wanted to. By 2007, Howard was hopeless and homeless and toothless. While implementing a suicide plan — waiting for a bus to take him to his jumping-off point, he experienced a moment of clarity, went to the VA Medical Center in Manchester, and said, “Hi. I’m a veteran named Keith, and I don’t want to be alive anymore.” After detoxing, he was introduced to a program of recovery that remains central to his life. Eleven years sober now, Howard was director of Liberty House, then lived for nine months in a six-by-12-foot converted motorcycle trailer in Pittsburg, NH, a few miles from the Canadian border. Today, he is back in an undisclosed Manchester location, working for Hope for NH Recovery, maintaining his website (tinywhitebox.com) and writing. Howard still lives in the tiny space, although that appears the only box he is able to stay inside of.