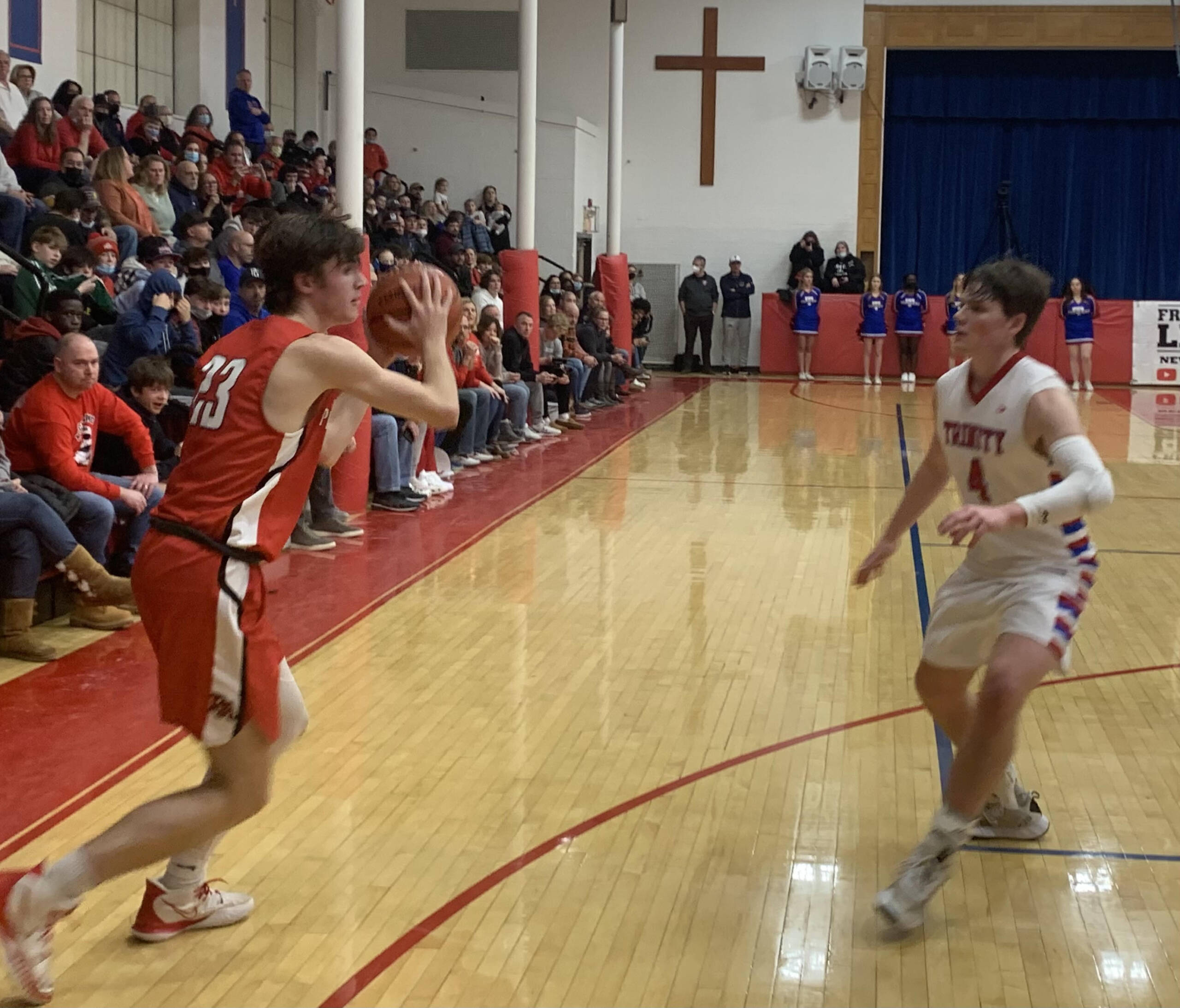 MANCHESTER, NH — When the offense isn’t clicking, a championship team will still be able to find a way with its defense, hustle and sheer strength of will.

Trinity High defended its place atop the New Hampshire high school basketball rankings, rallying in the fourth quarter for a 52-44 win over No. 2 Pinkerton Academy, before a standing-room-only crowd, Monday night. In fact, the crowd was so big that fans were being turned away at the door because the Manchester Fire Dept. had determined the Trinity Gym was at full capacity. 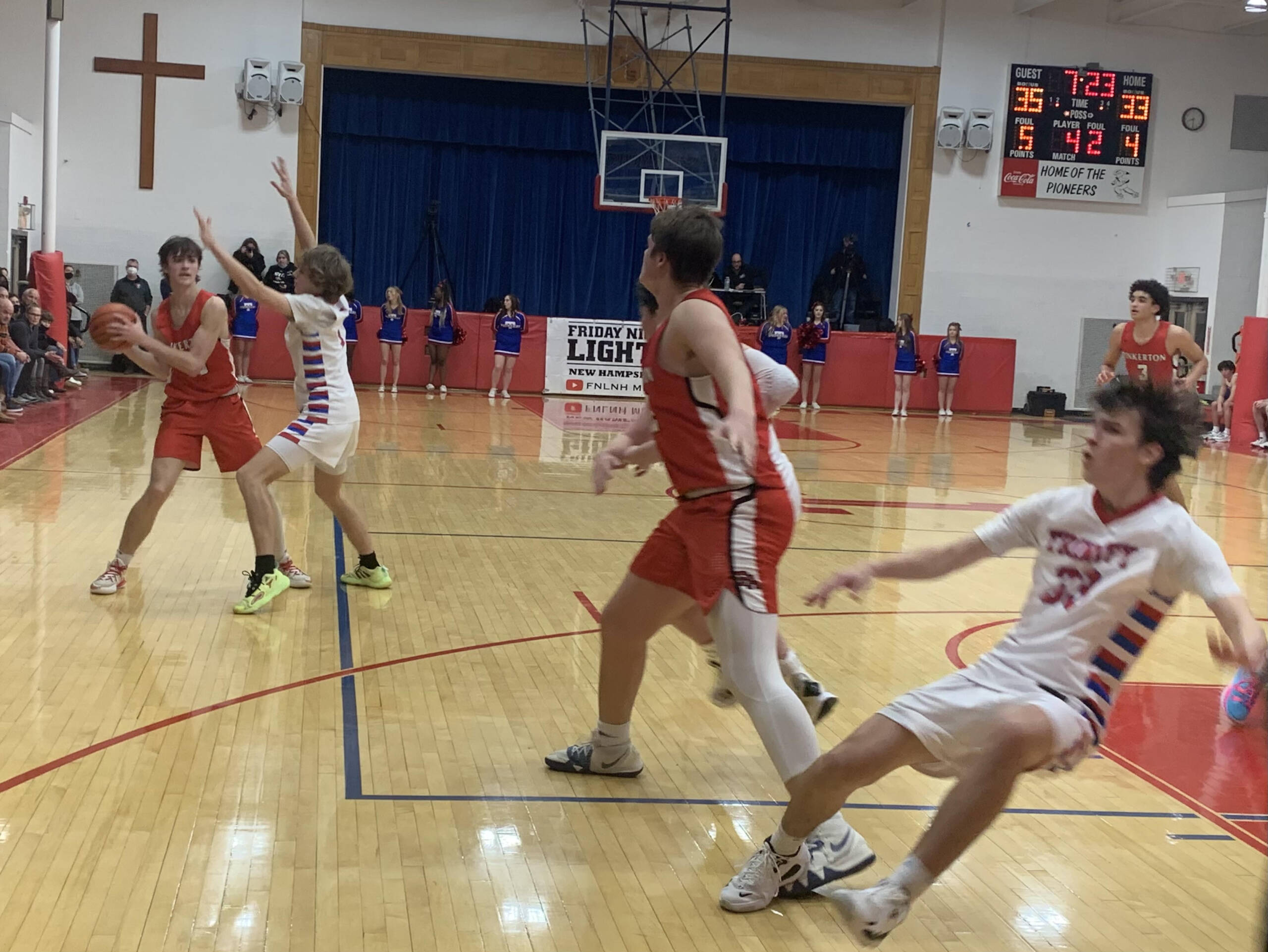 “We really didn’t play well, Tyler (Bike) didn’t shoot well, but we walked out with a ‘W’ because we have a lot of tough guys,” said Coach Keith Bike. “A lot of guys stepped up. Mark (Nyomah) played very good, both ends of the floor. And Devohn (Ellis), after a horrible game Friday, for Devohn, he came back and he showed toughness and he played well.”

Trinity sophomores Mark Nyomah and Tyler Bike each had two huge steals in the fourth quarter. But it was the play of senior Andrew Politi throughout the game that was the bedrock of the Pioneers’ defense. Politi, at just 6-feet, was charged with guarding Pinkerton’s hulking center, Jackson Marshall. The 6-7 sophomore checks in at well over 200 pounds and uses his frame effectively in the paint and to outmuscle most opposition on the glass.

Marshall came into Monday’s game averaging 19.9 points and more than 10 rebounds per game. Politi held him to just 16 points for the game and outscored Marshall, 5-2, in the final 6:30, as Trinity engineered its comeback.  Moreover, Politi’s pestering defense helped force Marshall into four turnovers in the fourth quarter. 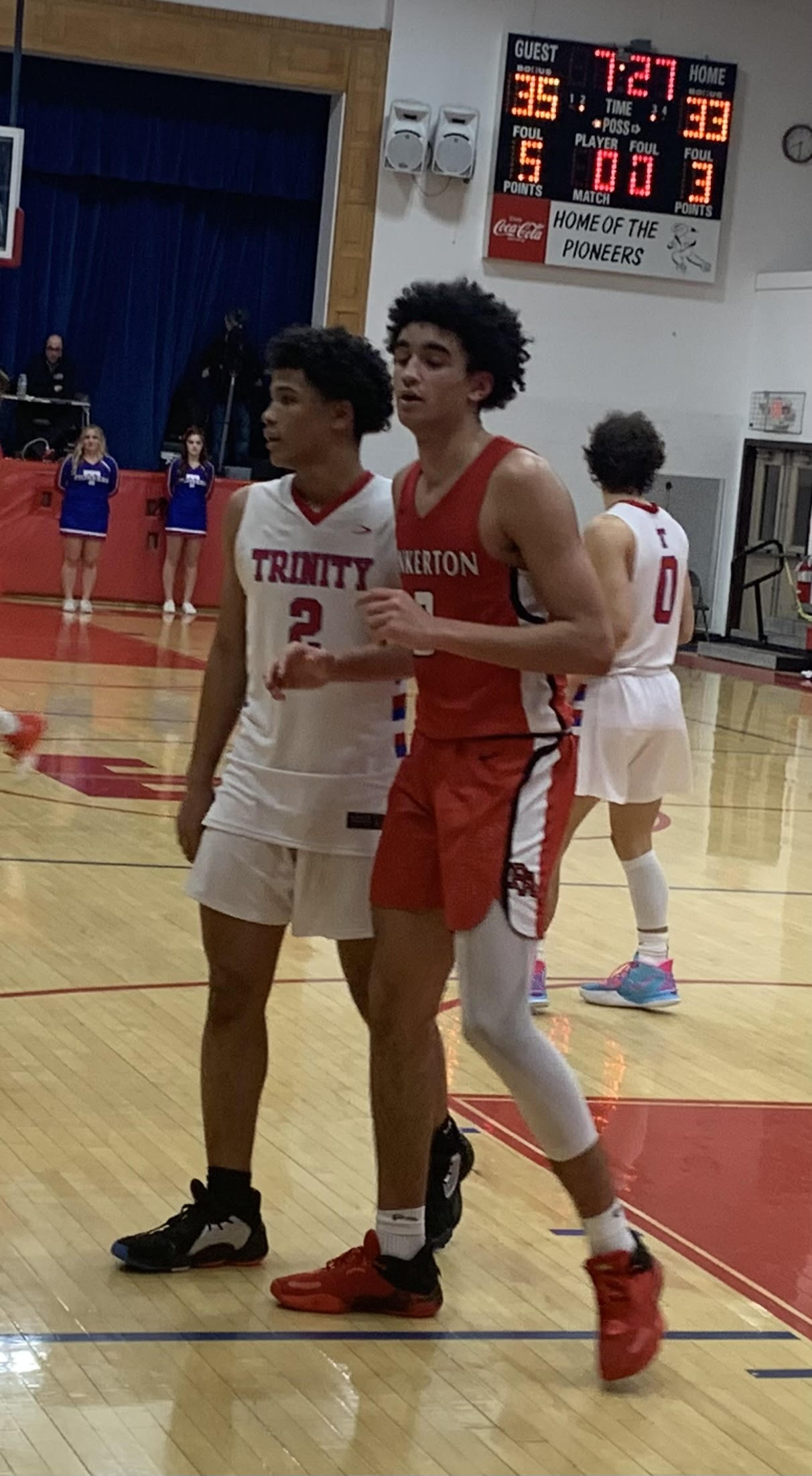 “I just try to keep my composure and outwork (taller players) because I know they’re bigger. I’ve just got to try harder than they do,” said Politi. “I just try to be as physical as possible. It’s exhausting but it’s what we need to do in order to win.”

It was just another day at the office for Politi, who is routinely called upon to guard opponents six or seven inches taller in Trinity’s man-to-man defense. Often times this means subjugating his own offense in order to focus on his defensive responsibilities.

“A lot of (college) coaches are missing the boat on (Politi), whether it’s Division 2 or 3, you’ve got a kid that works harder than I have ever seen a kid work, with trying to be a better player every day,” said Coach Bike. “You talk about his toughness, battling 6-7, 6-8 guys and just doing whatever the team needs him to do. Sometimes he’s shooting 3s and killing it and sometimes he’s locking guys up and holding them below their average.”

Nyomah led Trinity with 17 points, to go along with four steals and eight rebounds. He was on fire in the first quarter, with 10 points, as the Pioneers claimed an early 12-9 lead. 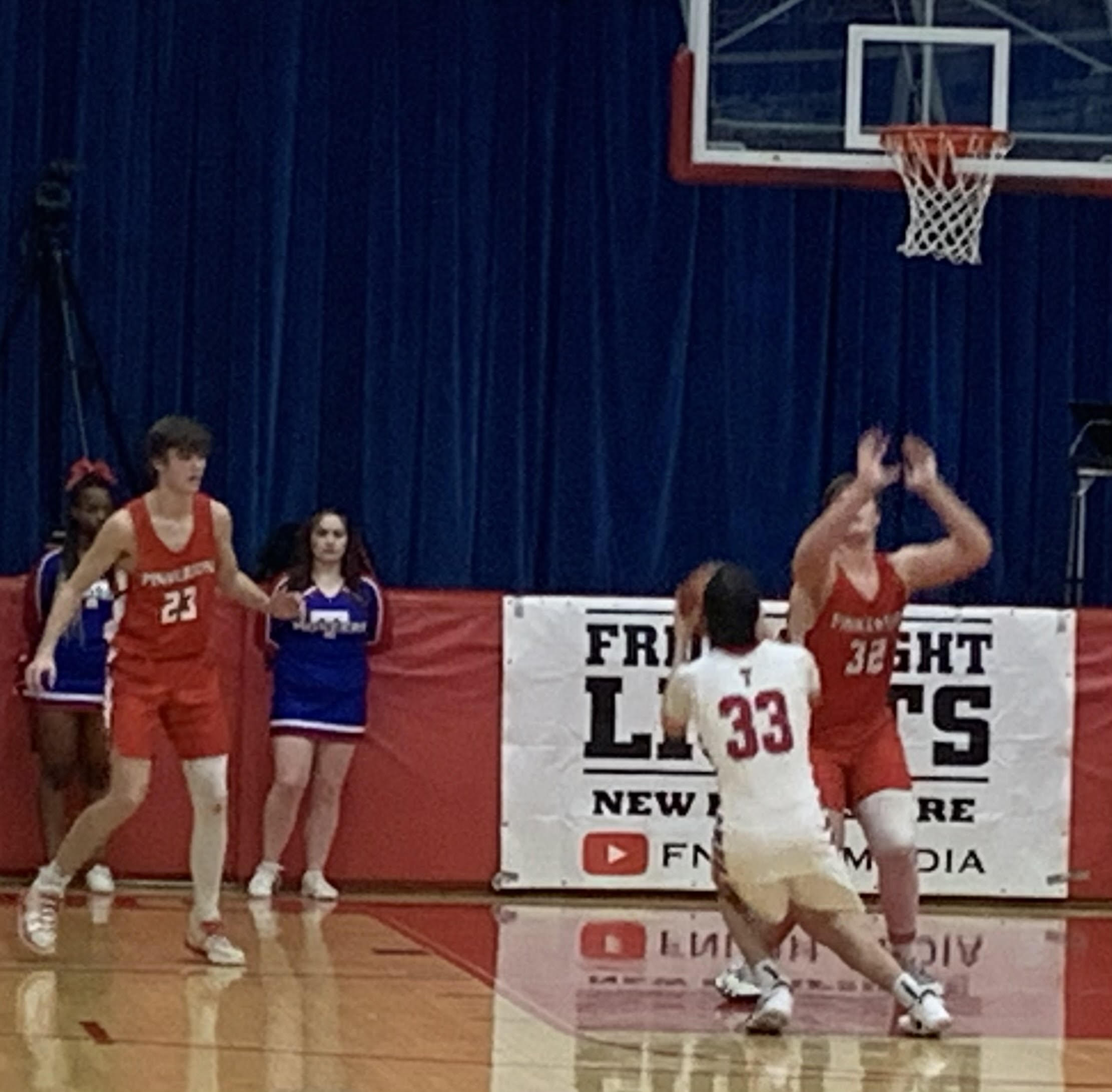 Pinkerton began to exploit its size advantage in the second quarter, pounding the ball inside to Marshall, which, in turn, opened lanes in the paint for Anthony Chinn (10 points, 6 assists) and Tyrone Chinn to begin attacking the rim.

The Astros looked like they might take a 0ne-point lead into the locker room at halftime until Tyler Bike hit a driving layup at the buzzer to give Trinity a 25-24 edge.

Trinity, a team that drained 15 3-pointers in its last game, was ice cold from the perimeter Monday night. Bike finished with 11 points but most of those points were from the free-throw line (7 of 11).  As a team, Trinity connected on just three 3-pointers, one each for Politi, Nyomah and Max Shosa.

How cold were the Trinity shooters? For a stretch of 7:30, spanning the third and fourth quarters, the Pioneers managed just two points. That was enough for Pinkerton to turn a 31-29 deficit into a 39-33 lead with 6:20 to play in the game. Marshall slapped an exclamation point on the run with a brutal block of a layup attempt by Trinity sophomore Devohn Ellis. Ellis went down hard on the play and took some time to get back to his feet, though no foul was called.

Politi (9 points) finally ended the drought with a 3-pointer from the wing. On Pinkerton’s next possession, Nyoman stripped the ball from Marshall at the high post and went coast-to-coast for the layup that sliced the Astros’ lead to 39-38, with 4:18 remaining. 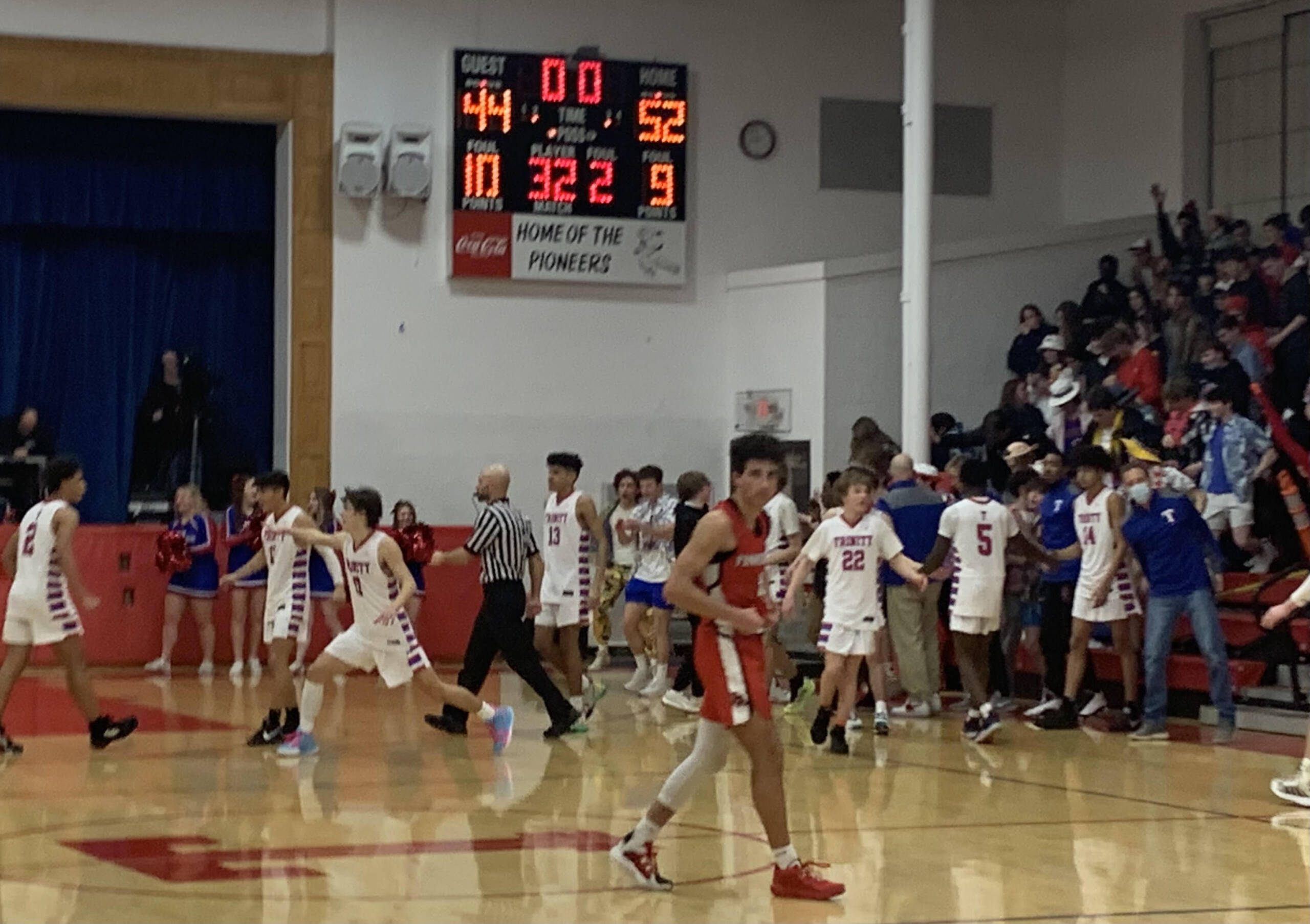 Pinkerton tried to answer but Bike made a sensational defensive play to chase down Tyrone Chinn, strip the ball as Chinn went up for a layup and knock the ball off Chinn’s knee and out of bounds for a turnover.

Ellis (10 points) brought Trinity all the back, scoring on a power drive along the baseline to tie the game, 41-41, with 2:55 left in regulation. After a free throw by Anthony Chinn, Trinity grabbed its first lead of the fourth quarter when Nyomah scored off a nifty pass from Bike in the paint.

With 58 seconds left, Nyomah gave Trinity the lead for good (45-43) with a pair of free throws. On the ensuing inbounds play, Bike made a spectacular steal of Marshall’s inbounds pass. As he was falling out of bounds, Bike made a desperation move to keep the ball in play. It wound up in the hands of Politi, right under the hoop. The senior scored the easy layup to up the Trinity lead to 47-43.

From there, it came down to Trinity making its free throws, which it did, to seal the win. 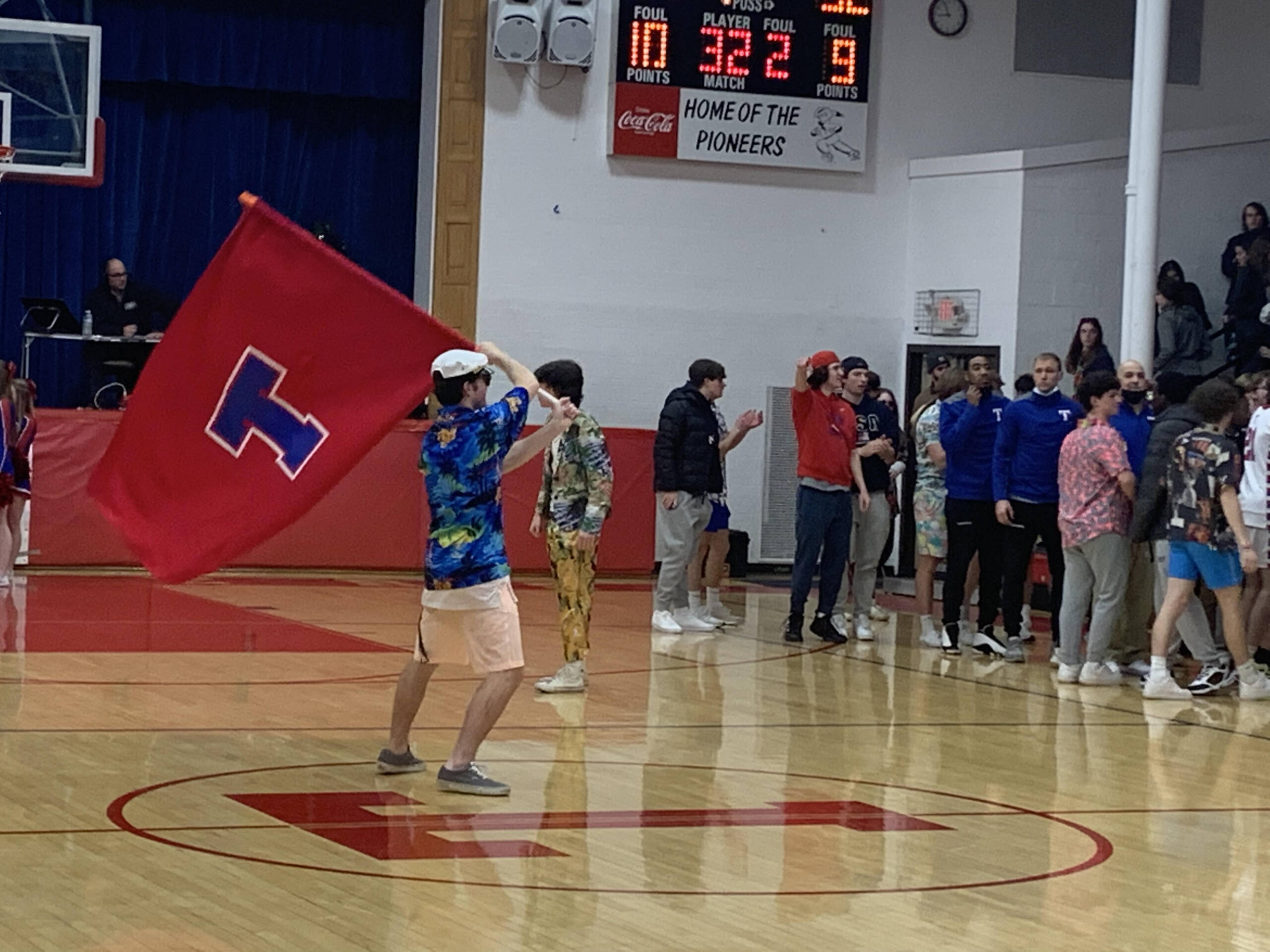 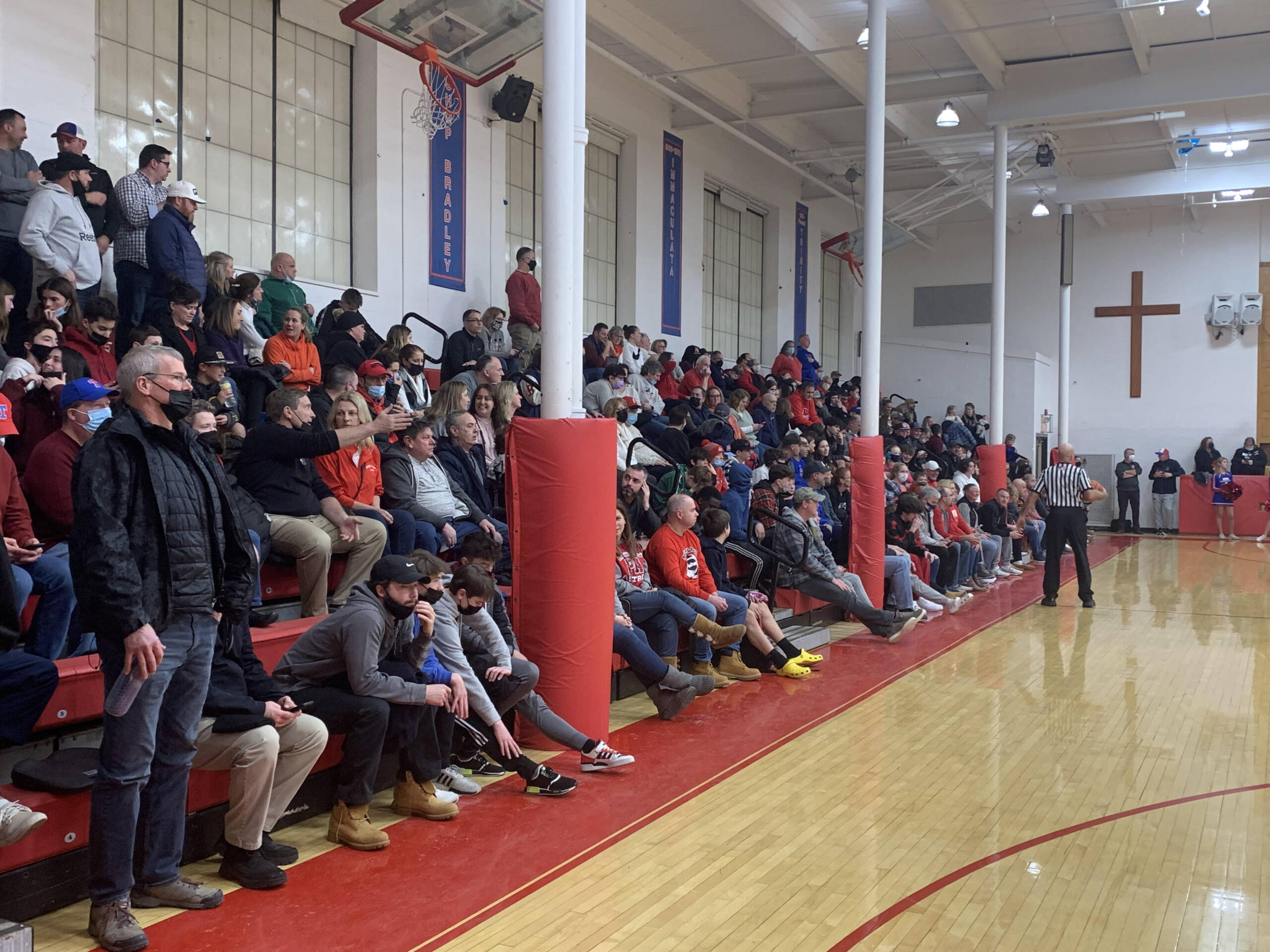