The church complex was created as a marriage between a 112-year-old mansion on a bucolic Elm Street property called “The Brook” and a transplanted congregationalist church located near city hall called the Franklin Street Church.

At the center of its creation was a descendent of Manchester royalty, Mary Carpenter Manning, who became a wealthy philanthropist in her old age.

Elements of the Franklin Street Church, including stained glass windows, pews and ceiling plasterwork by the original plasterer were installed in the smaller chapel, and steeple chimes from the old church are still used today in the new steeple.

So when Hoysradt, looking to qualify for some preservation grants, submitted the Manning House for consideration to be added to the historic register, the Historical Resources Council saw historic value in more than just the house.

Hoysradt said the mansion needs some work done on the roof, particularly rotting parts of the wooden eaves and corroding copper flashing, which he estimates will cost about $250,000 to fix. Getting on the historic register will help give the building “some recognition” needed to qualify for grants, including LCHIP matching funds from the state.

Overall, the brick house is in relatively good shape, he said.

The Manning estate was constructed in 1908 shortly after Mary Carpenter, the daughter of industrialist Frank P. Carpenter, and granddaughter of Aretas Blood, whose vast fortune grew from founding the Manchester Locomotive Works, married Charles B. Manning, the scion of Charles H. Manning, who was the General Superintendent (top boss) of the Amoskeag Manufacturing Company.

Mary and Charles Manning, both inheritors of the Queen City’s capitalist heyday the century before, grew up together as next-door neighbors on Elm Street, and would put down roots in a Georgian Revival-style mansion a short distance up the road.

Like a brick plantation, the front of the house is marked by symmetry and Greek columns, and faces the wooded area and Ray Brook to the south, rather than the roadway.

Mary Manning was widowed in a freak train accident that took the lives of Charles and his two brothers in 1924. Five years later, tragedy struck again when her 15-year-old son Frank Carpenter Manning died.

Manning was an active member of Franklin Street Church, where she married, where she taught Sunday School for 25 years and served on committees. In her later years, the church became one of her principal interests, though she was known locally and nationally as an active philanthropist, helping those in need during the Great Depression.

When the old church, built in 1847, had fallen into disrepair in 1957, Manning donated her 10-acre estate to the church, at the age of 74, and helped raise the funds to build a new church, which was completed and dedicated on June 5, 1960.

Over time, changes were made to the complex, which also includes a caretaker’s cottage and a gazebo. Storage sheds and chicken coops were relocated and repurposed, a barn which kept cows onsite for fresh milk was converted into a garage, and more recently converted into a thrift store.

The church altar was built in the tradition of New England congregationalist churches, with the pulpit and bible in the center, and a massive organ hidden behind wall panels. Decades later, the church, which today has a membership around 200, Hoysradt said, decided, not without controversy, to build a raised platform and move the pulpit to the side.

While much of the estate is preserved today with its dining hall, sunroom, kitchen, foyer and drawing rooms — with original wall siding, marble fireplaces, furniture and an antique grandfather clock — the upstairs bedrooms and servants quarters have been converted into offices and counseling rooms for Pastoral Counseling Services, a nonprofit mental health provider that was originally founded by two Brookside ministers in the 1980s and is now staffed by 17 psychotherapists, according to its website.

Perhaps the greatest time capsule of the former church is the small chapel, which today is rented out to a Romanian Orthodox Church, Hoysradt said. It contains truncated original pews, reassembled woodwork, stained glass windows featuring the four evangelists (Matthew, Mark, Luke and John) and a stained glass window behind the altar of a red-winged archangel Michael standing atop a slain dragon, a dedication to Manning’s dead son at the bottom.

Michael is the patron of children, Hoysradt explained. The stained glass windows were painted by renowned artist Charles Jay Connick, he said.

All those elements were brought over from the Blood Memorial Parish House built in 1930, by the old Franklin Street Church, which also included classrooms for Sunday School and a bowling alley in the basement. 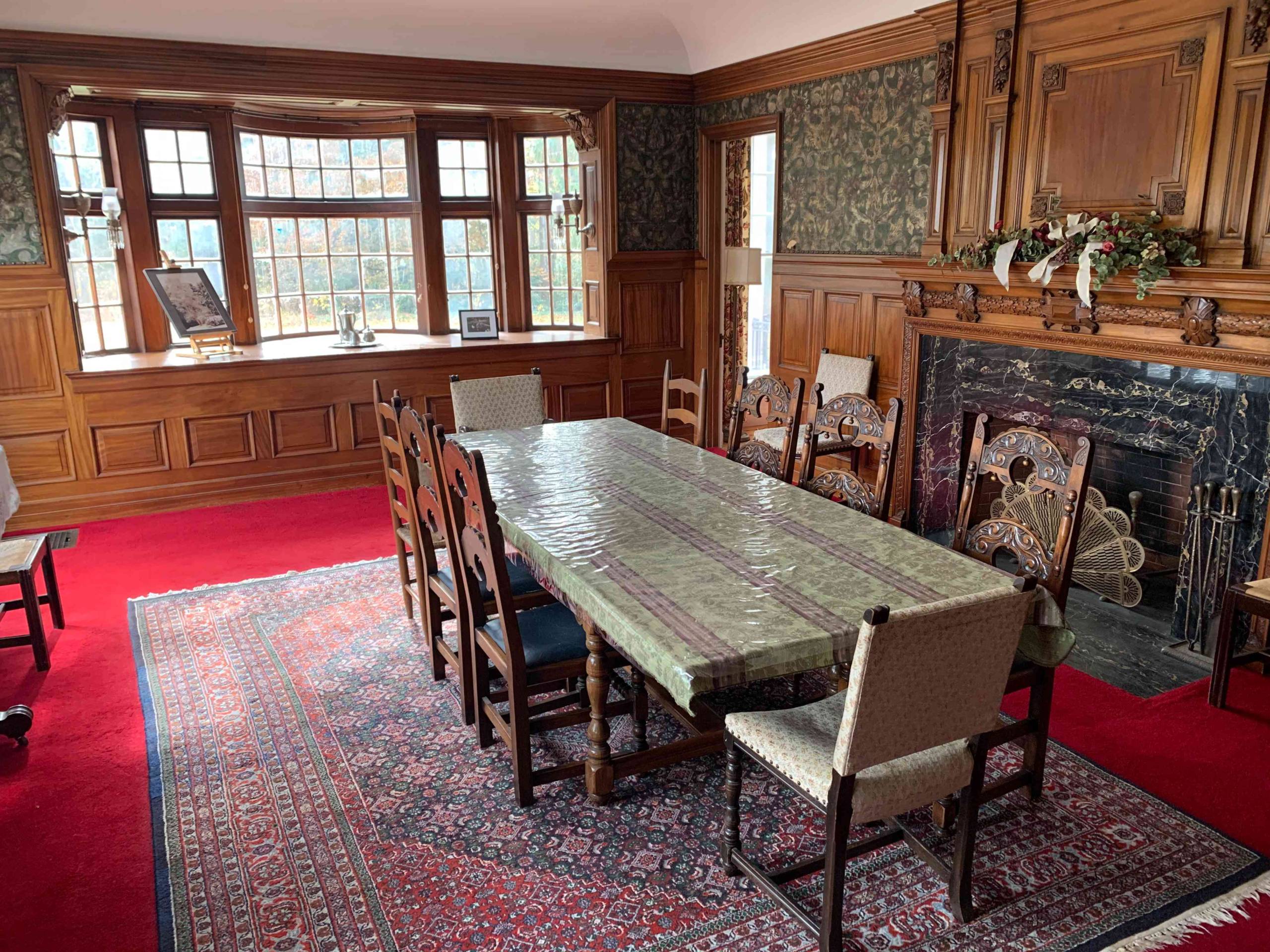 When they rebuilt the chapel at Brookside, they used the same plasterer to do the decorative ceilings, nearly 30 years later.

“They had to pull him out of retirement, but he was still available,” Hoysradt said.

The Brookside Church bell tower contains the same nine-bell chimes that Gov. Frederick Smyth gifted the Franklin Street Church in 1878. And Hoysradt said they are played by hand still today.

Five or six years ago, the church decided to convert the old barn and garage into a permanent thrift shop, which today sells used items like books, clothes, kids stuff and furniture. It’s staffed entirely by volunteers.

Hoysradt said the store usually generates about $30,000 in revenue annually for the church, but this year it won’t come close to that since it was closed for several months due to the pandemic.