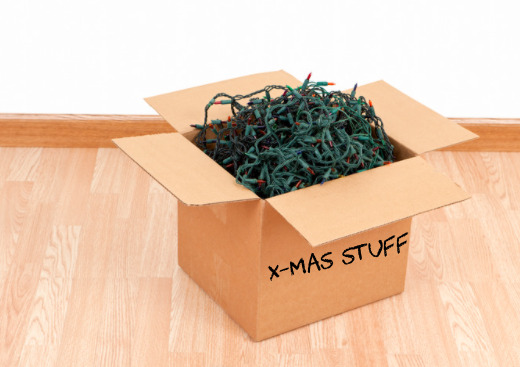 Thanksgiving ends, and my wife sends me to the basement to haul the cardboard boxes labeled “Christmas Stuff” upstairs. By the time I make it to the living room—winded from my lack of exercise and Thanksgiving excesses—Burl Ives is already urging us to have “a holly jolly Christmas[1]” on the Pandora station playing on the flat screen above the fireplace.

And for me, it’s a season wrought with emotional ambivalence and mood fluctuations punctuated by an indefatigable sullenness.

While I was downstairs grabbing the Christmas decorations, I made it a point to grab the light box[2] my wife bought me last year. Maybe it will help.

Since late-adolescence, I’ve battled with Seasonal Affective Disorder (SAD), which is a form of depression that is related to changes in the seasons. In many cases, like my own, it pronounces itself acutely in the change from autumn into winter[3].

Its onset typically starts in late-November and peaks around Christmas-time into the New Year, which corresponds with the Winter Solstice, or the shortest days of the year.

Many doctors believe that SAD[4] is a result of a change in brain chemicals, the lack of Vitamin D and serotonin, which sunlight is known to produce. The light box is meant to mimic direct sunlight and help increase the production of said serotonin.

So each year, when the holidays come around, I start to experience something I’ve labeled “The Paradox of Miserable Joy.”

In short,[5] the joy of a holiday season somehow makes me incorrigibly melancholy. This isn’t to say that I’m an ornery killjoy who dismisses the holidays and sulks, Scrooge-style, alone in my basement writing dark poetry[6] while anticipating ghosts.

In fact, it’s quite the opposite.

I enjoy the holiday season—in spirit—quite a bit; hence, the paradox. And over the years, I’ve become quite adept at cracking sardonic jokes and faking joy during these ponderous periods of my depression.

I’ve also been able to pinpoint the triggers that can send me spiraling. During the holidays, especially, I need to be cognizant of my alcohol consumption[7], which only exacerbates my morose moods and often leads to embarrassing outbursts of rage or maudlin breakdowns.

Conversely, exercise and routines are helpful for me. Moving my body, as opposed to sleeping long hours with a pillow pulled over my head, is—unsurprisingly—cathartic.

And sometimes a hug from another human being, feeling their warmth and a connection of concern, can go a long way.

I would never be presumptuous enough to say that any of the aforementioned—light boxes or alcohol abstinence or exercise or human hugs—will cure depression, but they can help assuage the symptoms[8].

And for God’s sake, if anyone reading this is struggling to manage right now, know that you’re not alone and please reach out to someone[9]. In this battle with our mental health, we need to have each other’s backs.

“Should I string the lights on the banister again this year?” my wife asks, working out the knots on the string of small bulbs.

[1] I will admit to having an affinity for traditional Christmas music, but the second that Mariah Carey song comes on, I want to burst my eardrums with butter knives.

[2] For those who may be unfamiliar with light boxes, they’re used as a form of light therapy for people who suffer from Seasonal Affective Disorder.

[3] It also occurs, for me, in late-June when the spring changes to summertime. I’ve come to call it my “Independence Day Breakdown.”

[4] It’s estimated that 10 million Americans have been diagnosed with SAD.

[5] Mostly because I’ve never fully fleshed out a definition.

[6] I don’t need the holiday season to sit in my basement and produce dark poetry. It comes naturally to me, year-round. It’s my Super Power.

[7] I would never pretend that I’m always successful in this pursuit.

[8] Often in tandem with medication.