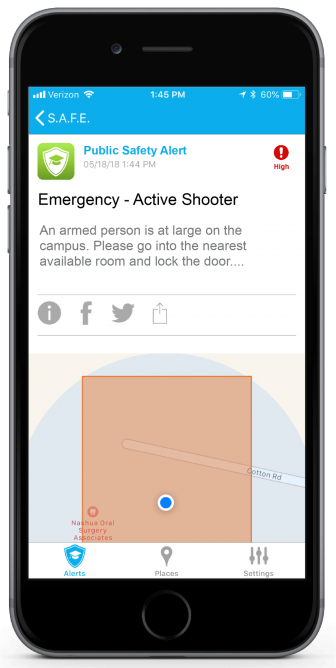 MANCHESTER, N.H. – Earlier this week, the Manchester Board of School Committee (BOSC) voted to mandate a memorandum of understanding be signed by Ping4 Inc. before it will participate in Ping4’s S.A.F.E. app.

The app, available for free on the Apple Store and Google Play, is described as a system “to alert parents, staff and non-first responders during an emergency and efficiently notify them of current incident and safety information.”

On May 19, 2018, the board conditionally approved the district’s participation in the app. However, that approval was pending upon the removal of a promotional video featuring Manchester Central High School students without proper approval.

That video, which depicts a live-shooter situation at Central High School and features footage of students as well as police personnel role-playing, was removed from the S.A.F.E and Ping4 websites, but still is live elsewhere on the internet.

In the proposed memorandum of understanding, the district requested Ping4 follow stringent information privacy guidelines as well as prohibiting Ping4 from using the Manchester School District in any marketing materials or solicit funds from any third-party without approval of the school district.

BOSC at-large member Richard Girard brought the item to the board’s attention believing that forcing the memorandum would make Ping4 disinterested in partnering with the district, agreeing with the privacy measures, but disagreeing with the other parts of the proposed agreement.

“It’s absolutely crazy to say (to Ping4) “we use your stuff, but you can’t tell anybody,” he said.

A motion to reject requiring the memorandum failed by a vote of 10-4, with Girard and Freeman joining Ward 7 member Ross Terrio and Ward 8 member Jimmy Lehoux in approving the rejection. Ward 12 member Kelly Thomas was absent.