Family, both by blood and through service, including Retired Navy Cmdr. David J. Kenney, LCDR Kevin Sherman and his wife Theresa and HT3 Angelina Zamora from the Portsmouth Naval Shipyard, Mayor Joyce Craig and Sen. Maggie Hassan attended the celebration at the Manchester VA Medical Center Nov. 9 to honor Mr. Roy on his 105th birthday.

Retired Navy Cmdr. Kenney shared the history of the U.S.S. Franklin at the family’s request.  Seamen 2nd Class Roy served on the USS Franklin which was Commissioned in January 1944 and served during several campaigns in the Pacific War, earning four battle stars. She was badly damaged by a Japanese air attack in March 1945, with the loss of over 800 of her crew, becoming the most heavily damaged United States aircraft carrier to survive the war.  “Sharing some history around service is an important way of celebrating Martin, he was a real Navy man,” said Diane.

The group of fellow Navy service members presented Mr. Roy with a USS Franklin baseball cap with his name on the back. “This way folks know where you’ve been when they meet you,” said Retired Cmdr. Kenney.

The party offered a 1914 Year in Review by way of trivia.  When Mr. Roy was born, the average annual income was $1,257, a gallon of gas was 13 cents, and a gallon of milk was 36 cents.  Importantly, the average life expectancy was 50 years then – Mr. Roy has beat those odds by double what was expected plus five years, and it is most certainly because of the incredible family support he has.

Mayor Craig presented Mr. Roy with a proclamation from the City of Manchester, “I wouldn’t have missed Mr. Roy’s celebration of his 105th, all that he has done for our country and to celebrate his – it’s just something I would never have missed.  It was fun to meet Mr. Roy and his family in person and thank them – it was fantastic!”

Theresa Sherman, wife of LCDR Kevin Sherman shared, “It is important to us as a Navy family to support other Navy families and to recognize them….I mean the sacrifices his family has made, and he made; we just wouldn’t have missed this.”

Senator Hassan shared the value of service is something that was instilled in her by her father who served in WWII.  Hassan presented Seamen 2nd Class Roy with the Congressional Record entered in recognition of his service and accomplishments and wrote, Mr. Roy, thank you for your service, patriotism and dedication and for standing for freedom.  With every good wish” – Maggie Hassan.

Various generations of Mr. Roy’s family were present from his great-granddaughter, Virginia, who came from New Jersey to his nephews and nieces from Vermont and his sister-in-law from Massachusetts.  There was no end to the loved ones who attended including dear friends, Shelly and Brian Newcomb.  They have been his friends with Roy for the longest time.  Shelly takes care of Mr. Roy one day a week and cleans his house.

Although Mr. Roy has several loved ones to care for him, at 105 years old he still takes a weekly trip into Hannaford to do his groceries and visits Ollie’s following that for a nice haddock dinner. 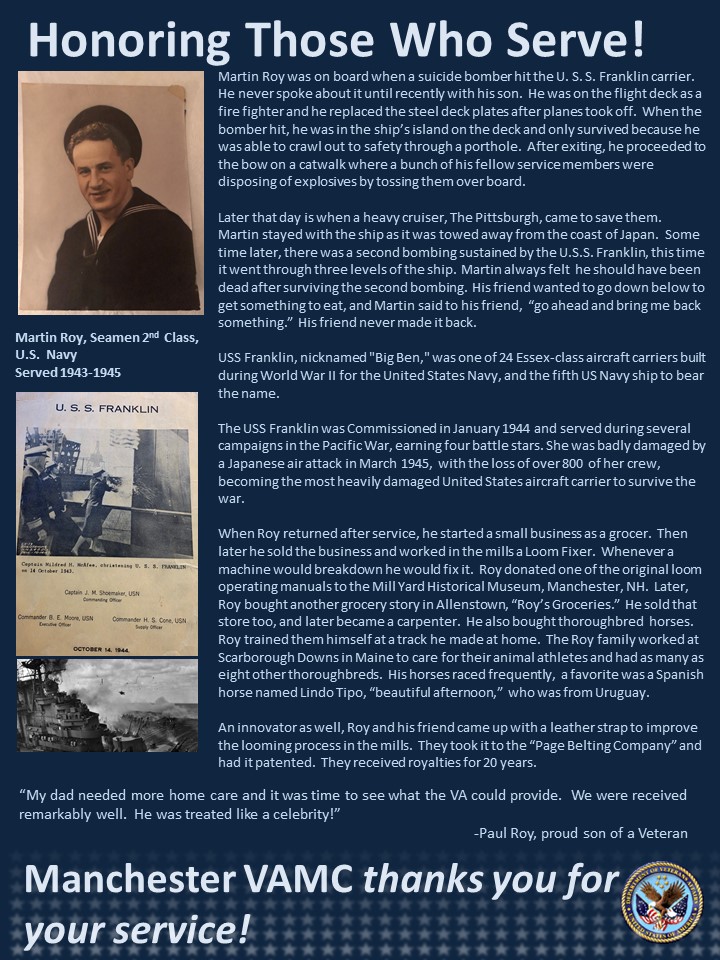