MANCHESTER, NH – Long an amenity seen only in larger cities, a bike sharing system was rolled out Monday in New Hampshire’s Queen City. The system, which features six stations and 30 bicycles, will allow city residents, employees, and visitors to affordably rent bicycles to traverse the city.

Bike Share Manchester launched officially June 5 in Veterans Park in downtown Manchester, a last-minute move due to rain for the ceremony, originally planned at one of the bike stations.

Speakers and guests gathered under the canopy on the park stage during the launch event.

Plans call for expanding the local bike share system as additional sponsors are secured. Station locations are available for use 24/7 at: Stanton Plaza, the downtown Manchester YMCA, Puritan Backroom, City Hall Plaza, 1230 Elm St. in front of the Southern New Hampshire University offices, and Gateway Park, located at the northeast corner of Granite and Commercial streets.

To begin using the bike share system, you need to download the Zagster app on your smart phone, create an account and select one of three membership tiers (see below.) Once you enter your credit card information, you can unlock a bike using the app. 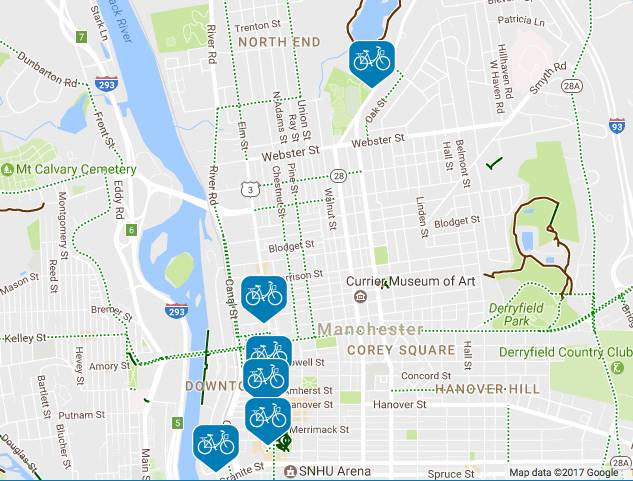 If you don’t have a smart phone you can text (202) 999-3924 to get instructions on renting a bike using text messaging. There are FAQs found here that answer questions about the program.