I was lucky to have a conversation with up and coming author Artemis Crow last weekend at the Red Arrow Diner. Upon meeting, she stated she is a “virgin” to the diner; chuckling at the fact of having to use that word (don’t worry — she was given a “first-time customer” sticker before she left).

After a relatively short wait, we were able to sit at a table so that I could ask her my list of questions about her life, her Zodiac Assassins book series, and what made her decide to become a writer.

Artemis Crow is a Texas native where she also attended high school and college. Her father was in the Air Force so she moved around, but mostly in the south until she came to Salem, NH, with her husband in 2017. Not only does she have a love for writing, but she grew up as an avid reader sharing her fond memories as a child going to the library or waiting to hear the daily bells of the mobile library that would come down the block.

Her mother had her signed-up to several book-of-the-month clubs for kids and each month she would receive a surprise book depending on the theme of the club, such as a mystery. Favorites that come to mind are “The Hardy Boys,” “Nancy Drew,” “The Wizard of Oz” Series by L. Frank Baum (of which she still owns the original) and due to her love of horses, “The Black Stallion” series by Walter Farley.

At dinner time her parents would introduce new words into the conversation and if she didn’t know what a word meant, she was told to get the dictionary and come back to read out loud the meaning. Artemis and her mother bonded over books, both consider themselves “super readers,” exchanging books they haven’t read yet and selling them to half-priced book stores when they were done.

“I wasn’t the kid at the grocery store at the checkout line waving a candy bar or crying because mom wouldn’t buy it. I was the one that would run up with a book that would say ‘mommy, mommy, can we buy this?’, says Artemis.

Prior to becoming a writer, Artemis was a veterinarian technician who handled both small and large animals. She was married at the age of 36 and due to getting hit by a drunk driver while she was on a motorcycle that almost severed her left leg, she knew that she would have to retire early. It was becoming more difficult for her to be on her feet all day. This is what led her to eventually decide to become a full-time writer in 2005. 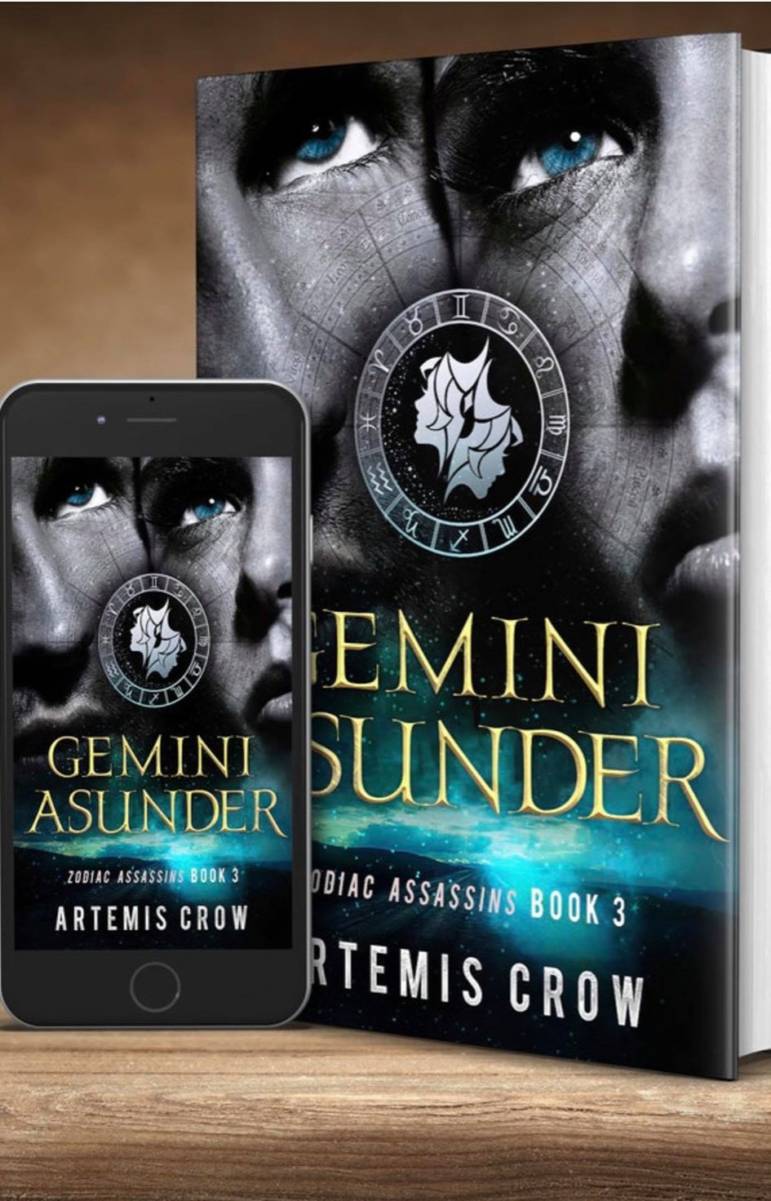 Initially, the first book in the Zodiac Assassins Series, “Lyon’s Roar,” had all vampires living in a subterranean world to protect themselves from humans. Once she got to the end of the book she thought “Nope, not going to do vampires. I want to do something that’s totally my own.” That’s when she scrapped most of the book, keeping only 25 percent while spending the next four years developing a subterranean world with 21 different species she created.

Ideas that have helped lead her to create this paranormal fantasy blend includes the show “Supernatural” because she loved the relationship between the brothers, “Black Dagger Brotherhood Series” of paranormal romance by J.R. Ward because she fell in love with the concept of the band of brothers not related by blood, and the TV show “Leverage,” because “sometimes bad guys are the only good guys you get,” which is the premise of the show. She felt it fit perfectly with how she would create her Zodiac Assassins.

“So what if we have these bad guys, these Zodiac Assassins that are killers, I mean they have killed. They don’t do it for fun they do it because it’s their job and it’s what they’re required to do, but what if they are the only saviors of humanity when everything goes wrong, but they are not good guys.”

Zodiac Assassins is a 25 book series, 12 novels based on each zodiac sign and the 13th novel is a wrap-up. In-between each novel are novellas that focus on the women characters who are introduced in each previous novel and tells their story. There are romantic elements, but that is the subplot because Artemis felt it was important for the males to find their mates to help evolve and enlighten the male characters.

Reading each novella is important to keep up with the series because there is a lot of world-building, she says. “It’s not just fluff or filler. You will miss a big chunk.”

Just as important as creating a whole new world is coming up with an appropriate pen name. She went with a name that sounded gender-neutral and had mythology tied to it. Her maiden name was Bird, but she realized Crow had a “better punch.”

“There is a lot of darkness in my books and crows are more symbolic. It was a better fit,” she says. Not only that, it helped people remember her name.

Artemis Crow says she is open to converting her stories to screenplays. In fact, she admits that when she was character-building that she had actors or fashion models in mind to help build the species. Actor Chris Hemsworth for “Lyon’s Roar” or Jason Momoa to play Scorpio, to name a couple.

When describing her landscapes, she would turn to Pinterest or Deviant Art to inspire her. The photos, artwork, and images had a lot of uniqueness that helped her build her society. Occasionally, she will post one of the images that inspired her and list the artist or photographer and their website so that they can get recognition. She is such a visual writer that to convert it to a production would require a lot of high-end special effects, which in turn would require a bigger production company such as HBO or Netflix to take on.

Monday through Friday from noon-7 p.m. is her writing schedule, a regimen she keeps, with occasional breaks, of course. If she is on a roll, then she continues to write on the weekends. Otherwise she has the weekends off. She is a self-published author, but still keeps her own deadlines and her editor also has deadlines.

She accepts that there are some days she isn’t inspired to write. If she has a deadline, she will write anyway keeping music or playing a movie she knows lightly in the background helps. If she doesn’t have a deadline, then she takes the day off. On her day off if an idea or new material pops in her head, she will write it down and will work on it the next day. On her days off she likes hiking, watching TV, napping, and spending time with her husband and dogs. She and her husband have been involved with a Doberman rescue since 2005. They have two special-needs dogs and a German Shepherd.

Her advice on writer’s block?

“You can’t edit a blank page,” a quote taken originally from Nora Roberts. She encourages aspiring writers to sit down and write anyway, whether that be a poem, blog, or a recipe.

“The action of writing will help you continue that habit and make sure you don’t fall back,” she says.

1.) Read and read extensively and not just the genres you love to help build your structures and stories.

2.) Work on your craft. “You don’t know what you don’t know.” Join local and national literary groups that talk about general and specific topics about the genre you choose.

3.) Build a social media following, especially if you decide to get a publisher because they look at those details.

6.) Join FB groups for writers because their feedback and support is helpful.

Also, if you are going the self-publish route, “You need to save, from day one — it’s kind of like setting up a college fund for your newborn. You need to put aside money so that when you’re done with your book you can hire a professional editor.”

Artemis Crow revealed that she went high-end for her books costing thousands for her editor, $4,500 for her cover designer, and $400 for her formatter.

When it comes to stress about the writing process of this series, although fun, developing the first skeletal structure of the plot comes to mind, particularly the inciting incident.

“The protagonist is off on a journey. It’s not something that happens to them, but it’s a decision they are making on their own volition,” she says. It is not one of Artemis Crow’s stronger points, so she takes a class by Laura Baker called Turning Points before each novel to assist.

For those of you who are interested in purchasing a book, you can get the printed version through Amazon only. The ebook is available through Amazon, Barnes & Noble for the Nook, and Kobo for your android device.

You can also meet her in person on November 16-17 in Framingham, MA, at the Super Megafest Comic Con for a book signing. If you stop by her table, without purchase, she gives away free packets with her business card and a necklace with a charm from themes of the book. Also, if you’re lucky she will dress up both days as one of the characters she created.

Veranette March is a freelance writer and actress from Manchester.

Below: Listen and watch as Artemis Crow joins Peter White and the Morning Show, Nov. 6, 2019 edition.