MANCHESTER, NH — Tucked underneath an unassuming beige building beside a ubiquitous Dunkin Donuts, the Thrive Outdoors Community Leadership Center has slowly been coming to life. Nestled along overgrown railroad tracks and in the basement of an old train station, the center is home to a boulder wall, low ropes elements, and a wild challenge course. Walking through the door from the rear parking lot, guests are greeted with a forest of trees to hang their coats and a log cabin office. It’s a refreshingly green and vibrant space housed beneath a kickboxing gym, along the bustling stretch of Elm Street between Queen City Avenue and Granite Street.

Following a successful community-focused Grand Opening event at the end of January, where locals were able to enjoy food truck fare, have their faces painted, meet princesses, learn how to survive a zombie attack, tackle a wild challenge course, listen to a live performance of a ukulele ensemble while strolling and scavenger hunting, and more, February proved to be a slower month, a month of growing pains.

I often refer to the lingering slushy stretch of weeks between February and March as “Farch” – a time where winter is still here, though the joy of the holidays and the January rush of all-things-new has faded. It’s a time for simply surviving until the sunshine breaks through and the buds burst open.

For Thrive Outdoors and their Community Leadership Center, Farch has been a cacophony of final projects, scrambling for permits, discouraging bottom-lines, and the seemingly never-ending task of trying to make ends meet while balancing family and personal lives, and marketing on a shoestring.

But finally, we are here, with the tips of tree branches blushing red with buds, temperatures are creeping into the 50s and 60s, spring and summer are officially on the horizon and Thrive Outdoors is prepared with a calendar full of events for all ages.

On a Monday evening, a group of teens sits around a table with square sheets of paper and an array of markers. They’re jotting down words about themselves, their “Why” and their “What” – Why being what motivates them, and What being what do they think they bring to this group. They’ve only just met and 10 minutes later they’ll be practicing each other’s names while competing against a stopwatch in a game to better their time moving tennis balls around in a pattern of their own making. It all seems fairly simple for an icebreaker activity, but the laughter and camaraderie as they begin brainstorming and thinking outside of the box on ways that they can cut their 13 seconds down, maybe in half, is something not to take for granted, especially in an age where typical 13 to 18 year-olds would prefer to be on their phones.

This is Teen Adventure Group (T.A.G.) and over the next three months, this group of teens will learn about different types of shelters, how, when, and where to build them, but, also, what it means to shelter their inner self from negativity. T.A.G. is one of Thrive Outdoors original and most successful programs, most recently running in Derry, but now in Manchester. They meet two Monday evenings a month at the Community Leadership Center, and then go on a day-long adventure on the fourth Saturday.

Among other upcoming programs that Thrive is offering is a unique Summer Adventure Day Camp designed to take children ages 7-12 out on explorations throughout New Hampshire. Thrive’s camps will have an 8-1 student to instructor ratio and the additional help of teen counselors.

Thrive Outdoors bases all its instruction on their Big Five Principles of Survival: Mindset, Shelter, Fire, Water, and Food. Each day of camp will highlight one of these principles as the instructors will teach campers skills for both wilderness survival, but also team building and self-worth. Each day will begin and end at the new Thrive Outdoors Community Leadership Center on Elm Street, but most days will take campers outside to various locations both in Manchester and in the surrounding areas, for nature walks, shelter building, fire building, an optional overnight campout, and more.

In an age of social media where generations of kids are spending more of their days in front of screens, and where anxiety is on the rise, there has perhaps never been a time when stepping out into nature has been more needed. The calming, therapeutic, power of spending time in the wilderness has been scientifically proven, and for Thrive Outdoors founding partner, Jake King, it’s vital to overall wellbeing.

In addition to these day camps, Thrive runs monthly Camp Grit programs at its’ Hopkinton location. Run by Jake, a former Army Ranger and police officer, Camp Grit is a program for ages 12 and up that focuses on learning military-style wilderness survival and leadership skills.

As I write this, it’s a Tuesday afternoon and Thrive has had to postpone one of their most popular programs, Nerf Wars, due to a couple of small snags in the final steps along the journey to be officially, officially open. Considering how far the center has come from when it was conceived in Jake’s mind a little over a year ago, when the team was lugging chunks of debris and rubble from the basement and into a cold February afternoon, these final few hurdles feel as small as hiccups. They’re the crinkling of candy wrappers while watching a movie – mildly annoying, but easy to look past if you’re focused on the story and the action unfolding right in front of you.

Farch has been long and not without hardship, but such is the life of opening a new venture such as this, and it has also been full of promise. Jake and his team are already excited for all the community connections they have been making and will continue to make.

Spring and summer are nearly here, and Jake and his team know that the days of the Leadership Center being as quiet as this are numbered. To learn more about the wide variety of programming that Thrive Outdoors offers for all ages, or to register for one of their camps, please visit www.thriveoutdoorsnh.com

Thrive Outdoors is located at 190 Elm Street. There is programming for individuals as well as businesses, school groups, leadership building and camp experiences. Learn more here or call 603-625-6600. 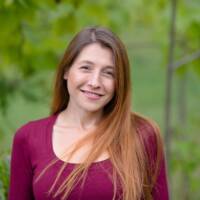 Melanie Haney is a photographer, writer, wife, and mother of four. As a writer, she has been the recipient of literary awards and her fiction has been published in national magazines and in an assortment of literary journals. Her short story collections ('The Simplest of Acts' and 'This Perfect Mess') can be found on Amazon. Outside of creative pursuits, she is the co-director of the Thrive Outdoors Community Leadership Center on Elm Street.