Guy Routhier didn’t start his life with the dream of being a school bus driver. He didn’t end his 40-year career in human resources with that goal either.

But retirement didn’t come naturally, and Routhier had a few friends who drove school buses and enjoyed it. So at 71, still restless and intrigued, he jumped aboard, getting licensed and trained in the Manchester School District.

“My wife was not particularly crazy (about it),” he said. “I had too many things to do around the house.”

Five years later, Routhier, 76, is still driving. It’s one of the best jobs he’s had.

“It’s the sense of accomplishment,” he said. “I mean, some people say, ‘that’s no big deal.’ It really is. It’s getting those kids to school safely.”

This year, the profession is under increasing strain.

As school districts ramp up plans to return to a full year of in-person learning, they’re facing an acute resurgence of an age-old problem: a shortage of school bus drivers.

The issue has existed for years, brought on by cyclical changes in the employment market and other factors. But COVID-19 has accelerated what had already been a steady stream of driver retirements, as fears of transmission drove some to leave the job early.

Parents left the industry to attend to their families. Older drivers left out of concern for their personal safety.

“I’ve been in the industry for a little bit over 25 years and this is the worst that I have ever seen in all my years,” said Karen Holden, vice president of the New Hampshire School Transportation Association.

The shortage has major consequences for school districts, officials say. Schools have had to contemplate making longer routes for children to get to school, or cutting some services altogether.

Holden estimated that there are “hundreds” of openings across the state.

This summer, school districts and the New Hampshire School Transportation Association have mounted a campaign to recruit more workers into the school bus industry, emphasizing the ability to serve the community, earn a useful commercial driving license, and connect with students.

Officials have held job fairs across the state to make a final pitch to prospective employees. Bus companies have reached out to drivers who recently retired, offering sign-on and retention bonuses to sweeten the deal, and promising to pay for training and licensing costs. They’ve even offered drivers the option to take their children on board to mitigate day care needs.

On Wednesday, they turned to the press.

Framed by a ring of school buses in the Bow Community Building parking lot, education stakeholders from drivers to Department of Education Commissioner Frank Edelblut held a press conference to make people aware of the shortage and appeal to interested drivers.

“We want to see all of our students back to in-person instruction,” Edelblut said. “And part of making that happen is making sure that we have bus drivers that help us transport the kids to the schools.”

Routhier was there, too. “I take great pride in what I do,” he told reporters. “I enjoy it. There’s obviously some downside, but it’s all in how you deal with it.”

The shortage is hitting all parts of the state, from rural areas in the North Country to cities.

“All districts are facing a shortage at a crisis level,” Holden said. Some schools have retained only about 50 percent of their drivers, she added.

Schools have some options available if they can’t hire drivers, Bow and Dunbarton Superintendent Dean Cascadden said, but none of those options are ideal.

Officials in the school district could combine existing bus routes, making each route longer, Cascadden said. They could consolidate bus stops, forcing families to find a way to guide children to common areas. They could cut down on extracurricular transportation, such as driving sports teams or children, which would pose accessibility problems for children without the means to have a parent drive.

Or the district could eliminate some home-to-school busing entirely. State law requires only that school districts provide transportation for children in kindergarten through eighth grade; schools could theoretically end high school transportation altogether.

That, Cascadden said, is an option only of last resort.

“For some (high school) kids, that’s the only way to get to the school, is on the school bus, and it becomes an equity issue,” he said.

But the other options aren’t desirable either, Cascadden says.

“If you want to pull people out and get them angry, change their bus stop,” he said. “So it’s not a great option for us. But that’s what you have to do: You’re required to do it K-8, that’s what you absolutely have to do, so you look at the other areas to (give up) first.”

Holden stressed that no school in the state is choosing to eliminate bus services yet, and each is searching for workable solutions. But, she said, there might be a mandatory adjustment coming.

“We’re going to get creative,” Holden said. “And we’re going to ask our communities to stay flexible with us.”

For drivers still in the business, the job has brought unexpected rewards, including spontaneous recognition from those they serve in the community.

“I see children that have grown up over the years that I’ve transported, and when they see me in the community, they always remember who I am,” said Jessica Dreckmann, a Manchester driver.

Others say the experience on the bus itself – whether on the afternoon route after school or the evening drive to an away soccer game – creates a special feeling of belonging.

“The kids become your own,” said Sandra Rowe, a board member on the NHSTA. “Only these kids you can send home at night.”

“But,” he added, “it’s very rewarding. Because, again, I think the bus drivers get a lot of respect.”

When the coronavirus arrived in New Hampshire and schools began to shutter, Routhier saw the fork in the road. Many of his colleagues took the exit ramp, the risk of viral infection providing the final push they needed to leave.

Routhier, though, wasn’t ready to give up the unexpected second career. He trusted the school’s cleaning routines, and decided not to walk away. “I felt a commitment,” he said. “There was still a need.”

On Sept. 2, 13,000 Manchester students will return to school with full classrooms. Routhier will be back behind the wheel, even as many drivers may not.

“There’s no reason to stop,” he said. 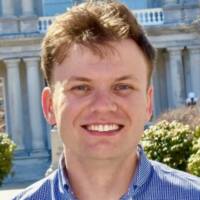 Ethan DeWitt is a reporter for New Hampshire Bulletin.