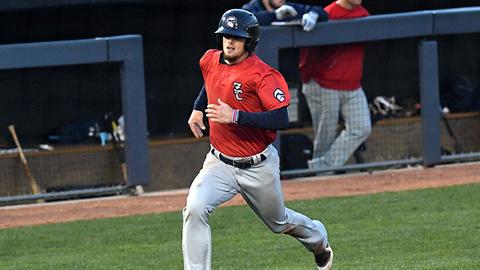 ALTOONA, Penn. – The New Hampshire Fisher Cats certainly showed some improvement following a poor Friday series opener against the Altoona Curve. Just not enough improvement to get the win.

The Cats put a run up on the board in the first, but Altoona responded with six unanswered runs in the fourth and fifth, punctuated by Will Craig’s tenth home run of the year.

Cavan Biggio brought New Hampshire back into the game in the top of the sixth with a first pitch blast over the fence, bringing three runs home. However, Altoona would get a three-run homer of their own in the bottom of the inning from Jin-De Jhang, extinguishing any lingering momentum for the visitors.

Harold Ramirez managed an RBI double in the eighth to narrow that lead somewhat, bringing Bo Bichette home for his second run of the day, but Altoona relievers Montana DuRapau and Sean Keselica went on to retire the next four batters, finishing the Fisher Cats for good.

Biggio finished the night with four RBI, with Ramirez and Bichette each contributing a pair of hits for New Hampshire. Jhang led the way for Altoona with a 3-for-4 four RBI night, with Craig also adding three RBI and Jason Martin adding a triple during his two-hit night for the Curve.

Dillon (1-2) recorded one out following that string of hits before getting the hook, allowing six runs off nine hits during his appearance.

The win went to Pedro Vasquez, scattering seven hits over six innings of work. This was the first ever Double-A win for Vasquez, getting his last win on July 24, 2017 in the Class-A Advanced Florida State League.