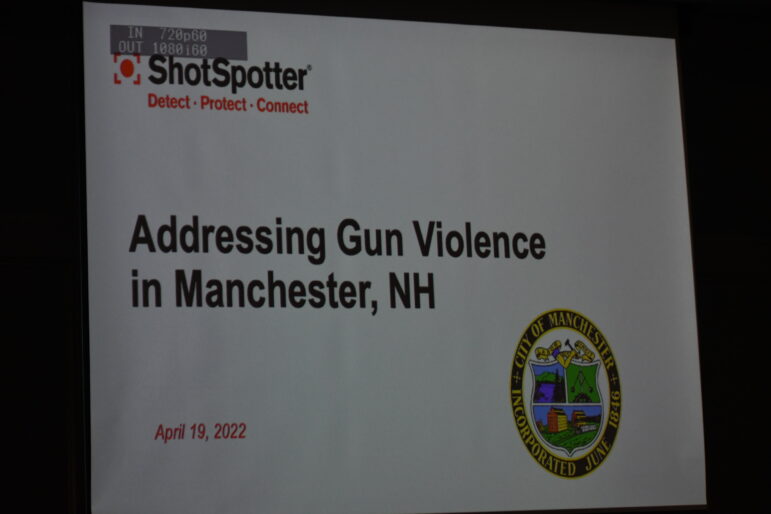 MANCHESTER, N.H. – On Tuesday night, the Board of Mayor and Aldermen received a presentation on ShotSpotter, a technology that can triangulate gunfire from sound analysis.

Manchester Police Chief Allen Aldenberg has been in contact with the office of U.S. Representative Chris Pappas (D-NH-01) to obtain a $300,000 federal grant for the technology, which would provide a two-year trial period for the city to roll out the technology over three square miles.

According to the presentation, ShotSpotter works much like a cellphone, utilizing towers placed atop buildings in areas with expected high gunfire rates and then triangulates sounds that could be gunshots to obtain their location, with the sounds then analyzed remotely by human operators. This data can then activate other technology such as drones or cameras to provide additional intelligence to police officers, who are provided detailed directions to the source of the gunshot sound.

Also like a cellphone, cities subscribe to the service, with the ShotSpotter company maintaining infrastructure equipment and indemnifying property owners if the equipment causes damage to their buildings. Additionally, representatives of the company said that the equipment can still be used normally even with significant damage.

Currently over 100 cities utilize ShotSpotter, including 11 in Massachusetts.

ShotSpotter spokesperson and former New Bedford, Mass. Police Chief Ron Teachman says that only about 20 percent of shootings are reported to police due to fear of retribution, apathy or confusion, leading to a negative cycle among residents that nothing can be done about gun crime.

Aldenberg added that often time and evidence is wasted during gun violence incidents due to a lack of information available to officers, with hospitals often aware of shootings occurring before police.

Given that the vast majority of gun violence incidents in Manchester are perpetrated by gang members, Ward 10 Alderman Bill Barry asked if the initial ShotSpotter devices will be placed near the homes of gang members. Aldenberg said he felt uncomfortable specifically policing particular individuals, instead saying that their placement would be data-driven. However, Aldenberg added that data analysis could correlate to placing the devices in areas near those gang member homes.

Aldenberg also said that the initial placement of the devices would likely be placed downtown and parts of the West Side.

If the Board of Mayor and Aldermen find the produce to be useful, they would need to find other revenue sources after the two-year trial period.

Aldermen did not ask about the report from the Inspector General’s Office in Chicago found that ShotSpotter was not an effective way to battle gun violence.

No action was taken by the board. When the grant money becomes available, representatives of ShotSpotter said that it would take a few weeks for the technology to be installed in Manchester.