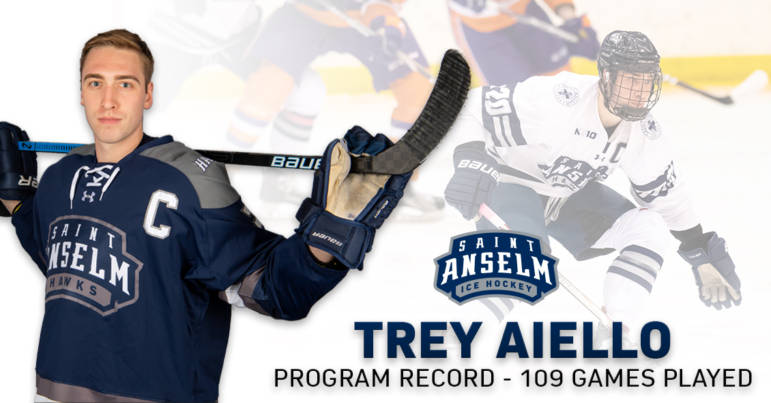 The Hawks kicked off their season with a six-win weekend in Myrtle Beach, SC.

On the basepaths, the Hawks were successful on 13 of their 15 stealing attempts and on the mound held opponents to a batting average of just .154.

The Hawks now have a week off until they travel south to Florida to play 14 games in just over a week span. Saint Anselm begins the stretch with Cedarville on Friday, Feb. 28 at 10 a.m.

On Friday, they clinched the third seed in the upcoming New England Women Hockey Alliance (NEWHA) Tournament with a 2-0 victory.

On Sunday, the Hawks once again got two goals, but this time fell, 4-2.

Senior Kaley Campbell (Colchester, Vt.) got both goals, both of which came off the power play.

They’ll face Post University in the NEWHA Quarterfinals on Tuesday.

The main story of the weekend on the men’s side of the ice was senior Trey Aiello, who has now played more games in the Saint Anselm sweater than anyone else.

Aiello was limited to just one shot and a -2 plus/minus in that game, a whimper after his hat trick against Franklin Pierce on Friday.

The Williamsburg, Va. resident scored the game-winner with 33 seconds left in regulation to give the Hawks a 4-3 victory. Senior Mike Ferraro (Northbridge, Mass.) had the other goal to tie the contest up in the third.