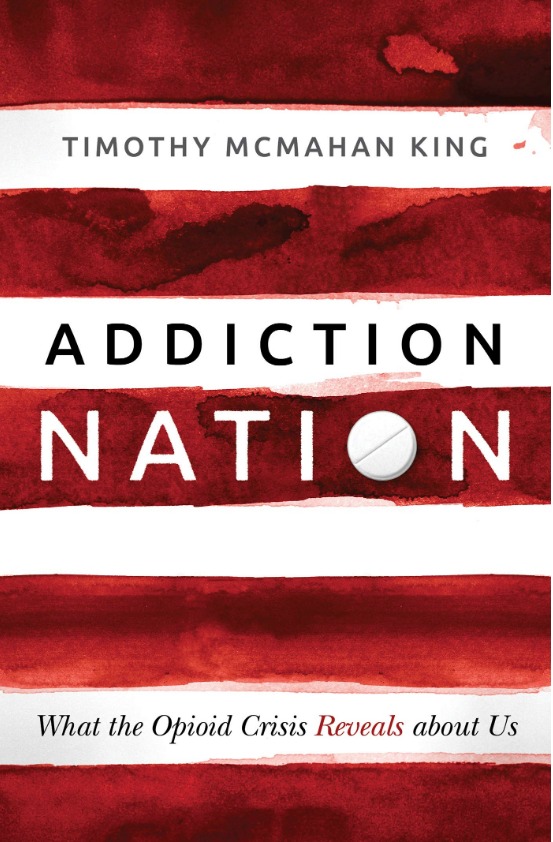 MANCHESTER, NH – “Opioids claim the lives of 115 people per day. One of them could have been me,” says Timothy McMahan King, author of Addiction Nation: What the Opioid Crisis Reveals about Us (Herald Press, June 11, 2019, $17.99 soft cover).

King, who became addicted to narcotics prescribed after a near-fatal illness, recovered and learned to manage pain without opioids. In his new book, he asks profound questions about the nature of addiction and explores the cultural and spiritual roots of the epidemic.

“The first thing to understand is that it is not just about opioids,” King says. “It’s just the most recent manifestation of a devastating public health crisis of drug overdoses that has been sweeping across the United States for decades. It is borne of a crisis of meaning, a collapse of culture, constant consumption, corporate corruption, the end result of a so-called War on Drugs, a breakdown of public institutions, and a stifling of opportunity.”

King investigates the ways that addiction robs us of freedom and holds us back from being fully human. Weaving together personal stories, theology, philosophy, and cultural analysis, King examines today’s most common addictions and their destructive consequences. As a Christian, he analyzes the failures of religion while illuminating the power of grace.

After his recovery, King moved back to his hometown in New Hampshire, which vies with Ohio for second-highest drug overdose rates per capita and where a bag of fentanyl costs less than a six-pack of beer. In Addiction Nation, he grapples with the addiction crisis from a variety of angles, including:

Addiction Nation points us toward healing from the ravages of addiction and toward a spirituality sturdy enough to sate our deepest longings. “While the opioid epidemic is new, we can still turn to the old virtues of faith, hope, and love to guide us through,” King says. “The fact remains that we are all humans in need of grace and a new life in resurrection.”

Appetizers will be provided starting at 5 p.m. Drinks will be available for purchase at the bar. King will share a bit about his book around 6 p.m.

Timothy McMahan King is a writer, nonprofit professional, and the owner of Vagabond Consulting. He has worked as a community organizer in Chicago, a chief strategy officer with Sojourners, and currently serves as a consultant for the Center for Action and Contemplation. King’s work has been published in Christianity Today, Sojourners, and other venues, and he has been interviewed by ABC, the BBC, TIME, CNN, and the Daily Beast. A graduate of North Park University with degrees in theology and philosophy, King lives with his wife, Hannah, in Manchester.