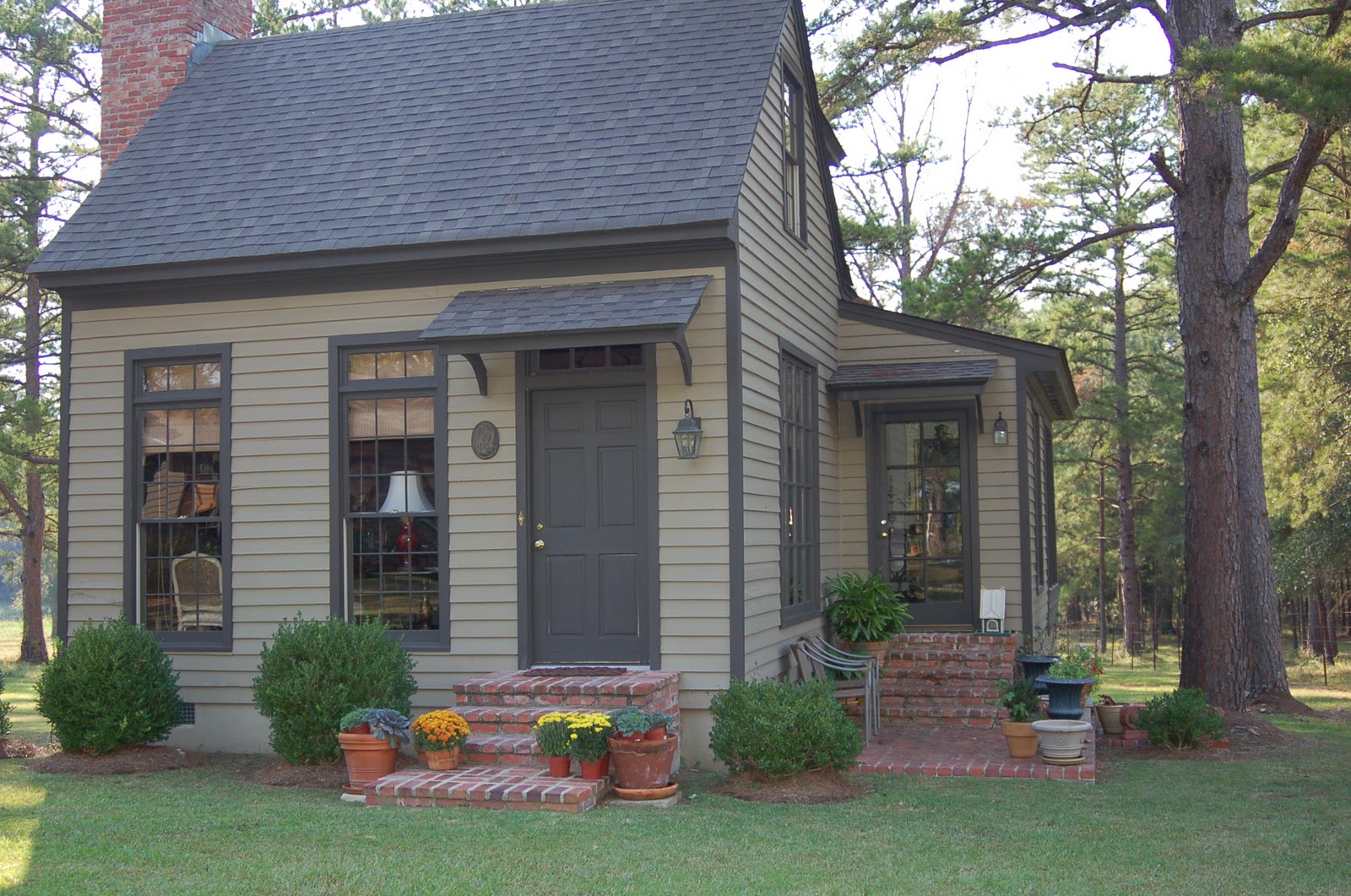 MANCHESTER, NH – Changing times require new thinking about how things are done, and a group of Manchester homeowners wants the city to rethink the idea of how to solve its housing shortage. The group, known as MHTforADUs (short for “Manchester for Accessory Dwelling Units”) is seeking to promote In-Law Apartments as a way to make housing more accessible and affordable to city residents.

As housing costs continue to grow, residents across the state are struggling to make ends meet, often making hard choices between housing and other basic necessities. With 1-in-12 New Hampshire residents living in Manchester, the city is sensitive to the challenges of the state’s housing shortage.

According to James Vayo, a Manchester resident and project organizer for MHTforADUs, “Our current housing market is broken as it fails to provide housing options that align with the needs of current and prospective residents.” Vayo believes housing issues are more than a supply and demand relationship. He places an emphasis on the challenges of regulation in building more housing. Vayo further notes, “Policy and regulation play a major role in shaping today’s housing availability and the capacity to build alternatives to single-family housing. The MHTforADUs membership believes In-Law Apartments are a fitting solution for today’s housing needs.” 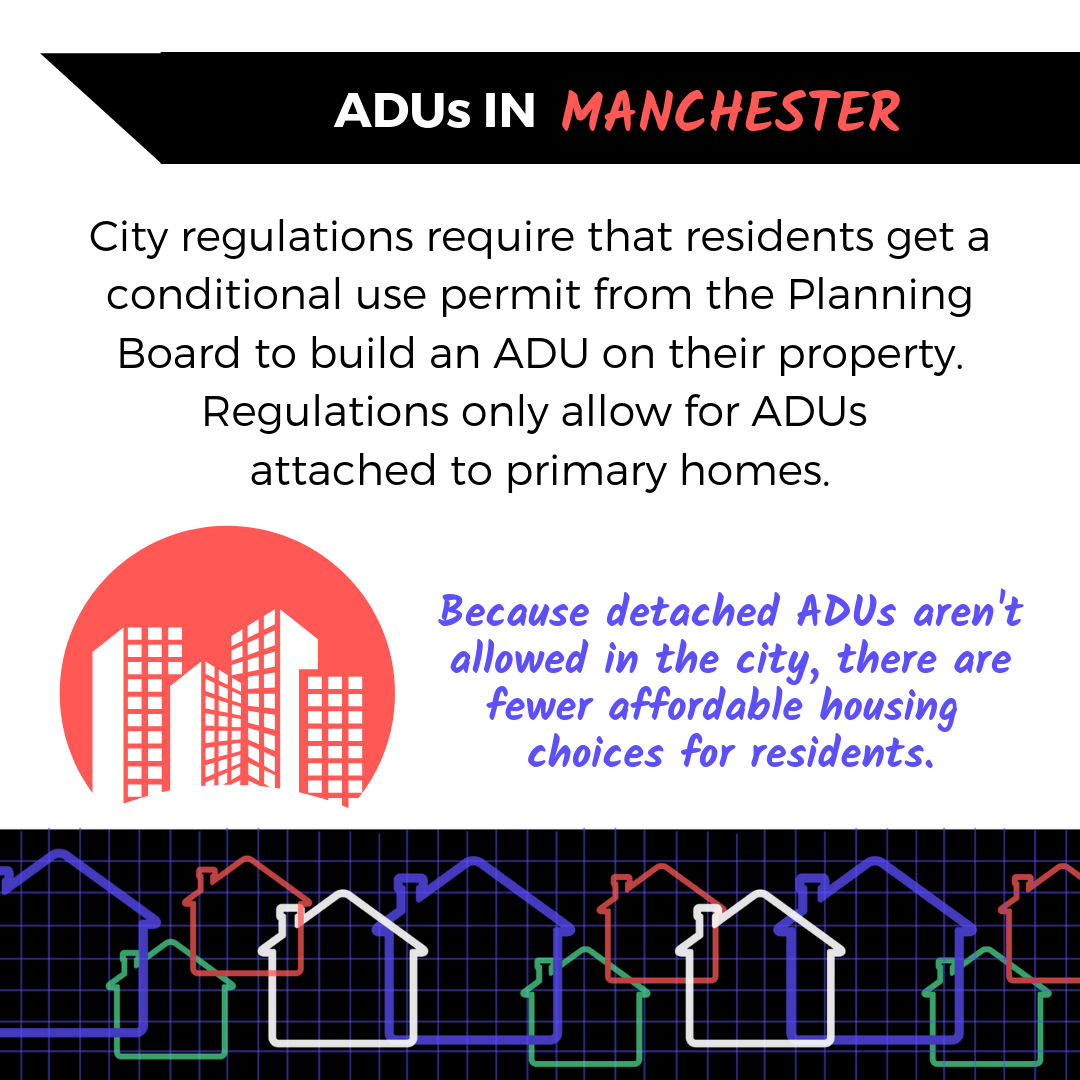 A lack of clarity on the regulation of In-Law Apartments has contributed to the confusion with local regulation and enforcement. In June of 2017, RSA 674 (known as the “Accessory Dwelling Units” statute) became law in New Hampshire. The state legislature defined the intent of the bill as, “to expand the supply of housing in New Hampshire communities without further land development, as well as to encourage efficient use of existing housing stock and infrastructure, and provide an affordable housing option in communities.”

Under the law, single-family homeowners in any municipality have the right to create an Accessory Dwelling Unit or ADU for a family member, caregiver, or as a rental unit, in accordance with local ordinances. By defining In-law apartments as “Accessory Dwelling Units” RSA 674 makes way for new types of units to exist. The RSA defines these ADUs as, “residential living units attached to or associated with a single-family dwelling, providing independent living facilities for one or more persons (e.g., an apartment over a garage, in a basement, in an outbuilding).”

The idea of where and how people can legally live is at the heart of MHTforADU’s mission. They believe addressing housing needs can, and should, be possible by the typical homeowner without having to spend thousands of dollars seeking approvals and permits.

The current state of the housing market is contributing to a sense of urgency and the need to identify ways to add new housing supply. “Manchester’s vacancy rate for 2-bedroom rental units is below 2 percent, where a normal vacancy rate would be 5% to 7%. The vacancy rate is exceptionally low and low vacancy rates generate multiple problems in the housing market such as overcrowding, land speculation, and an inability to move to different units within a city. In order to stabilize the housing market with enough supply, the City would need to build 2,000 more units tomorrow,” states Vayo.

To turn these housing challenges into opportunities, MHTforADUs is heading up an effort to educate homeowners on the regulatory framework and approval process for ADUs in hopes that it will provide homeowners with the knowledge and confidence they need to seek Planning Board approval and move ahead with their development goals.

“There are 21,000 single family homes in Manchester, if just 10% of them built an ADU, it would eliminate the housing shortage in the city. ADUs are particularly well suited to solve our current housing issues as they are smaller and located in existing neighborhoods close to jobs and services. ADUs also create several social benefits by allowing people to live in neighborhoods they otherwise could not afford, as well as helping residents transition into and out of homeownership when it works best for them” says Vayo

MHTforADUs is looking to champion the idea that ADUs are a better alternative to relying on large developers for building new housing units in multi-family buildings or subdivision projects. In an effort to put their mission into action, the group has been holding seminars to educate homeowners on the development process. MHTforADUs has seen a lot of recent interest in their free community seminars offered throughout the month of April with registration of more than 60 participants. 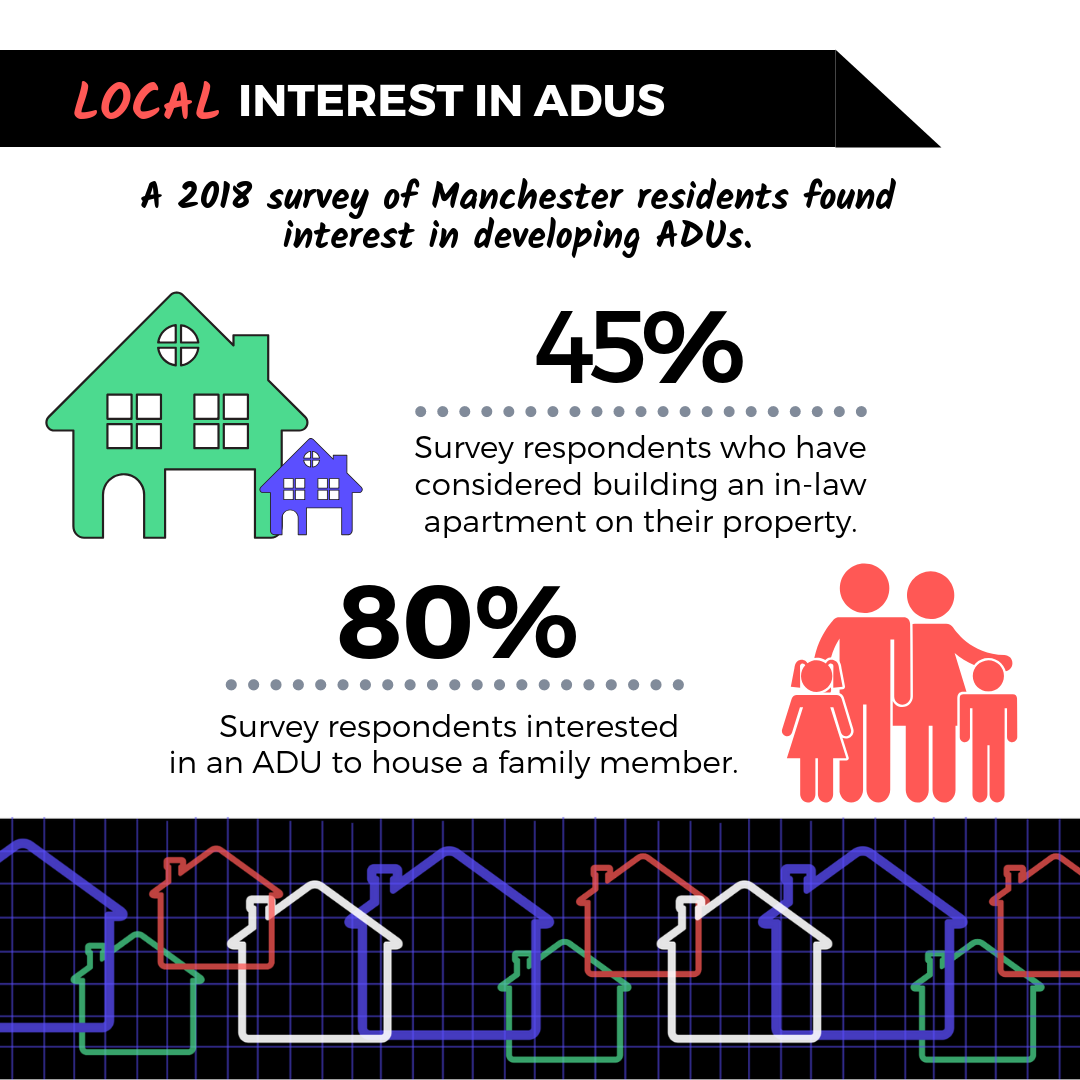 “ADUs provide a range of possibilities for the housing needs for individuals and families,” Vayo states. “Not only are younger home buyers struggling to find affordable housing, but older residents are looking for ways to downsize without leaving their community.”

“Mom and Dad may not be able to live independently anymore, but spending away their life savings to live in a retirement home likely is not the most affordable option. Anecdotally, we are finding many ADU projects in Southern New Hampshire are for older parents downsizing and investing in their kids’ houses so they can stay close to family and retain some independence,” Vayo says.

In theory, ADUs solve a number of problems. But in reality, homeowners seeking approvals for an ADU must overcome daunting regulatory hurdles, which is why MHTforADUs is advocating for changes to Manchester Zoning Regulations. Vayo notes, “fine-tuning the current regulations would make it less risky for homeowners to seek approvals to build an ADU in Manchester.”

Local development company Solid Roots Construction, led by Jeffrey Kelley, shares a similar frustration with the regulatory environment for ADU construction in the City of Manchester. According to Kelley, “Manchester’s current regulations increase costs to our potential clients by thousands of dollars versus what it would cost them to construct an ADU in a neighboring community. Manchester has an expensive and complex process that requires thousands to be spent on a licensed surveyor and engineering services for a site plan in order to seek a conditional use permit from the planning board.” Kelley added, “Clients are hesitant to commit to building an ADU and spend thousands when they are uncertain if their application will be approved.” 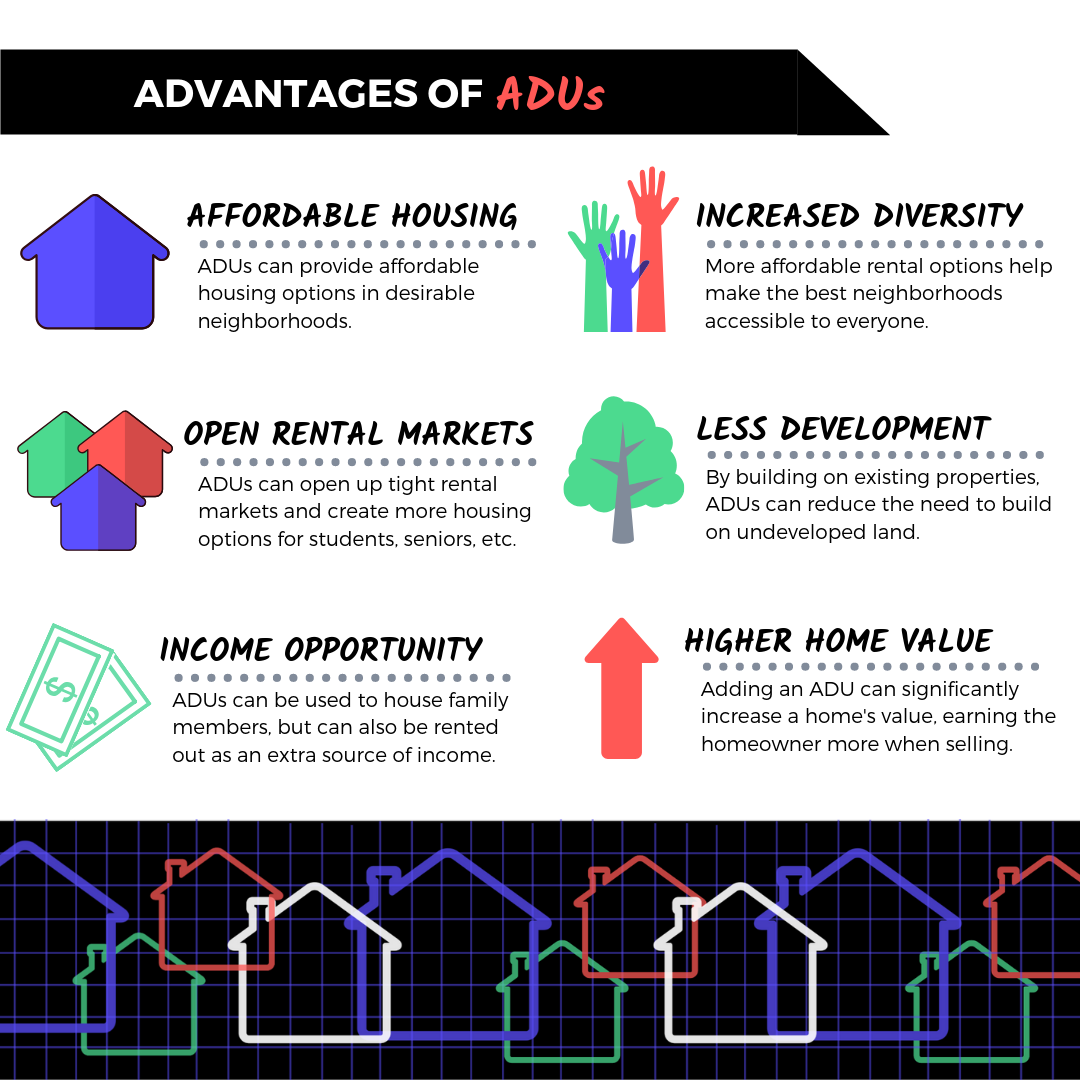 Changing the language of the City’s zoning ordinance requires the Board of Aldermen to vote on an amendment to the City’s zoning regulations. Alternately, any resident can gather 25 names on a petition and then request a zoning amendment be placed on the ballot.

MHTforADUs is actively gathering signatures for a petition to amend the zoning regulations, with the group stating the changes to zoning are needed to ease the ADU approval process for homeowners in Manchester.

“It’s about maintaining connections, and ADUs are an age-friendly solution to help people stay in their neighborhoods with physical enhancements for the next phase of their lives – handrails, handicap accessible entries and bathroom –  things that don’t exist in older houses in Manchester, homes that are often not cost-effective to retrofit,” Vayo says.

Vayo notes that MHTforADUs website is a community forum where Manchester homeowners can share their own experiences and get advice from others who are interested in building an ADU and are gathering information and resources about the development process.

⇒The next MHTforADUs community “Building an In-Law Apartment Informational Seminar” is set for May 29 at Goffstown Town Hall, from 6-8 p.m. Join the Facebook Event page here.

For questions about what is next for MHTforADUs, please contact MHTforADUs organizer James Vayo at MHTforADUs@gmail.com.