MANCHESTER NH – I love history. It’s something I’ve been interested in since I was little, so much so that I majored in history for my undergraduate degree.

There are a few reasons why I’m interested in history: on my mother’s side I’m a second-generation Parisian Franco-American while my father is Canadian Franco-American. I grew up in a small historical town in New Hampshire. Also, some of my favorite vacations from my childhood were rooted in historical interest: Gettysburg, Philadelphia, Fort Sumter, Seattle, and more. Long story short, my life has been somehow always focused around the past.

Within the past year, my boyfriend, Bill, and I have made an effort (or rather, I have made the effort and he gets to be my tagalong) to explore more of Manchester. Although we take the time to explore places on our own in Manchester, we also make sure to sign-up for the events that are offered by the Millyard Museum. We’ve participated in five events within the past year that were presented by the museum, and each time we enjoy ourselves and learn something new.

In the middle of October we were fortunate to get spots for the West Side Walking Tour with Robert Perreault, a local historian who specializes in New England’s Franco-American culture. This tour was centered around learning about the city’s West Side and, in particular ,the history of how French Canadians created their own community and preserved large parts of their culture there.

The tour brought us around the general vicinity of Ste. Marie’s Parish, and was in total a little over two hours. We learned about the beginnings of Franco-American culture on the West Side, religion, language, family life, education and so much more.

Although we weren’t able to enter Ste. Marie’s Church (as there was a wedding taking place) I still remember from my childhood the beauty and grandeur of the inside. The great news is, the church is open almost every single day and so I somehow convinced Bill to come back so he was able to see the inside of it.

Even though we couldn’t see the inside of the church during the tour, we were able to take the time to learn about its origins as well as the education within Catholic Schools of the eight parishes that existed at one time in Manchester. Wonderfully enough, within the first 40 minutes of our tour the church bells rang to signify the marriage, and it was incredibly picturesque to be able to witness one of the many purposes of the church in real time on such a lovely October day.

Once learning more about the origins of the Church, we made our way to one of the surrounding neighborhoods. If you’ve ever been to the West Side, I’m sure you have seen the neighborhoods filled with multi-family homes, most in the style of double or triple-deckers. Perreault made sure to take the time to speak to the significance of multi-family homes in the Franco-American culture that were often filled with many children, big kitchens and family members residing in each of the units. Interestingly enough, Perreault was also able to provide some context to the home we stood outside of as he and his wife lived there at the beginning of their marriage and was able to describe what it looked like on the inside as well as his own experience of living in a predominantly French-Canadian neighborhood.

We were also able to visit the presumed grave of Monsignor Pierre Hevey on the grounds of Catholic Medical Center. Monsignor Hevey was the second pastor of Ste. Marie’s Parish, and a very significant part in the history of the Franco-American people on Manchester’s West Side for his part in starting Notre Dame Hospital, which is now CMC, St. Mary’s Bank, and even several orphanages.

It was also interesting to learn more about the origins of Lafeyette Park. General Lafeyette was a factor in helping the U.S. win its independence and a monument was erected in his honor in 1957. Although the park is named for Lafeyette, he, unfortunately, didn’t get the privilege of being given the honor for his monument in the middle of the park: this was given to Ferdinand Gagnon.

Gagnon started the first French-language newspaper in Manchester – which only lasted about seven months. Although Gagnon’s newspaper was a flop in Manchester, he was able to create a successful newspaper in Worcester, Mass. Along with this success, Gagnon has been credited with being the father of the Franco-American press who ensured the news was presented in French, while also providing news from America and Canada.

Our last stop on the tour was visiting the first site of St. Mary’s Credit Union Bank, established by Monsignor Hevey. At the time, Manchester didn’t have a bank that would hold or lend money to Franco-Americans and St. Mary’s Bank not only was the first Franco-American bank in Manchester, it’s also the first credit union in the United States. The site of the first St. Mary’s Bank is now America’s Credit Union Museum which you can visit Tuesday-Thursday, however, you have to make an appointment ahead of time to get a guided tour.

This tour provided by the Millyard Museum was special. Maybe because of my connection to the history that was presented, but it also reminded me of the history that surrounds us. An important piece of taking these local tours is the reminder that the history that has happened in Manchester wasn’t too long ago, and that history absolutely does repeat itself.

The Franco-American people of Manchester, and surrounding areas, had a lively culture which they worked so hard to keep alive for several generations. However, with their lively culture they also suffered oppression from those outside of their immediate community.

Even if you don’t take the time to take part in a historical tour, I encourage you to take the time to learn about the history in your local community and contemplate the similarities between past events and all that is happening today. 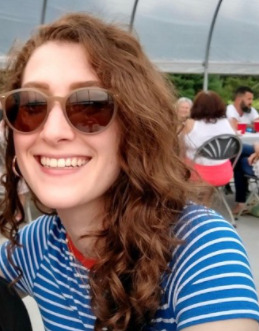 Chelcie Pinsonneault is a city dweller who loves gourmet hot dogs and prosecco.