I had been undecided on whom to vote for in the upcoming NH Presidential Primary on Tuesday, February 11th, until last week. As a proud Granite Stater, I take our First in the Nation status seriously by speaking to the candidates and asking hard questions. I strongly believe Elizabeth Warren is the Franklin Delano Roosevelt of our time, and she has earned my vote for president.

I want someone who can win in November 2020 and then govern our country in 2021 and beyond. As a new father, I am worried about what kind of world will be left for my daughter’s generation. America needs a visionary, bold leader with a track record of getting things done for the American people. We need this century’s FDR to tackle our challenges and I believe that is Elizabeth Warren. President Roosevelt positively changed the trajectory of America and we are once again at an inflection point in our country’s history.

We need big structural change to unrig our system and to help level the playing field for our vanishing middle class. Warren’s positive message resonates with me because, as the first person in my family to graduate from college, I still have an unimaginable amount of student loan debt. I had to move to a 20-year repayment plan since, right out of school, my monthly payment was $600/month. 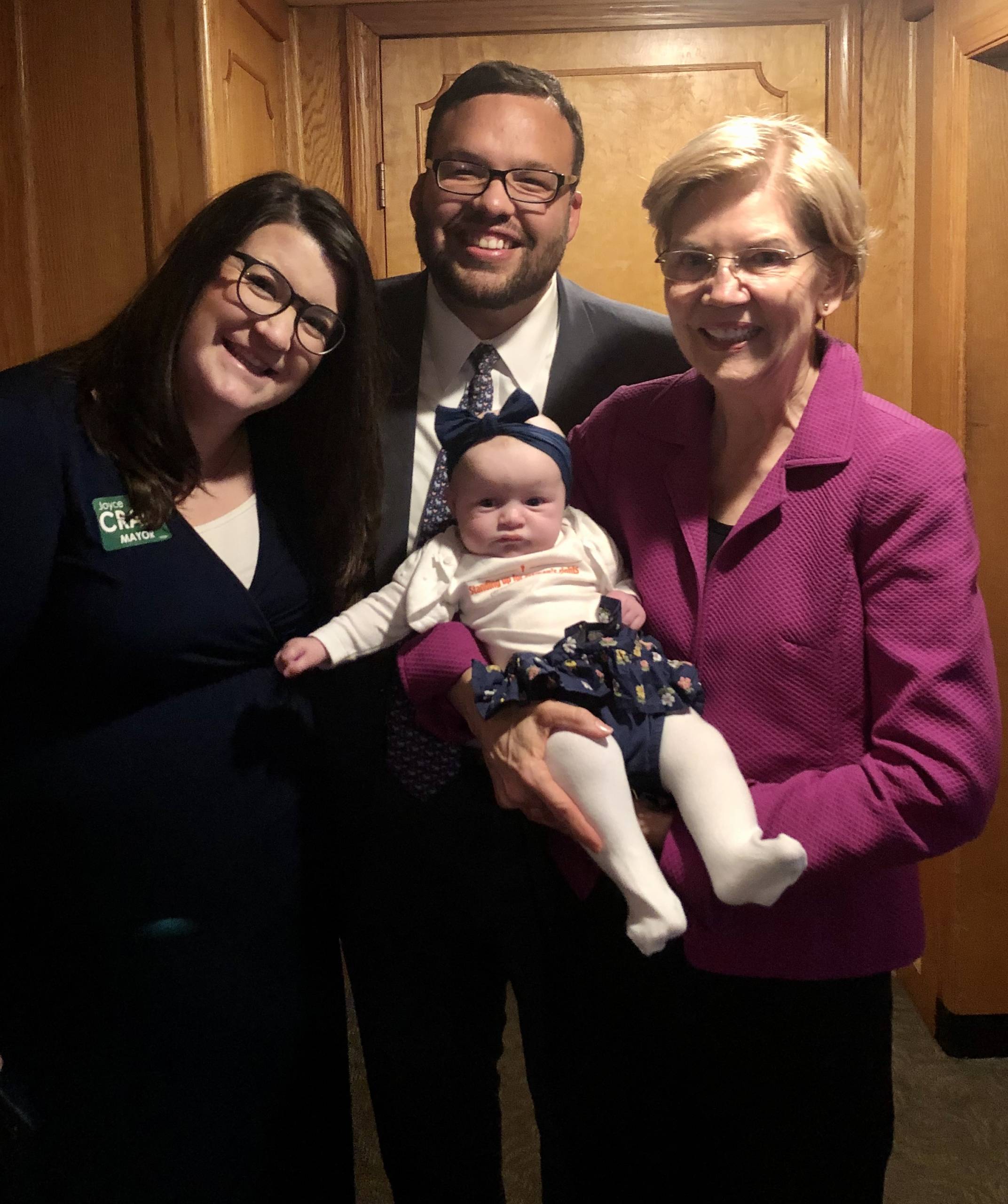 My wife and I are blessed to have parents that take turns providing child care for our daughter throughout the week because we can’t afford to pay down our loans, a mortgage, groceries, to gas our cars, and then pay $1,000 a month for child care. I am not the only person who faces these choices, but this fight is nothing new to Elizabeth. Her Aunt Bee helped her the way our parents do. She has spoken about how, if not for her Aunt moving across the country to help watch her kids, Elizabeth’s life would have been different. Warren raised the alarm two decades ago in her book The Two-Income Trap: Why Middle-Class Parents Are Going Broke. She has plans that will make a difference in the lives of regular Americans by expanding access to universal child care and investing in early childhood education. We need that, and we need Elizabeth.

As a millennial, I don’t want a handout; I don’t want special treatment, I just want to be able to pay my fair share, work hard for a livable wage, enjoy the time life affords me with friends and family — more than anything, I want to leave the world a better place for my daughter. Warren rose up from poverty in Oklahoma, being a single mother who furthered her education by attending a local commuter college for $50 a semester and then spent decades working hard to improve the lives of millions of people, all before she ever ran for office. Elizabeth gets it. She’s a fighter, and it’s refreshing to see someone who wants our vote who has detailed plans for how to solve the problems that face our Nation. If there is something that you care passionately about, I have no doubt she has a plan for it from universal child care, public education, affordable housing, student loan debt relief, getting big money out of politics, upending the corruption in Washington, a person could spend hours reading all of her plans.

Besides having solutions to the problems that profoundly affect our country, I have never seen a candidate who loves getting out there and talking to people as much as she does. I like her as a person, she is genuine, but more importantly, I believe she is running because she wants to make sure the American people are better off, and she has brilliant ideas on how we can achieve that.

Collectively, Elizabeth Warren’s legislative plans for America would be this century’s New Deal. This is something we need not only for my generation but for my daughter’s generation. I am not voting for Warren because she is a woman, though I appreciate the candidate I believe is best suited to bring big structural change just happens to be a woman. As meaningful as it was for me to see Barack Obama as president, I want my daughter to grow up knowing that running for president is just what girls do.

This NH Presidential Primary, I invite you to join me to dream big, fight hard, and win with Elizabeth Warren!

Beg to differ? Agree to disagree? Send your thoughtful prose on topics of interest and importance to carolrobidoux@manchesterinklink.com, subject line: The Soapbox.