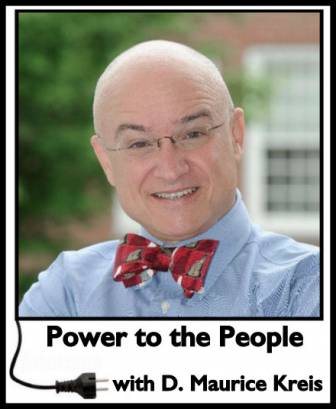 Institutions don’t love you back.

For that insight, I am indebted to Dr. Joseph V. Simone, former director of the St. Jude Children’s Research Hospital, and to one of my daughter’s physicians, who shared the first of Dr. Simone’s Maxims for Understanding Academic Medical Centers with me.

Investor-owned utilities are not academic medical centers. But a ratepayer advocate like me learns quickly that Simone’s First Maxim applies when dealing with institutions like Eversource Energy, Liberty Utilities and Unitil.  Especially when the topic is energy efficiency.

“One must keep in mind that institutional relationships are really with persons, who can and sometimes do love you back,” wrote Dr. Simone.  How true of the people these utilities task with leading the ratepayer-funded energy efficiency programs the companies administer.

Kate Peters of Eversource is a kindly peacemaker.  Eric Stanley of Liberty is generous in sharing his deep insights.  Mary Downes of Unitil is gregarious and forthright.  Each has colleagues who likewise put their good character front and center when representing their employers.

The institutions that employ these nice people, however, are perfectly okay with a state that ranks a dismal 21st among the 51 states (and the District of Columbia) when it comes to energy efficiency.  The ranking is from the highly respected American Council for an Energy Efficient Economy.  It means that New Hampshire is dead last among states in the northeast above the Mason-Dixon Line.

Ratepayers deserve better, in a state whose official ten-year energy strategy places energy efficiency front and center.  Well it should, because energy efficiency – squeezing more work out of each unit of energy consumed – is by far the cheapest way of serving the next kilowatt-hour of electric demand.  It’s similarly cost-effective for consumers of natural gas.

On January 1 of this year, New Hampshire became the last New England state to launch an Energy Efficiency Resource Standard (EERS) – basically, a commitment to implement all cost-effective energy efficiency.  But the deity is in the details, especially in a state that (unlike Maine and Vermont) relies on the utilities themselves to deliver energy efficiency services to customers.

Those details play out every fall in a proceeding before the Public Utilities Commission (PUC) to update the utilities’ plans and programs in time for January 1 implementation.  We are about to begin Year 2 of an initial three-year EERS plan.

This year, the Office of the Consumer Advocate decided to get serious about what is known in the trade as non-wires alternatives – NWAs.  The idea is that energy efficiency measures can be targeted to specific places in a utility’s service territory so as to allow the utility to delay, or avoid altogether, making expensive investments in transmission and distribution infrastructure. That infrastructure is usually referred to colloquially as “poles and wires” but it also includes transformers, capacitors, sensors and other costly items.

Right now, the EERS is a great business proposition for the utilities.  There are rate adjustment mechanisms in place to make them whole for the fixed costs they continue to incur as customers consume less.  There is a performance incentive mechanism that rewards shareholders for doing a good job with the energy efficiency programs.

But they cried foul when we so much as asked them about NWAs, as part of the formal discovery process in this fall’s energy efficiency docket.  Discovery – information gathering – is a routine part PUC proceedings, and we are entitled to ask discovery questions of utilities as long as the questions are calculated to lead us to admissible evidence.

The utilities – Eversource in particular — objected to our questions about NWAs and even went so far as to claim that the OCA is forbidden by contract from pursuing this issue.  They argue that by signing two previous settlements, agreeing to a three-year plan with “abbreviated” update dockets this fall and next – we bargained away our right to raise this issue now or, presumably, a year from now as well.

Why do the utilities hate this NWA idea so much?  Because they cannot get beyond their 20th Century business model, in which they buy toys (poles, wires, transformers, capacitors, etc.), put them into rate base, earn a comfortable return on these investments, and get the investments themselves back from ratepayers over time via depreciation charges that are also embedded in rates.

Travis Kavulla, an outspoken utility commissioner from Montana, put it succinctly the other day on Twitter.  “Rate base is a hell of a drug,” he tweeted.

Last Friday we filed written testimony from one of the nation’s top experts in the use of energy efficiency measures as an alternative to expensive transmission and distribution investments.  Chris Neme of the Energy Futures Group, a consulting firm, is telling the PUC that targeted NWA energy efficiency investments offer a “unique ability to buy time.”

In other words, when customers on a particular circuit get more energy efficient that can allow a utility to put off the installation of expensive new distribution equipment.  The delay saves customers money.  And in some instances, as economic conditions change and the electricity grid evolves, the delay could become permanent.  That would save customers a pile of money.

We don’t begrudge the utilities the opportunity to challenge our NWA proposal in the hearing room.  What’s not cool is the utilities’ effort to shut down the discussion altogether.  Efforts like that corrode the veneer of congeniality that, by design, applies to proceedings in New Hampshire related to ratepayer-funded energy efficiency.

In support of that veneer, I can confirm that the executives, attorneys, analysts and energy efficiency experts we know at the state’s electric utilities are fine and honorable folks.  But beneath the veneer lurks a hard lesson. Notwithstanding those good relationships, pushing ratepayer-funded energy efficiency to the next level in New Hampshire might be a threat to the central profit-maximizing strategy that has long guided these companies’ existence as institutions.

And institutions don’t love you back.