MANCHESTER, NH – At some point in life we learn that being a leader has nothing to do with who’s at the top of the heap and everything to do with how those at the helm make sure everyone else is supported, elevated, appreciated and compelled to do their best work. That is how you build a foundation of leadership on which to accomplish anything.

Leading with grace – and strength –  under pressure is something Rick Kaiser knows, which is why he will be guest speaker for Leadership Under Pressure, a free program to be held at the Currier Museum on Jan. 15, 5:30-7:30 p.m.

Focus of the event will be on insights from Kaiser, who served for 30 years as a Navy SEAL. He is most often recognized as being a Silver Star Medal recipient for valor during  his time as Command Master Chief of SEAL Team 6 during the Battle of Mogadishu in Somalia, aka Black Hawk Down, among other harrowing assignments over his career as a SEAL.

The event is organized by Swim with a Mission, a non-profit organization that supports New Hampshire’s many veterans organizations, founded by Phil and Julie Taub. For the past two summers Kaiser and fellow Navy SEALS have participated in Swim with a Mission open-water races and demonstrations on NewFound Lake as a major fundraiser.

It has been the conduit for connecting Kaiser and the SEALS to New Hampshire in an important way that has so far raised more than $1 million for local veterans in need. But it has also turned out to be a life-changing journey for all involved, particularly Kaiser.

“Rick Kaiser told us at last summer’s event because of a bad jump he was going to have to have his foot amputated in Florida, where he lives. We said to him why don’t you take some time, do some research, and see what the latest and greatest thinking in amputations and prosthetics is,” says Phil Taub, an attorney with Nixon Peabody.

“Matt is the preeminent prosthetics guy in the country, and he’s right here in New Hampshire,” Taub says.

Albuquerque did some research and recommended Kaiser as a participant in a new procedure for lower extremity amputees, known as The Ewing Amputation – named for the first successful transplant patient. Dr. Matthew Carty, director of the Lower Extremity Transplant Program at Brigham and Women’s Hospital in Boston, has accepted Kaiser to be one of 16 recipients of the groundbreaking procedure.

Below, preview of a documentary by STAT, a health and medicine site, featuring Jim Ewing and Dr. Matthew Carty on the Ewing Amputation and prosthetic innovation

“Rick had his foot amputated in December, and we’re lucky to have him up here for a few months while he’s getting fitted for the prosthetic,” Taub says.

Which is how Kaiser is able to keynote the Jan. 15 event on leadership.

“This is a unique opportunity for us in New Hampshire to have somebody of Rick’s caliber. He was one of four Navy SEALS at the Battle of Mogadishu, and his tenure put him in the middle of anything the SEALS did, from Osama bin Laden to the rescue of Captain Richard Phillips  – it’s amazing to have him here,” says Taub.

He says recognizing the need for an organization like Swim with a Mission was directly related to seeing Navy SEALS in action, during a skills demonstration in Florida back in 2016, a way of raising money for the Navy Seals Museum.

The Taubs had been moved to action by the stories they were hearing from local veterans at town hall meetings all across the state as they followed the candidates during the previous election cycle.

When the Primary was over, the message from veterans continued to resonate with the Taubs,

“They were asking for help at every meeting, and so we did a little bit of research. New Hampshire has 130,000 veterans in the state, and for a state of 1.1 million, that’s a high percentage. And while some of the best leaders in our state are veterans, we also have a whole group of veterans who need help,” says Taub. “We were kind of embarrassed that over all the years that we’ve raised money for so many groups, we’d never done anything for veterans.”

All that changed with the founding of Swim with a Mission, which supports the work of local veterans organizations for unmet housing needs and other services.

Through a series of connections that brought together local thought leaders like Taub and Kamen, with those like Kaiser who lead by example and strive for excellence in their personal and professional endeavors, the January 15 program at the Currier should be as inspirational as it is instructional, says ARMI Executive and Board member Gray Chynoweth, one of the event organizers.

Tickets for the event are moving quickly. Click here or below to reserve a space now. 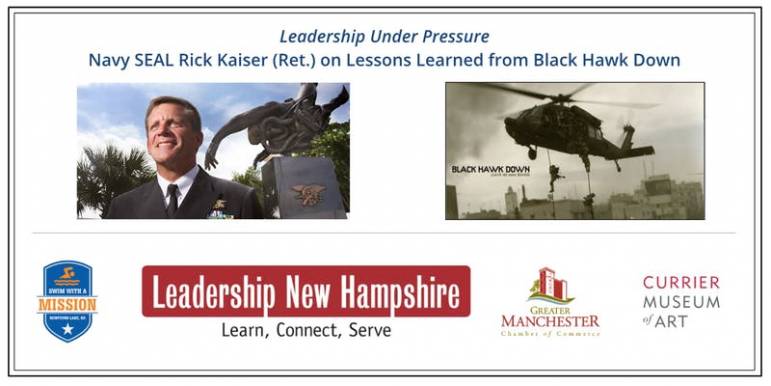