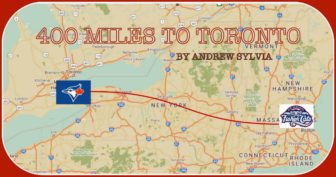 The New Hampshire Fisher Cats are no longer the worst team in Minor League Baseball. But are they any good? If the last week is any indication, there’s still hope for that. As of May 26, 2017, here’s the state of things on the path 400 miles to Toronto and beyond.

Anthony Alford is gone, and it might be too soon to tell with the hot starts from several recent Dunedin callups (more on that in a second). Instead, the current man of the moment is Jonathan Davis.

Davis had a slow start to the season, but he picked things up in Reading, with 4 RBI and hits in all three games against the Phils. In the Portland series, Davis cooled off a bit, but still contributed a homer in the second part of Tuesday’s doubleheader.

If this trio of new Fisher Cats can keep up their pace, it’s safe to say they will cement themselves in the “Who’s Hot” category soon enough.

Catcher Danny Jansen is 9-for-21 in his six games so far as a Fisher Cat following the callup from Dunedin on May 15. He’s gotten a hit in each of those games and two RBI, highlighted by two multi-hit games in Reading.

Jansen’s platooning with Lansing call-up Michael DeLaCruz. He went 3-for-4 in his debut against Trenton, and went 2-for-2 with a pair of walks and a pair of runs in Reading a few days later.

The final newcomer is technically stepping down a level to New Hampshire, even though he’s spent most of the season at Dunedin.

Andrew Guillotte went 1-for-4 in Buffalo thanks to lack of depth in Toronto’s outfield following Kevin Pillar’s controversial comments and Darrell Ceciliani’s injury while hitting a home run.

So, Fisher Cats alum Dwight Smith Jr. got the call up to Toronto from Buffalo for three games, Guillotte took Smith’s place in Buffalo just as Alford was leaving for the Jays. Then Smith Jr. went back down to Buffalo two days later, followed by Guillotte coming to New Hampshire two days after that.

Got it? Guess what…Alford’s now injured as well.

Not fazed by the frequent flyer miles, Guillotte went 5-for-6 in the Portland series, stealing a base and contributing an RBI as well.

Outside of Alford, the biggest recent change has been the loss of starting pitcher Francisco Rios. One of the bright spots in a struggling staff, Rios went on the DL on May 15. No set date is in place yet for his return, although Fisher Cats manager Gary Allenson believes he might be able to come back in the first week of June.

Taking his place on the roster is first baseman Matt Dean, called up from Dunedin on Thursday.

It will take a lot to get back into contention after the Fisher Cats early woes, but taking four of six during the last two series is a good start.

Reading now comes to Manchester for a four-game Memorial Day Weekend series, followed by a three-game set on the road in Harrisburg.

One of the keys for success in those contests will be taking advantage of situations with runners in scoring position.

The Fisher Cats had a marked improvement in that department against Reading and Portland, recording a .272 clip with runners on either second or third.

Still, it may be too soon to tell whether that weakness can become rectified completely.

“That’s probably been one of our Achilles’ heels for most of the year, especially when the bases are loaded where there is pressure on two people: the guy in the batter’s box and the guy on the mound,” said Allenson earlier this month. “But that’s a learning process there. I think more than anything, you have to tell yourself, ‘I want to be in this situation right now.’ Not that you’re going to get the job done, but getting over the pressure part, not having to do everything.”