MANCHESTER, NH – When the ribbon is finally cut on Elm Street’s newest curiosity shop Saturday morning, it will officially seal the deal on a business concept that has been brewing for years. The Terracotta Room has deep roots in friendship and the power of three women who followed the call of the universe to do something that is centered around pure joy.

The shop, which features an eclectic mix of botanicals and artisan delights, opened quietly in the midst of the pandemic in a space shared with Blush Beauty Boutique and Spa after friends and fellow West High School grads Steph Templeton and Nicole Rocha saw the chance to put into motion a dream they once dreamed as classmates, to build something beautiful together.

It just took them 20 years to figure out what. 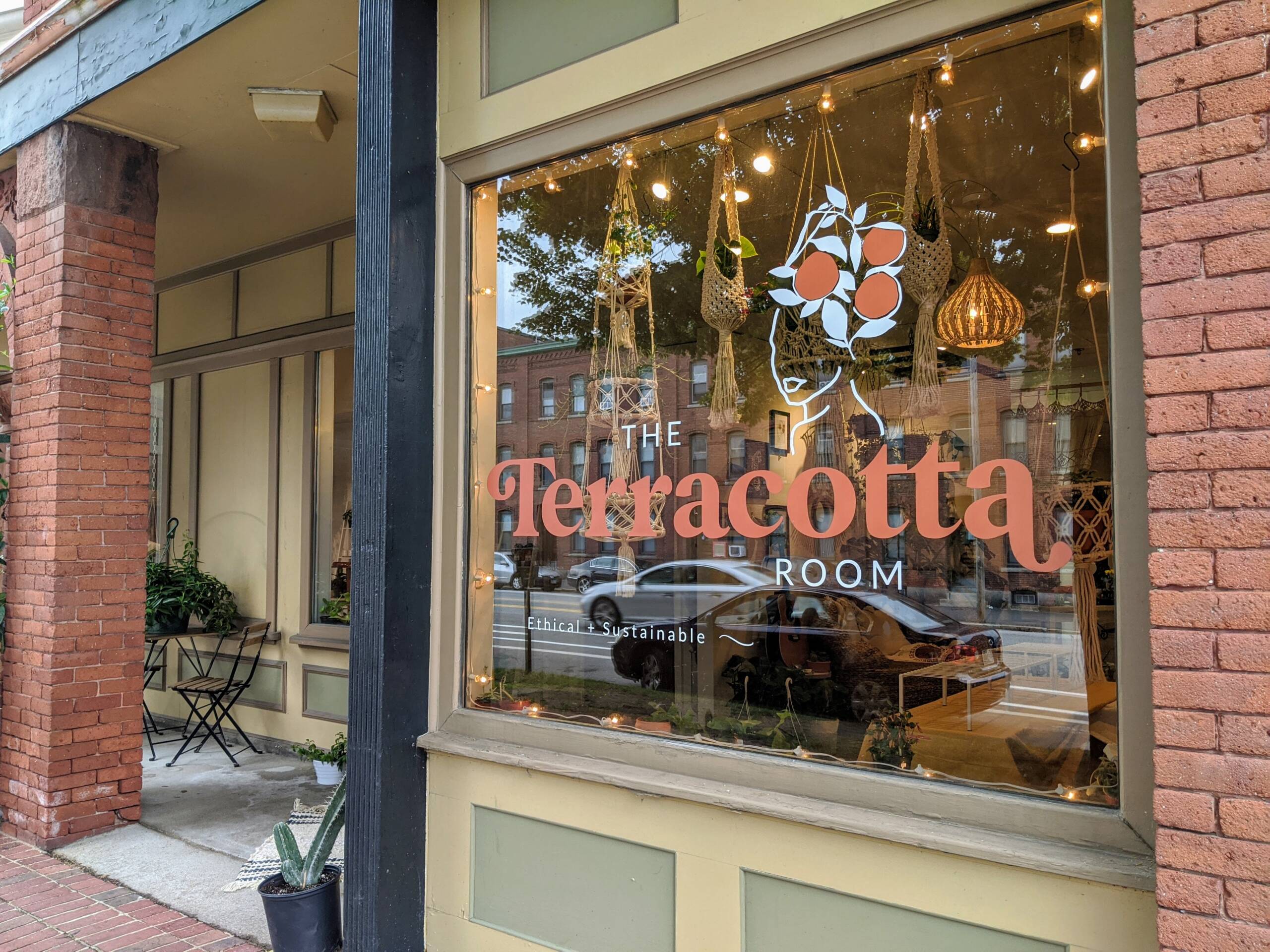 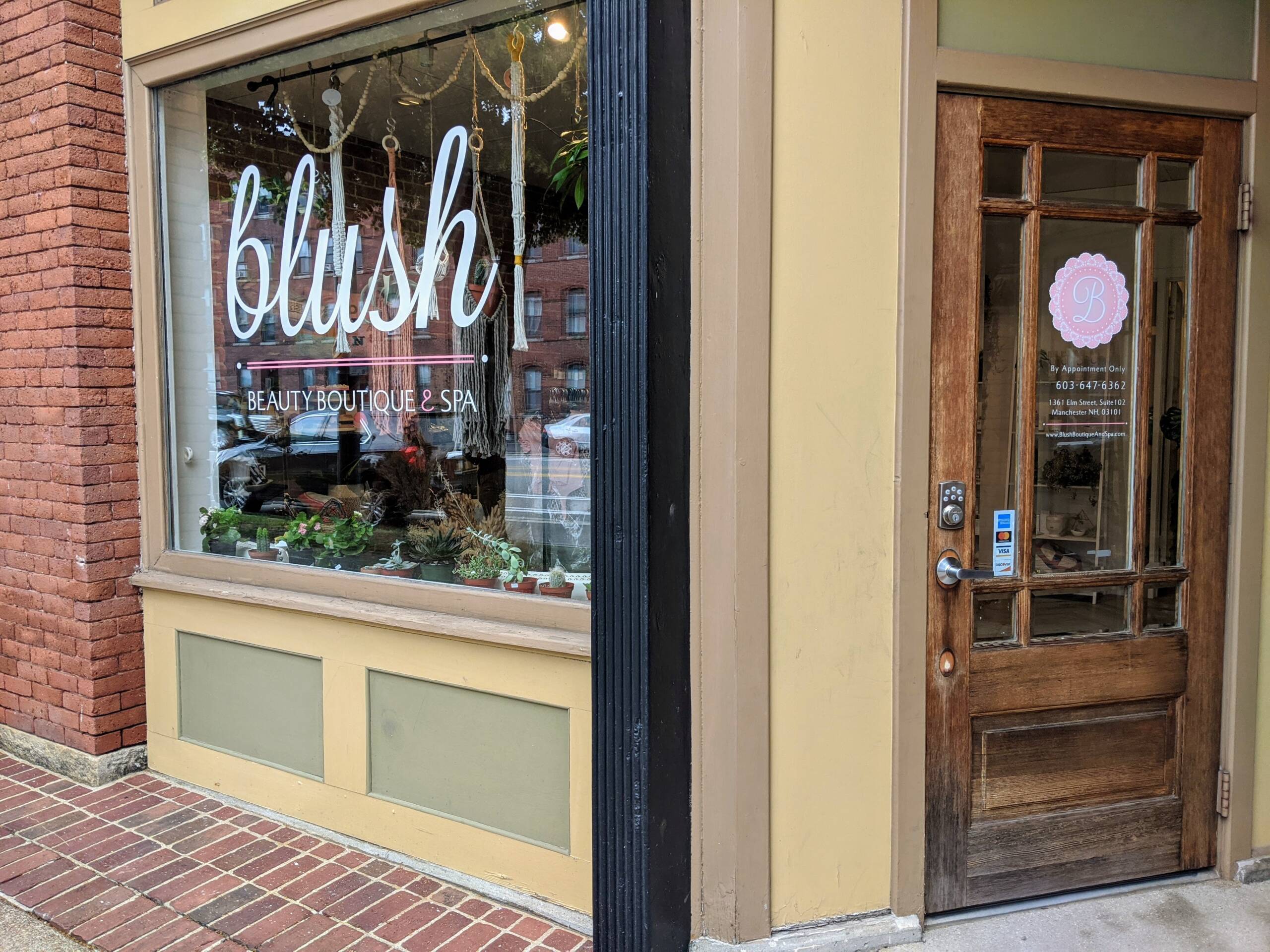 Templeton has owned and operated Blush Beauty at 1361 Elm St. for the past eight years and was already a collaborator. Her other BFF, Jenni Smith, provides spray-tanning, teeth-whitening and an array of lash services on site for Blush through Jenni Austin Strong Beauty. When COVID happened other independent beauty care contractors who had booths at her salon had to shut down.

This gave Templetop a moment to meditate on it. She decided to find another complementary business that would “bring the positive vibe” she and Smith had already established with their holistic beauty care services and saw an opportunity to reinvent her space through collaboration with Rocha.

The two were friends since age 15 and graduated from West together in 2002. Although the friendship endured, the two went their separate ways, each following a path that would eventually lead them back, full circle, to where they began.

Enter Alexis Clarke a dozen years ago, who met Rocha when the two got hired to work at an upscale boutique – Rocha was a graphic designer and Clarke was a fashion merchandiser. Fast-forward through their footloose and roaring 20s, the two women found that as they matured and settled into marriage and motherhood, their mutual interest in sustainable living and promoting beautiful, practical, functional things began take the shape of a business idea.

“They’re like yin and yang,” says Templeton of the two, who not only finish one another’s sentences, but feed off the creative energy each brings to everything they touch. The three of them forged a friendship that led them organically to this moment.

And what better time to put all that positive energy into a business enterprise, but during a global pandemic, when everything we thought we knew about how things can work shifted on its axis.

Having everyone under one roof satisfies Templeton’s soul.

While the three friends were busy Friday night preparing for Saturday’s open house pop-up shop event, customer Matt Menning stopped by to get a new plant to replace one that had perished. He found The Terra Cotta Room while searching for a cool plant for his mom for Mother’s Day.

“I searched online for ‘nursery,’ or ‘garden store’ and I found this place,” said Menning, formerly of Manchester who now lives in Bow. He scored a beautiful Hawaii-grown anthurium for his mom, and decided to come back, empty planter in hand, to see what Clark recommended.

“I like that they don’t just sell plants but they know about them, and they tell you how to take care of them,” Menning said. While he waited, Clarke potted a ZZ plant (short for zamioculcas zamiifolia) for him.

“This will tolerate low light,” she told him. “It won’t need water for another week, but make sure to check the soil.”

For Rocha, the roots go even deeper than setting up shop in her hometown. A few months ago she was digging through a box of old photos she saves for those times when she’s feeling nostalgic and came across a black-and-white vintage photo of Elm Street, circa who knows when.

“I never noticed it, but my husband said, wait – that’s Elm Street. When we were able to enlarge it we noticed the number on the storefront, 1352, which is this block. My uncle says he remembers my dad living in one of these buildings,” says Rocha, who lost her dad, Rene D’Amours, when she was just a kid. She’s hoping someone with a long memory will recognize the location and maybe even be able to fill in the blanks of her family history, which includes her grandfather, Ernest D’Amours, who was a Manchester lawyer and served as NH Attorney General during the late 1940s.

She has the framed photo on display inside the shop, a tribute to her sense of place and the feeling that she’s well-rooted in this city, and ready to bloom.

On June 26 the three women will not only welcome the community to come see what it’s all about during an open house from 9 a.m. to 5 p.m., but they are expanding their universe of collaboration by bringing several other local businesses into the space during a pop-up shopping event that will include food and fashion for purchase from other local vendors, in addition to all the plants, mugs, jewelry, gift items and other curated wares The Terracotta Room hangs its hat on.

Other grand-opening specials will include $10-off spray tans with another Jenni Austin Beauty from 11 a.m. to 1 p.m. and buy one plant, get one 20 percent off from The Terracotta Room. And for those who are heading to North End Bistro, their Elm Street neighbor, there will be celebratory signature cocktails on the menu.

Ribbon-cutting is set for 9:20 a.m. with Mayor Joyce Craig.

Below, a slideshow of some of the featured items curated from small businesses and artisans locally and around the country at The Terracotta Room on Elm Street.