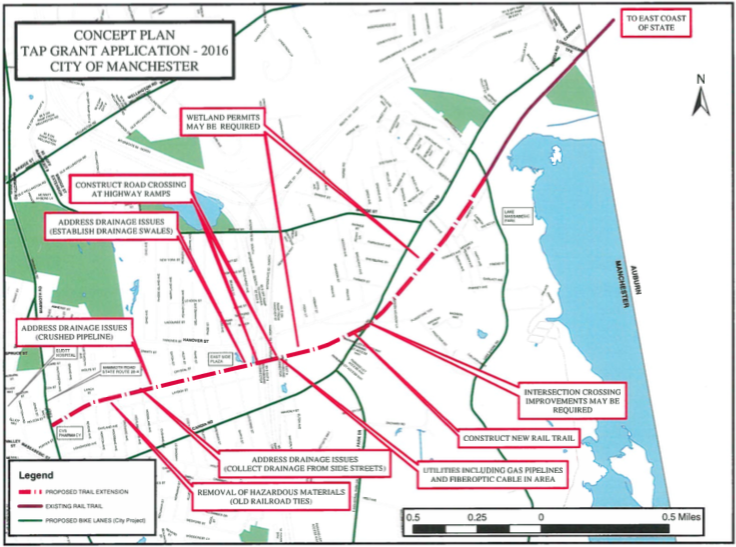 MANCHESTER, NH – The city of Manchester has been awarded an $799,998 Transportation Alternatives Program (TAP) grant, to be used to extend the Rockingham Recreational Trail.

The rail trail grant was part of a total $6.9 million in funding from NH Department of Transportation’s 2016 TAP projects, awarded to 11 cities and towns around the state, and the University of New Hampshire, which applied for the grant money.

“It is very exciting to see yet another expansion of Manchester’s rail trail network. Together with the coming extension of the South Manchester Rail Trail and the addition of several recently-installed bike racks downtown, our city’s bike infrastructure continues to grow,” said Bike Manchester co-chair Will Stewart.

Public Works Design Engineer Bruce Thomas said the design process should begin in about three months, with construction set to begin in 2019. As with all the TAP awardees, the Manchester project requires a 20 percent match of municipal funds, or $200,000, and is subject to Governor and Council approval.

The projects will be constructed across the state as “alternative” transportation routes such as on-and off-road pedestrian and bicycle paths, rail trail improvements, and safe routes to school projects. Among the dozen projects included in this round of funding are sidewalks in Littleton, a multi-use path along the Androscoggin River in Berlin, pedestrian improvements in Somersworth and Hinsdale, as well as the Manchester rail trail project, which will extend the path between the CVS on Mammoth Road and Lake Shore Road.

A total of 46 applications were submitted for TAP funds totaling $26.6 million federal dollars. Criteria for scoring by the New Hampshire TAP Scoring Committee included safety, potential for success, connectivity, and socioeconomic benefits. Manchester’s project was scored as the top project.