MANCHESTER, NH – Manchester hosted the final public hearing Oct. 26 on New Hampshire’s upcoming transportation plan. The Governor’s Advisory Commission on Intermodal Transportation (GACIT) has held 23 hearings around the state, soliciting input on its plan that will run from 2019 to 2028. These hearings are the first step in an extended planning process, and there will be future opportunities for public input.

Officials from the Department of Transportation (DOT) and the Southern New Hampshire Planning Commission (SNHPC) summarized the current proposal, followed by comments. The speakers, residents of Manchester, criticized the automotive focus of the proposal, and suggested alternatives.

DOT Commissioner Victoria Sheehan said, “We’re pleased to see the turnout. The public’s input will help us develop a plan that will meet future needs.”

State Roads and Bridges Are Failing

Many state roads and bridges are “red listed,” in poor or very poor condition, including 28 percent (1,172 miles) of state roads and 6.5 percent (140) of bridges. A Manchester red-listed bridge carries Huse Road over Route 293 and Route 101.

While red list road miles are decreasing, red list bridges are projected to increase. Pete Stamnas of the Department of Transportation (DOT) emphasized that this is the result of long-delayed maintenance, caused by financial constraints over the years. State roads and bridges are funded by a combination of state and federal funds. The state’s 12 airports and public transit are federally funded. 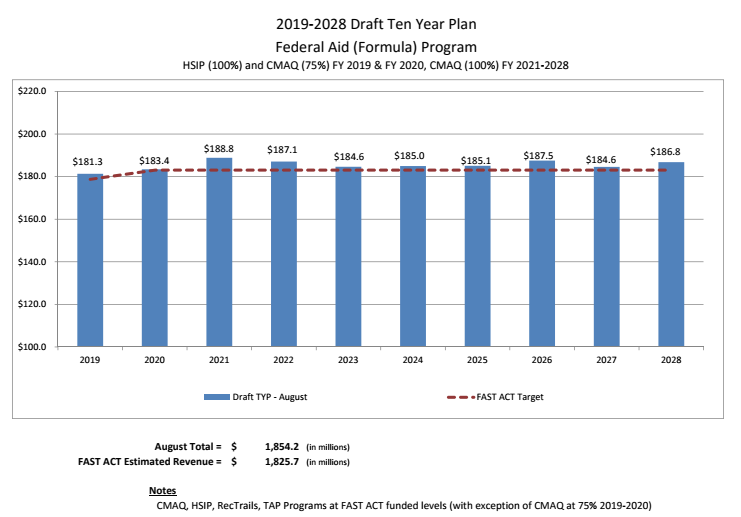 Eighteen Manchester area projects are proposed for roads, bridges, intersections, toll plazas, and rail trails, at a cost of $214,130,601.

For Interstate 293, the combined cost is $182,600,739. Projects include: Exit 1, Exit 6, Exit 7, the red-listed bridge carrying Huse Road over Route 293 and Route 101, the bridges over the Merrimack River, the Queen City Bridge, and the Salmon Street interchange and bridges.

For Route 93 the combined cost is $28,418,498. Projects include: A fourth lane northbound and southbound between Exit 1 and Exit 5, reconstruction at the split with Route 293, and the bridge over Stevens Pond.

For trail projects, the combined cost is $1,674,482. Projects include: Rail trail construction from Mammoth Road to Lake Shore Avenue; and the path along Baker Street, Dubisz Street, and Sundial Avenue.

For rail bridge projects, the combined cost is $1,436,882. Projects include: The Route 3 (Elm Street) bridge, and the Canal Street bridge, both over the Boston and Maine Railroad.

The Manchester Transit Authority is funded through the Southern New Hampshire Planning Commission (SNHPC), and its plans were described by Dave Allen.

Alderman Dan O’Neil said, “I express my appreciation for the continued funding of the Manchester Transit Authority’s elderly and disabled services, including the Shopper Shuttle, which many residents rely on each week.”

Several residents commented that the project timelines, from 2019 to 2028, do not accommodate today’s pressing needs.

Alderman Dan O’Neil noted the plans for Exits 6 and 7 of Route 293 are scheduled for completion in nine to 12 years and said, “That is too long a time period. I strongly encourage the Executive Council to consider a toll increase of […] 50 cents.” He said that additional state projects, and jobs, could be funded with the toll increase.

This suggestion was backed by Ken Rhodes, a long-time Auburn resident and engineer/businessman. He stated that such an increase would, “be readily absorbed in our day-to-day economy, and the payback through economic activity could be multiples larger.”

You can review the proposed 236-page plan below.